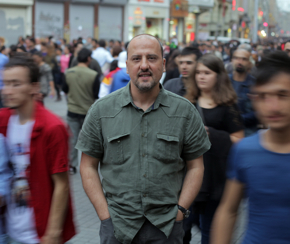 Ahmet Şık
By Radostina Pavlova “To speak the truth at the right time, and while doing this, be the eye of the blind, the ear of the deaf and the voice of the voiceless.” This is how Ahmet Şık, 2013 CJFE International Press Freedom Award winner, defines journalism. A prominent Turkish freelance journalist, photographer and writer, Şık has reported for the newspapers Cumhuriyet, Evrensel, Yeni Yüzyıl and Radikal. His work has exposed claims of torture and police brutality, human rights abuses and other threats to free expression. In 2011, just months before the planned publication of his latest book (now banned in Turkey), Şık was arrested and jailed for 376 days. “I counted every single one,” he tells CJFE. Şık is just one of the many voices the Turkish government has been trying to silence. Being a journalist in Turkey, especially an investigative reporter with a mission to uncover the truth, is a hazardous occupation. As of Dec. 1, 2012, there were more journalists imprisoned in Turkey than in any other country—a total of 49, according to the Committee to Protect Journalists, and 98 per cent of them were behind bars on anti-state charges. To express support for Turkish journalists and peaceful demonstrators, CJFE and six like-minded organizations took part in a global solidarity action. Representatives stood still in front of the Turkish Consulate-General in Toronto on July 28, 2013, each holding the name of an individual killed in the Taksim Square protests (also referred to as the Gezi Park protests), which began in May 2013. The organizations also wrote a joint letter of concern to the Turkish Embassy in Canada, with particular emphasis on the violent police response to the protests in Istanbul. Indeed, Turkey has been consistently criticized by alarmed human rights organizations and international bodies, including the European Union, for suppressing dissent, pressuring media outlets to dismiss journalists who are critical of the government, and allowing police brutality against peaceful demonstrators. The Council of Europe’s Commissioner for Human Rights released a report in November 2013 that denounced the human rights abuses and the disproportionate use of force by the police during the Taksim Square protests. Freedom House, an international press freedom watchdog, qualified Turkey as “partially free” in its 2013 annual report. The report pointed to Turkey’s criminal code, press law and antiterrorism law as some of the legislative tools the Erdoğan government has used to suppress free expression. It was this sweeping antiterrorism law that was used to imprison Ahmet Şık in 2011, and to convict and jail a number of other journalists, anti-government demonstrators and others. Many human rights advocates have condemned the antiterrorism law, and the European Union has called on Turkey to reform it in order to continue membership negotiations. In April 2013, the law was amended, limiting the scope to those who directly incite violence. But journalists continue to face arbitrary detention. Şık was arrested and jailed after police seized the unpublished draft of his latest book, İmamın Ordusu (The Imam’s Army). The book details how the Turkish police force has been infiltrated by the Gülen, an influential Islamic social movement led by Turkish theologian Fethullah Gülen, which supports the current government. The draft of the book was apparently found on a computer in the office of Oda TV, a news website, which police raided on Feb. 14, 2011—a strange claim given that Şık says he had never been in contact or shared his manuscript with anyone at Oda TV. He believes authorities found out about the manuscript through illegal wiretaps and then gained access to it by hacking into his computer. As soon as newspapers began reporting that the book had been found, Şık realized he’d be arrested. He didn’t have to wait long. The police knocked on Şık’s door in the early morning of March 3, 2011. They searched the apartment and arrested him. He was initially accused of being “a member of an illegal organization and racism (sic),” as well as “prompting the people to animosity and hostility” through his writing. The indictment later changed, and he was charged with aiding and abetting Ergenekon, an underground ultra-nationalist movement that the Turkish government has proclaimed a terrorist organization. Şık says that during the search, the police zeroed in on his computer, hard drives, memory cards, CDs and DVDs—anything that could hold data. His manuscript was seized and destroyed. Having anticipated that something bad might happen, Şık had sent the draft to friends abroad. With the help of colleagues, the book was published during Şık’s imprisonment, but he says that doesn’t diminish the significance of the police’s act. “When we evaluate the situation in terms of freedom of expression, I think that the ritual of burning books is reverberating today in the form of deleting from computers,” he says. “I view this as a huge problem in terms of freedom of expression, and that was the thing that I felt the most upset about.” The authorities are just one of the threats to press freedom in Turkey. “Political powers, power groups, the capital holders and the media bosses who get into very complex relations with these power groups” are the greatest threats, according to Şık. He also notes that press freedom is hindered because journalists are “estranged from being organized, and this personally endangers their job and generally puts the future of journalism in Turkey at great risk.” Şık’s professional and personal future is uncertain. He is currently awaiting trial and faces up to 15 years of imprisonment. “If you live in a country like Turkey, it’s hard to make plans for tomorrow,” he says. “Especially when we are going through times filled with so many violations of rights and when I am the subject of one of these violations.” Radostina Pavlova is a JD candidate at the University of Toronto’s Faculty of Law.