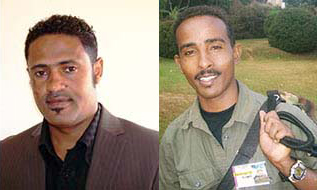 Eritrea is one of the most heavily censored countries in the world. Under the dictatorship of President Isaias Afewerki, the media is restricted and citizens’ civil liberties have been suppressed. But many journalists persist, and CJFE recognizes Dessale Berekhet Abraham, Mebrahtu Teclesion Berhe and Ruth Zecarias Ghebre with an International Press Freedom Award for their outstanding work in revealing the injustices occurring in Eritrea.

Over the past year, more than 305,000 Eritreans have fled their country, many of them unaccompanied children, according to the UN Refugee Agency. This number, though alarmingly high, is not surprising in view of the restrictive conditions and bleak futures imposed on the people of Eritrea. A former Italian colony, Eritrea was federated with Ethiopia in 1952, but within a decade was plunged into a bitter 32-year war when it was annexed by the larger nation.

The country’s current, and so far only, president, Isaias Afewerki was elected when Eritrea gained full independence in 1993. During his rule, the president has come under scrutiny for failing to implement democratic reforms, and in 2001 he severe limits on private enterprise. He has also introduced a shoot-to-kill policy for any person trying to flee the country. During the 2001 shutdown of the private press, several journalists were rounded up and arbitrarily detained in state-run prisons. Seven of these journalists have reportedly died, either due to the appalling conditions or because they took their own lives. Another group of journalists was arrested and jailed in 2009, and four more were jailed in 2011.

As of the beginning of 2013, there are about 30 journalists imprisoned in Eritrea. Access to the Internet is very limited. In the country of 5.7 million people, it is estimated that there are only about 250,000 Internet users. The government holds its firm grasp on Internet connectivity by exercising complete control over telecom operator EriTel, which owns the country’s network infrastructure. Bandwidth speeds are limited to the point that sending email isn’t practical, and most users communicate with chat applications instead. Points of Internet access are also restricted and usually only available at cybercafés in the country’s capital. Although the government has not gone so far as to institute a blanket Internet filter system, it does not hesitate to block websites, create propaganda that demonizes the Internet and maintain constant surveillance of opposition websites and anyone who visits them.

In the face of such a repressive regime, it is admirable that Mebrahtu Teclesion Berhe, Ruth Zecarias Ghebre and Dessale Berekhet Abraham continue to speak their minds and encourage other Eritreans to do the same. Unfortunately, this forced them to flee their homeland. In 2001, Berhe was detained, interrogated and tortured while investigating the detention of students in military camps and Wi’A prison. After completing his university education, he was sent to Sawa Military Camp. Berhe continued to shed light on the injustices against students, and during his time at Eritrea’s national library, the Research and Documentation Center, he attempted to organize a group to promote academic freedom. This quickly dissolved under personal and administrative pressure. After two failed escape attempts, Berhe successfully fled his country, settling in Uganda, by way of Sudan, in 2009.

Ghebre began her career with the Eritrean Ministry of Information after graduating from the University of Asmara in 2006 with credentials in journalism and mass communication. But when she experienced inequality in the workplace and restrictions on her work as a journalist, Ghebre became relentless in her dedication to highlighting women’s rights issues in Eritrea. She began broadcasting shows that focused on women’s issues, roles in society, and motherhood, to great acclaim. Unfortunately, the shows were not popular with the regime and she was blacklisted. After many threats to her safety, Ghebre fled Eritrea in 2012. She continues to tell these stories and remains a strong proponent of women’s rights in Eritrea.

Born in the 1970s, Abraham spent most of his early education at a revolutionary school run by the Eritrean opposition. In 1996, he started his first job in journalism, contributing to a national radio station, and he went on to write two regular columns in the newspapers Gheled and MeQhaliH. After the government closed private media in 2001, Abraham went to work for the state-run newspaper Haddas-Ertra. In 2006, with the help of two colleagues, he founded a cultural magazine, Takiyat (Pillar), which focused on enlightening children and youth. However, the regime soon attempted to silence Abraham, and he was forced to work as a cultural researcher at the Research and Documentation Center, a job that prevented him from speaking out. During that time, he was arrested, held in an underground cell and tortured. After his release, Abraham feared being arrested again, so he fled to Sudan, and then Uganda, in 2010. He currently resides in Norway as part of the International Cities of Refuge Network (ICORN), a network of cities around the world that hosts writers who have been targeted by politically motivated threats and persecution.

"It is all about unity, uniting our voices, uniting our hearts. If we are united we will live." -Dessale Berekhet Abraham

After fleeing Eritrea, Berhe and Abraham co-founded the website Unitedheartz to shed light on the situation at home. Ghebre became a contributor after she went into exile. When Unitedheartz was hacked and destroyed, Abraham and his colleagues brought the idea back to life under a new name and website, Unitedvoices Media Center. Like its predecessor, this website aims to bridge the gap between pro-government and radical opposition websites by providing information with accuracy, integrity, impartiality and public accountability.

This year’s International Press Freedom Awards marks the first time that CJFE has honoured Eritrean journalists for their outstanding service and commitment to free expression. The winners represent an incredible dedication to journalism despite dangerous circumstances, and it is CJFE’s honour to present them with this award.

Heidi Fortes (@HeidiFortes) is an economics and political science graduate of McMaster University and a freelance writer in Toronto.