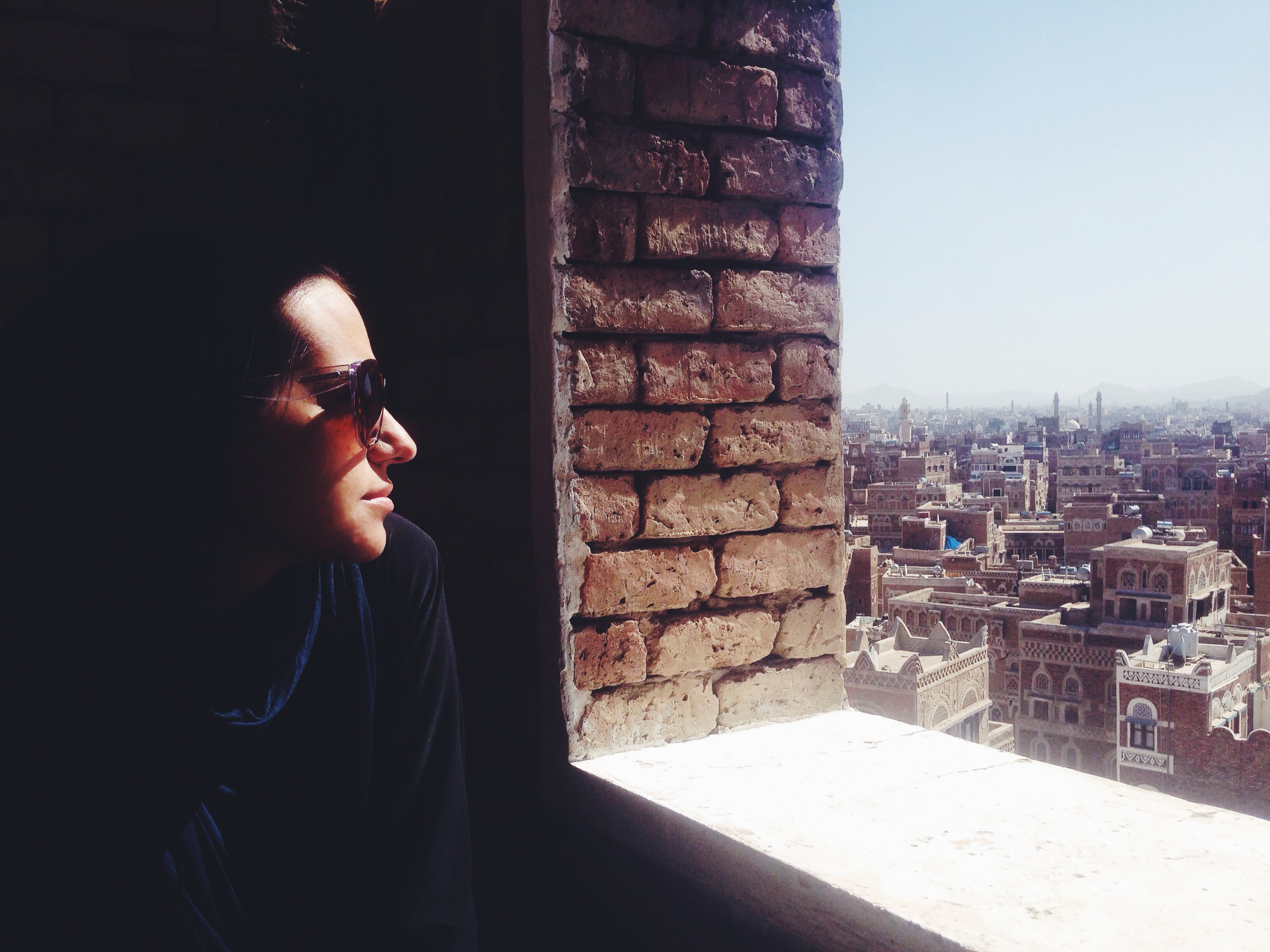 In her award-winning film on the rising opposition movement in Saudi Arabia, Safa Al Ahmad films an activist relating how he had narrowly escaped arrest from the police by jumping 20 feet from his bedroom window.

It’s a silent and powerful form of resistance that Al Ahmad knows all too well. She is a freelance journalist and documentary filmmaker who has produced several documentaries on uprisings in the Middle East, most notably in Saudi Arabia and Yemen. Her 2014 documentary for the BBC about a largely unreported mass uprising in Saudi Arabia’s Eastern Province was instrumental in bringing international attention to the large-scale violence meted out to peaceful demonstrators. In making the film Saudi’s Secret Uprising, Al Ahmad was able to gain unprecedented access to activists and bring their story to the world.

Covered in her long, black abaya and matching headscarf, she can often be spotted quietly trailing through the bustling streets and desolate alleyways of Sanaa or Qatif, shoulder bag slung across her body and camera in hand.

Every meeting with a source is fraught with risk. If it’s not Al Qaeda, it’s a clandestine group of armed activists being hunted down by one of the world’s most ruthless regimes. Saudi Arabia and Yemen are inarguably among the most dangerous countries in the world for journalists. Locals and foreigners, especially journalists and activists, are commonly subject to kidnappings, arrests, hasty convictions, torture and brutal punishments including public beheadings. Even the slightest anti-government utterance in public against the ruling Al Saud family can result in sudden disappearance followed by an impromptu “court hearing” that results in a crucifixion sentence.

Al Ahmad is candid when speaking about the deep challenges of reporting in Saudi Arabia and Yemen—but not in the way that many in the West would expect. Being a woman has never been an issue for her. “The challenge of being a female journalist in the Middle East is a tired and clichéd question and I think misses the point,” she says. “Journalism in the Middle East is challenging regardless of gender. Dictatorships are a real challenge regardless of whether you’re a man or a woman. If you are against them, they will silence you.”

She continues, “We do people a disservice by constantly focusing on the gender issue. I’ve never heard a man be asked, ‘Was it difficult for you as a man to cover the Middle East?’ I’ve done documentaries with Al Qaeda and with different militias, [and] I have the same access as everyone who is male.”

In fact, being a female reporter often works to Al Ahmad’s advantage. “I get access to females who are not willing to speak to men—and I get full access to the men as well.”

Besides, she adds, the challenge of being a woman is universal regardless of your profession. “I actually feel safer in the Middle East. When I was in Yemen, I never feared for my life as a woman. When I went to visit my family in California just after coming out of Yemen, I was physically harassed getting out of the subway. I wanted to laugh out loud because it was almost funny.”

Al Ahmad’s films go above and beyond the typical narrative of life in Yemen and Saudi Arabia. Western audiences are generally aware, for example, that religion is deeply entrenched in Saudi society, but the degree of religiosity varies from province to province, profoundly affecting how people live, she points out. “Religion plays a huge role in the minutiae of everyday life, and understanding that is integral even if someone doesn’t necessarily see themselves as religious and conservative. The educational system is steeped in it,” she says, adding that she was schooled in five separate subjects related to religion. “We all know how [ideologically] different America is from the east to the west coast, but for some reason when it comes to Saudi Arabia it’s seen as homogeneous—as if all Saudis think the same way. It’s not like that at all.”

And while heavy government censorship plays a key role in contributing to this narrow mindset, equally at fault are the Western journalists who Al Ahmad says “stick to certain narratives…as if there are no real people there.”

“It’s all about either terrorism or the royal family,” she says. “There’s very little in between…and that does a disservice [both] for the people abroad who are trying to understand what Saudi Arabia is about and [for] Saudi people themselves because there is so little journalism inside the country.”

Al Ahmad’s determination to bring new clarity and understanding to Saudi Arabia is what drives her to continue filming, despite the threats of violence issued against her, the persistent warnings not to return to Saudi Arabia after the release of Saudi’s Secret Uprising, and the online abuse—including the creation of a deceitful hashtag: #SafaAlAhmadSupportsTerrorism. Her supporters have countered with their own hashtag, #ThankyouSafaAlAhmad, but the repeated threats have still prevented her from returning to Saudi Arabia since the film’s release.

For Al Ahmad, producing her films is worth the backlash and risks, but it didn’t initially seem to be. “When I started doing journalism, I deliberately avoided doing stories on Saudi Arabia,” she admits. “I went to the West Bank, I lived in Palestine and I went to Afghanistan. I was trying to understand what was going on around me, and I did not want to be pigeonholed as a Saudi journalist. I also knew the consequences of actually doing Saudi stories inside Saudi Arabia, so I avoided it for the longest time.”
She attributes her change of attitude to the inspirational activists she met during the Arab Spring protests and uprisings that swept across the region in 2011. “It really made me feel ashamed of myself. All these people had the courage to come out and literally risk their lives to try to tell a story—not just for the local journalists on the ground but as activists who were actively trying to change things that we had all been complaining about for years.”

This is not to say that her films have been unequivocally endorsed by activists. Her decision to include exclusive footage of several allegedly unarmed activists shooting at Saudi police officers provoked an outcry among the opposition. “The challenge was not to show what was happening in the region as black and white, as purely peaceful activists against the violence of the state,” she says. “There were a lot of shades in between that needed to be talked about honestly if we were going to truly reflect all that was happening on the ground.”

Al Ahmad’s first documentary on Yemen, Al Qaeda in Yemen, aired on PBS in 2012. While working on her second documentary on the country, The Fight for Yemen, she was one of the few journalistsreporting to international news organizations from the ground during the escalation between Houthi rebels, militant groups and the government. In early 2015, she was able to negotiate access to Houthi rebels as they advanced in the country. She also faced threats in her quest to achieve a balanced report; Houthi militiamen detained her for four hours after she attempted to interview a caretaker of a mosque whose imam had recently been ejected. The politician who housed her while she was working in Sanaa, Dr. Mohamed Abdulmalik al Mutawakil, was also assassinated during her stay there.

“When you work on these things, you can’t be naïve about how close you are to death or how close everyone around you is to death,” Al Ahmad says on the killing of al Mutawakil, a political figure and activist she describes as having “a beautiful perspective on life.”

Sometimes it is tragic events like this that bring humanity to the story, she adds. “In a way it gives more depth to your understanding and responsibility as a filmmaker. When you go back to the edit [suite], you’re so removed from the environment and you think of every word in the script, every picture you shot, every line in every frame. I think that responsibility to show the humanity stays with you much more when you’ve [experienced] something this intense on the ground.”

When told she’s been selected for CJFE’s 2015 International Press Freedom Award, Al Ahmad smiles and says awards like these are important because they recognize how valuable it is to break barriers and reach people beyond the English-speaking world. “To me, freedom of expression is the ability to truly speak your mind and express yourself without self-censorship or government censorship. I work in different languages and so I have different audiences that are truly global. For me, the ability to cross those boundaries with different channels and different experiences is part of that freedom of expression.”

Shenaz Kermalli (@mskermalli) is a Toronto-based journalist who specializes in Middle Eastern issues.