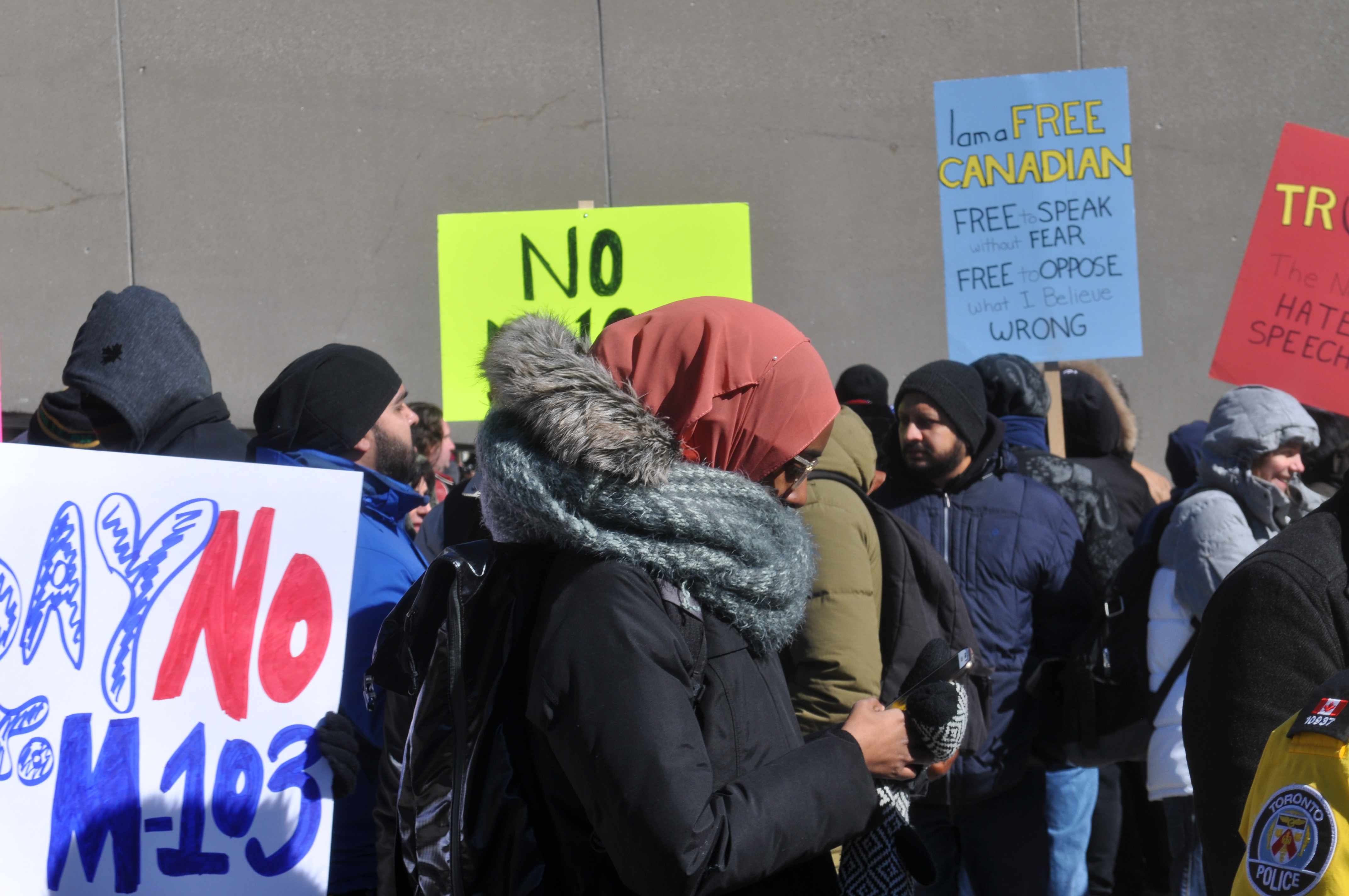 M-103 is a heartfelt call to combat systemic racism which became controversial in the aftermath of the horrifying shooting in a Quebec City mosque, which was perpetrated by a white supremacist. The motion is generating controversy as a result of two specific calls to action: (1) “to publicly condemn all forms of racism and religious discrimination” and (2) “to initiate a whole of government approach to reducing or eliminating systemic racism and religious discrimination, including Islamophobia”. The motion also calls for general data collection on hate crime incidences and a committee report on steps to address systemic racism within 240 days.

Canadian Journalists for Free Expression (CJFE) shares an opinion which has already been expressed in part by our allies at the Canadian Civil Liberties Association (CCLA). We believe that Motion 103 in its current form presents no inherent risk to free expression and, as such, is not a free expression issue. Claims that M-103 will prohibit religiously motivated critiques of Islam are simply false. M-103 instead expresses support for a systemic response from the Canadian government to discrimination vulnerable groups may face in their private lives, employment or while accessing public services.

M-103 is not an attempt to restrict freedom of expression. Hate crime laws and specific remedies are already defined in law, including hate propaganda provisions within the Criminal Code, and M-103 enacts no changes in law. The controversy around M-103 is not an expression of righteous resistance to the overreaches of the state, but rather a clear exploitation of an important and empathetic gesture by reactionary groups. These groups seek to bolster their political capital by using free expression as a banner-cause while targeting the Canadian Islamic community.

A quick audit of M-103 opposition shows that opposing the motion has become a default position for candidates in the federal Conservative Party leadership race. However, reviewing the platforms and history of provincial and federal conservative groups and candidates reveals that the claim from opponents that this opposition is motivated by a desire to defend free expression is disingenuous. Their opposition of M-103 is inconsistent with previous stances which have been demonstrably offside from the cause of free expression.

1. Bill C-51: The Anti-terrorism Act, 2015 (formerly Bill C-51) explicitly imposes specific legislative controls on free expression, including promotion of terrorism and promotion of threats to the security of Canada. The Conservative-sponsored legislation was approved in the House with full support from members in the Liberal caucus, who have since pledged to amend the law.

2. Anti-Semitism Motion: Similar to M-103, a February 2015 motion was tabled by Liberal MP Irwin Cotler calling for a federal strategy to combat anti-Semitic acts and to affirm that hatred directed toward the Jewish community was an affront to shared democratic values.

3. Boycotts as 'Hate Propaganda': In May 2015, the office of then-Minister for Public Safety, Steven Blaney, condemned support for the Boycott, Divestment and Sanctions (BDS) movement, a campaign that threatens boycotts to elicit political concessions from Israel, and intimated that supporting BDS could be prosecuted as a hate crime. When this stance was published in a CBC report, Blaney’s office dismissed it as a “conspiracy theory,” but many involved in BDS advocacy read it as an explicit threat by the Ministry for Public Safety to criminalize their expression.

4. Condemning BDS: A February 2016 motion condemning the BDS movement was tabled and adopted by the Liberal government with Conservative support, and only two dissenting Liberal votes.

5. BDS Blacklists: In May 2016, Bill 202 was tabled in Ontario while Premier Kathleen Wynne was visiting Israel. The legislation called on the provincial government to blacklist any group, organization or individual from receiving provincial money or contracts if those groups supported or advocated for BDS. The Progressive Conservatives lent their overt support to the legislation, which was summarily killed by the Liberals on second reading.

6. Jail for Supporting Pipeline Opponents: In Fall 2016, Dr. Kellie Leitch launched a website as part of her Conservative federal leadership bid presenting her platform for regulating environmental protests. “Proposals include increasing penalties for those engaging in acts of violence and/or vandalism designed to disrupt natural resource development, […] ensuring that those who provide support for the aforementioned actions are charged, […and] classifying environmental lobbying as a political activity to ensure transparency in funding and to get international money out of the process.” The ambiguous use of the word 'support' implies the criminalization of advocating for, writing about or providing media coverage to disruptive activities. Reclassifying environmental lobbying is a direct affront to free expression, advocacy and dissent. (Concerns about CRA audits of environmental non-profits have been the subject of CJFE advocacy in the past.)

It is CJFE's position that for M-103's opponents there is a double-standard at play and a selective partisan indifference to legislation and parliamentary discourse which present verifiable threats to free expression. It is alarming that this partisanship is disguising itself with claims of supporting "free expression". In essence this approach is co-opting the cause of furthering and enriching civil discourse for an expressly political purpose.

M-103 is explicitly not legislation that bans, criminalizes or places any kind of administrative disincentive on specific forms of expression. It is correct, however, to describe M-103 as an indication that the government would prefer these views not be expressed.

In supporting M-103, the government is not criminalizing Islamophobia but is formally taking the position that it finds Islamophobia disagreeable. Given the climate of hate which has intensified over the last six months, especially since M-103’s introduction, this is an eminently defensible position. We thank the Mississauga-Erin Mills MP for her contribution to civil discourse by tabling the motion. Philosophical opposition to Islamophobia and indeed all forms of hatred and racism are fine and just positions for the government to take. The operative word in civil society is “civil.” These views ought to be condemned—by the state and by Canadians of good conscience who see living in a pluralistic, diverse and welcoming country as true Canadian values.

This position of civil moderation was well articulated in a statement published by Michael Chong, the lone dissenting voice in the federal Conservative leadership race. Chong references the recent mosque killings as an example of the need for serious study of anti-Muslim and anti-Islamic prejudice in Canada. He also states, as we do, that M-103 is not a free expression issue. It changes no laws and creates no enforceable remedy for limitations on speech.

M-103 seeks to voice governmental concern about a very legitimate social problem. If there is any chilling of speech happening in this discourse, it is the voices of moderate Canadians now afraid to speak out in the face of hateful and divisive rhetoric.

As evidenced above, there are glaring inconsistencies with past policies and positions the parties and individuals involved in the debate have espoused. This suggests that opposition to M-103 has more to do with political opportunism and selective outrage than it does with any sort of practical desire to defend and uphold the constitutionally protected rights of Canadians to free expression.

Kevin Metcalf is CJFE’s Promotions and Communications Coordinator. In his spare time, he volunteers as Operations Coordinator for Stop C-51: Toronto and as a community organizer helping to monitor the rise of far-right and extremist groups in Canada.
Editor's Note: The second paragraph of this piece originally stated that the motion was "brought forward in the aftermath of the horrifying shooting in a Quebec City". M-103 was actually tabled on December 5, 2016.
Do you like this post?
Tweet
Free Expression: Canada Bill C-51 type-blog_entry Free Expression & The Law Canada