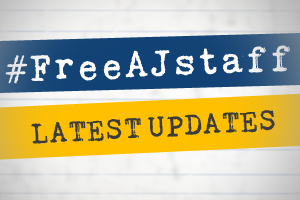 By Alexandra Zakreski Mohamed Fahmy, Peter Greste and Baher Mohamed appeared in a Cairo court for the eighth time today. The court appearance was marked by a series of disturbing developments, beginning with the revelation from Fahmy’s lawyer, Khaled Abubakr, that prosecutors have impeded his work, demanding that the defense pay “1.2 million pounds ($168,704 USD) to get copies of the evidence” against their clients. Following that, three defense lawyers representing Peter Greste and Baher Mohamed abruptly quit the case and stormed out of the courtroom, accusing the Al Jazeera network of caring more about tarnishing Egypt’s reputation than freeing the detained journalists. The lead defense lawyer, Farag Fathy argued “what I understand from [Al Jazeera’s] approach is they don’t care if their employees, or staff, are acquitted but they want to continue with this lawsuit so Egypt looks bad internationally.” Fathy has previously spoken out about the Qatari network’s $150 million USD lawsuit against Egypt, launched earlier this month, expressing concern that it would damage his clients’ case. Al Jazeera rejected Fathy’s comments, saying that the company is “continuing to do everything possible to get our journalists out of jail and are working with a first class legal team to end this injustice.” Al Jazeera is suing Egypt for breaching an investment contract that has allowed the network to operate freely in the country since 1999. Neither Greste nor Mohamed were aware of their lawyers’ intentions to quit, and Fahmy was equally distressed, shouting to journalists in the press gallery that “what the lawyers did makes us look bad! We are very angry with the way this is unfolding!” CJFE is deeply concerned that this latest development could have a negative impact on the trial of these three journalists.* It is important to emphasize that Mohamed Fahmy, Peter Greste and Baher Mohamed are veteran professional journalists who were operating in Egypt without a political agenda, and continue to advocate only for their own freedom. CJFE is monitoring the situation closely and will post further updates as more information becomes available. Bail for Fahmy, Greste and Mohamed was once again denied and the trial was adjourned to May 22, 2014. Meanwhile, numerous human rights groups have voiced concern and condemnation over the continued detention of Al Jazeera Arabic journalist Abdullah al-Shami. He has been held without charge since August 14, 2013 and has been on a hunger strike for over a hundred days in protest of his detention. It has been reported that he has lost close to a third of his body weight, and a doctor has stated that he is in danger of “[dying] within a few days.” Al-Shami is currently being held in solitary confinement as punishment for his hunger strike. Keep track of developments in the trial and detention of Al Jazeera English journalists in Egypt with our #FreeAJStaff: Timeline. *Correction: This article originally stated "It is also distressing that two of the three journalists on trial are now without legal representation." The article was modified after receiving confirmation from Al Jazeera that there are two lawyers who continue to represent all three journalists currently on trial.
Alexandra Zakreski is CJFE's International Programs Assistant.
Do you like this post?
Tweet
Free Expression: International Threats and Attacks Egypt #FreeAJstaff type-blog_entry