A history of violence: The lasting legacy of impunity in the Philippines 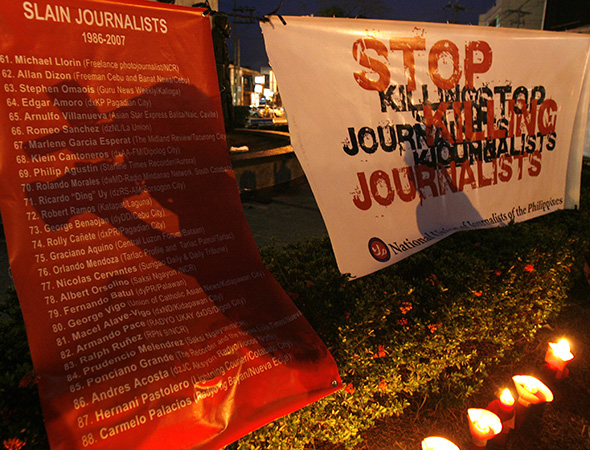 A cameraman's shadow is reflected on a poster of names of journalists who were slain in Philippines, during a prayer rally in commemoration of World Press Freedom Day in Manila
PHOTO: REUTERS/Romeo Ranoco

By Miles Kenyon According to Carlos Conde, there’s a popular phrase among journalists in the Philippines: “You’re free to say whatever you want; what happens next is the problem.” Conde, a former journalist and current researcher on the Philippines for Human Rights Watch’s Asia division, is speaking about a well-known paradox: the country may have one of the largest media communities in the area but it also carries a legacy of violence and impunity for its many journalists. “We have a very, very rich history of a mass media that values its freedom,” says Conde. However, that all changed when Ferdinand Marcos took the seat of power as the country’s dictator in 1965. For more than 20 years, Marcos sought to silence dissenters, many of whom were members of the media. “It took Marcos decades to instill [this fear of authority] in the Philippines and journalists were also intimidated and silenced by this,” Conde says. Whether through martial law or more outwardly corrupt means, Conde says Marcos and his cronies could easily control the press. “All they had to do is use their goons. They could threaten, intimidate or kill [journalists].” After the People’s Revolution in 1986 saw the ousting of Marcos, there began to be incremental change and some journalists came out of the shadows. These freedoms, however, came up against the dire consequences of a rigid political status quo. “We have a newborn mass media,” Conde explains, “but the political landscape remains essentially the same. It remains violent.” This muzzling of the press is recognizable even on an international scale. According to the Committee to Protect Journalists’ (CPJ) 2013 report, the Philippines ranks third in the world for impunity. This means that there are only two countries where the death of a journalist is less likely to lead to a conviction: Iraq and Somalia. According to CPJ, of the 76 Filipino journalists that have been killed in the country since 1992, 66 have been murdered with impunity. While potentially shocking to a Canadian audience, these numbers don’t generally grab headlines in the Philippines. “Some newspapers and online news sites reported [CPJ’s 2013 impunity report], but the public response to the news was mostly indifference,” writes Paul Dawnson Formaran of the Centre for Media Freedom and Responsibility. “It was not much of a shock that the Philippines ranked higher than countries like Russia and Afghanistan.” A source for this apathy can be found in one key event: the Maguindanao massacre. On November 23, 2009, a convoy of 58 people was traveling to file the papers that would allow Esmael Mangudadatu to run for governorship of the province, against Andal Ampatuan Jr., son of the incumbent. While en route however, Mangudadatu’s entire convoy was pulled over, dragged to a nearby hilltop and executed. The victims included Mangudadatu’s wife, his two sisters and 32 media workers. According to CPJ, the massacre is the “single deadliest event for the press since 1992, when CPJ began keeping detailed records on journalist deaths.” To date, 105 suspects have been arrested, 90 remain at large and not one conviction has been handed down. Ampatuan, a notorious clan leader in the area, is widely suspected to be behind the brutal killings and since the trial proceedings began in 2010 three witnesses linked to the case have been murdered. According to a report by the New York Times, the latest witness, Esmail Amil Enog, “...was mutilated and dismembered before being killed.” While particularly heinous, the Maguindanao massacre is hardly an exception: in 2013, the Centre for Media Freedom and Responsibility reported that 10 journalists and media workers were killed in relation to their work. Aside from outright murders, there are also more subtle forms of oppression for journalists. Libel, for instance, is a criminal offence in the Philippines that can see reporters spend years behind bars. Most recently, Alexander Adonis, a radio journalist, served two years for reporting on the alleged extramarital activities of a congressman. Despite all of this however, members of the media are persistent in their reporting. When asked about the most positive change for freedom of expression in the Philippines, Formaran points to recent rulings by the country’s Supreme Court regarding the Maguindanao massacre. Five new guidelines, believed to speed up the case, have been handed down. “It’s a positive move in the context of government apathy to the killing of journalists,” Formaran writes. But until justice is served for the 66 journalists murdered with impunity, this apathy and oppression of freedom of expression will reign.

Miles Kenyon is a radio and digital journalist based in Toronto.