After the attack on Charlie Hebdo, governments clamp down on free speech 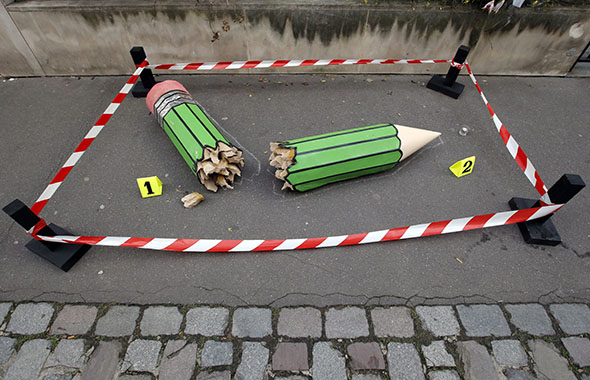 An anonymous art installation showing a broken pencil is displayed on the pavement near the Charlie Hebdo office in Paris, Tuesday, Jan. 20, 2015. PHOTO: AP/Francois Mori

On January 7, 2015, two gunmen stormed the offices of French satirical newspaper Charlie Hebdo and killed 12 people, the majority of whom were staff and contributors to the weekly.

The assailants, who claimed allegiance to Al Qaeda in the Arabian Peninsula and ISIS, justified their massacre as due vengeance for Charlie Hebdo’s repeated publication of cartoons depicting the Prophet Muhammad; many Muslims believe that it is strictly forbidden to create visual representations of the Prophet.

In the days and weeks after this heinous attack, world leaders rallied under the banner of “Je suis Charlie,” as they expressed solidarity with the French people and, ostensibly, the principles of free expression. However, in the following months, as international attention and collective defiance waned, there was a more disturbing trend of governments around the world attempting to clamp down on these same tenets of free speech under the all too familiar guise of guaranteeing national security.

In the interactive storymap below you will find the international spread of government attempts to limit free speech in the wake of the Charlie Hebdo attack. In light of its magnitude, it appears definitively that Nous ne sommes pas tous Charlie.