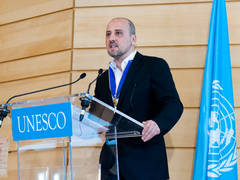 By Alexandra Zakreski CJFE congratulates its nominee Ahmet Şık on being awarded the 2014 UNESCO Guillermo Cano World Press Freedom Prize, which he accepted at UNESCO headquarters in Paris on Friday, May 2 in advance of World Press Freedom Day. Şık was also the recipient of a 2013 CJFE International Press Freedom Award. Despite Şık’s international renown as a journalist, he continues to be persecuted by Turkish authorities for his exposure of corruption in the government and judiciary, as well as human rights violations. Şık has been charged with defamation twice: once in 2012 for making a statement upon his release from prison in which he expressed his wish for those persecuting him to be brought to justice, and again in 2013 for comments he made allegedly calling police officers “fascist” at a September 11, 2013 demonstration dedicated to deceased Gezi Park protester Ahmet Atakan. While Şık was acquitted of both defamation charges, he continues to be prosecuted through what is known as the Odatv case, under which he is charged with the vague offences of “aiding an armed terrorist organization” and “inciting hatred and hostility.” Şık spent one year in pre-trial detention under these anti-terrorism laws after the publication of his exposé on the Gülen movement and its links to the Turkish security apparatus, titled The Imam’s Army. By now, it has become clear that the main evidence for these charges was both fabricated and planted by Turkish police in an attempt to silence Şık’s reporting on corruption in the judiciary and government. Şık is one of 14 journalists and writers who have been embroiled in this highly politicized case, something that he made sure to highlight when he accepted his award from UNESCO on May 2, saying “there is no doubt that there are many colleagues, both in Turkey and in other countries, who deserve it more than I do. Some of them lost their lives; some of them lost their freedom. So you are giving this Prize to all my friends as well.” 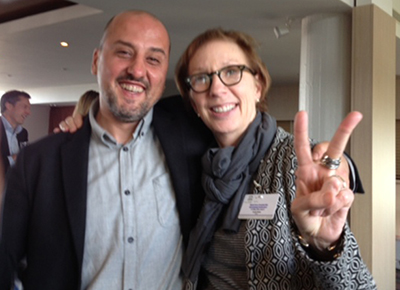 This is the second year in a row that Turkey has been ranked by the Committee to Protect Journalists (CPJ) as the world’s worst jailer of journalists. The trial of Ahmet Şık and his colleagues on clearly trumped up charges drags on in the midst of a battle for political influence between Prime Minister Recep Tayyip Erdogan and exiled cleric Fethullah Gülen. Meanwhile, Şık faces a potential 15-year prison term if convicted. In the wake of Ahmet Şık’s latest international accolade, CJFE calls on the Turkish government to drop the spurious charges against Şık and his fellow defendants in the Odatv case, in addition to releasing all prisoners of conscience in Turkey. Alexandra Zakreski is CJFE's International Programs Assistant.
Do you like this post?
Tweet
Turkey Censorship Defamation and Libel Threats and Attacks Free Expression: International Award winners International Press Freedom Award type-blog_entry Free Expression and the Law