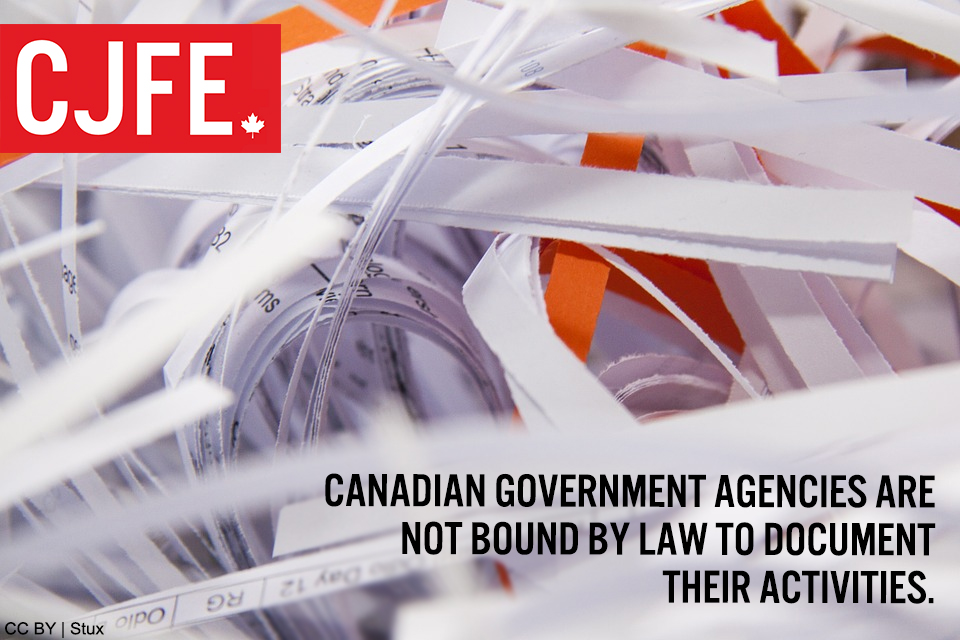 On May 5, 2015, Alberta’s then-Progressive Conservative government was roundly defeated by Rachel Notley and the NDP in the provincial election, bringing a dramatic end to 44 years of conservative rule in the province.

The following day, 344 boxes of documents from the Alberta Environment and Sustainable Resource Department (ESRD) were destroyed by the department’s staff “improperly and without any supervision,” a report by Alberta’s privacy and public interest commissioners concluded.

The investigation into the destruction of ESRD documents began after witnesses saw several bags of shredded documents sitting in the hallway of the Alberta legislature after the election. Greg Clark, leader of the Alberta Party, first brought attention to the issue on May 13, 2015, prompting the launch of a formal investigation.

While the final report from the investigation is careful to note that commissioners found no evidence that ESRD staff had been directed to shred the documents or that the destruction was intended to avoid freedom of information requests, it does detail the scope of the information that was lost in the shredding:

“Records created and received by the offices [of the deputy minister and minister of the department], based on the descriptions in the inventories provided, included working papers, meeting notes, correspondence, day files, and action requests relating to litigation, committees, legislation, cabinet, outside organizations, other governments, committees and Aboriginal communities.”

Ultimately, Alberta’s Information and Privacy Commissioner Jill Clayton found that destruction of documents had occurred but that no individual could be held accountable for the shredding since there was no proof that the persons responsible intended to break the law. This finding was compounded by the report’s conclusion that the rules surrounding the destruction of documents under the previous government were confusing and inconsistent. Danielle Larivee, Minister of Municipal Affairs and Service Alberta, said that the rules relating to documentation under the Progressive Conservatives were “a mess.” Alberta Party leader Greg Clark also avoided pinning blame for the shredding on government employees, saying that “the political staff from the outgoing government bears a lot of responsibility here.”

Clark, who has called for a second investigation into the incident, also noted that “rules were broken, but there’s no consequence for breaking those rules. Number one, we need consequences for breaking rules.”

The scandal, dubbed Shred-Gate by the national media, comes at a time of increased public scrutiny over federal and provincial handling of access to information requests, the storage and management of government information and concerns about personal privacy and institutional transparency in Canada.

In the meantime, Treasury Board President Scott Brison recently waived all fees for ATI requests beyond the $5.00 application fee and implemented a directive for staff to provide records in the format preferred by the requester, including modern, machine-readable and reusable formats. Information and privacy commissioners from every Canadian province and territory, along with the federal information commissioner, have also come together to propose new legislation that would codify the duty to document by public institutions.

CJFE applauds these encouraging steps but notes that because the full review of the ATI Act isn’t scheduled to begin until 2018, Canadian government agencies and departments are still not bound by law to document their activities and decisions. Token measures that give the appearance of progress in these important areas are simply not enough; more needs to be done to improve government accountability and transparency now.

The actions of the outgoing provincial government in the Alberta Shred-Gate case may not have been illegal, but they were certainly a demonstration of questionable judgment at best. At worst, whoever gave the order to destroy government documents was making an effort to hide what was happening at the ESRD.