All Quiet on the Science Front 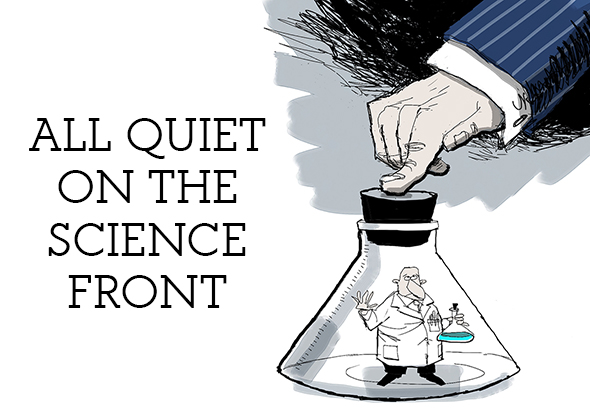 Decision makers need information to help them make decisions. And those decisions can be best evaluated when all the facts are in. But who supplies “the facts,” and how can we trust that they are unbiased?

Objectivity is the cornerstone of scientific investigation. Scientists seek answers to how the world works by conducting experiments, making observations and careful measurements without any “agenda.” When we publish our research, it is vetted by our peers, who review it critically to determine if they could reach the same conclusions based on our approach and analysis. It’s even becoming more and more common for scientists to make their data and analysis freely availableallowing anyone to examine it and see if they can draw the same conclusions.

It would seem that this objectivity matters to Canadians when it comes to making decisions. In a recent “National Survey on Energy Literacy,” Alberta Oil magazine reported that more than 50 per cent of those surveyed trusted the academic community to provide “credible and trustworthy information” about topics on oil sands development, clean energy in Canada and carbon emissions. Less than 20 per cent of respondents said they would trust either the federal or provincial government to provide “credible and trustworthy information” on these same issues.

While the academic community is larger than just scientists, all academics are subject to the scrutiny of their peers. It’s that scrutiny that helps advance our knowledge; through debate, we can see the flaws in our understanding, and the research questions change direction as required. The goal is truth, not pushing forward an ideology.

Even though there’s a lack of trust in government, there are still credible and trustworthy people in government departments—the scientists. The scientists who work in government are subject to the same scrutiny as those in academia; they publish in academic journals, sit on graduate committees and supervise graduate students in academic departments across the country. They are objective scientists, just like their peers working at universities. They possess the same level of credibility. So why are government scientists trusted to provide “credible and trustworthy information” to their peers, but not to the general public? Too often we hear about government scientists being denied permission to speak to media about their research—Kristi Miller and Max Bothwell are two prominent examples.

Miller, a researcher at Fisheries and Oceans Canada, was barred from speaking to the press about her findings that a virus may have contributed to the decline of B.C. salmon in 2009. The prominent journal Science published her groundbreaking study in January 2011. Despite media interest in her work, the Privy Council Office (PCO) turned down interview requests. According to documents obtained by Postmedia News under the Access to Information Act, the PCO also vetoed a press release about the study, stating that it “was not very good, focused on salmon dying and not on the new science aspect.”

Bothwell, also a scientist at Environment Canada, is an expert on the pervasive algae didymo. In May 2014, after the journal BioScience published an article that Bothwell co-authored, a Canadian Press reporter asked for an interview with him—and that’s when 16 public affairs people from different government agencies got involved, sending more than 110 pages of emails about getting approved responses for the questions. In the end, the interview did not happen. According to media reports, Bothwell’s study may have been considered politically sensitive because it links didymo growth to global climate change factors.

These issues around limiting communication are systemic and well ingrained in the public service. In October 2014, the Professional Institute of the Public Service of Canada reported that 90 per cent of federal scientists feel they cannot speak freely about their work, and nearly as many (86 per cent) fear reprimand for doing so. This fear further serves the suppression of communication to the public through self-censorship; why try to promote your work when you think doing so will hinder your career?

Trust in academics comes from the perception of providing information without bias. But even more so than academics, government scientists are keenly aware of ensuring their work is presented in a bias-free fashion. While academics may emphasize the perceived importance of their scientific work to some particular policy issue, as public servants, government scientists cannot because the science they do is only part of the formation of policy. Whether the science supports a given policy or doesn’t, neither the work nor the scientist who conducted it can be seen as having a particular “angle.” This would call into question how that science is evaluated by the decision makers.

Given this keen need for careful consideration, you would think that government departments would be quick to promote government science and the work of its scientists. You’d also think that they would provide the funding necessary to investigate pressing issues, and help ensure that work is conducted in a timely fashion to provide the information as it’s needed, rather than cut internationally renowned programs. It seems obvious that promoting the work of government scientists, and allowing them to become part of the public conversation, would promote the role of objective government-led science in providing Canadians with “credible and trustworthy information.”

Instead, the opposite seems very much the case, in my experience. Simple tasks like hiring summer students or travelling to a conference require form after form. These, in turn, must be approved by managers, then directors, then deputy ministers, far up the bureaucratic chain of command. It’s unreasonable and illogical. Internal research funds are limited and/or highly directed, and seeking external funding becomes more challenging with every additional level of internal approval required. Perhaps most important, and in spite of the growing mountain of paperwork and approvals that seems to directly counteract one’s ability to dedicate time to actually conducting science, excellent, top-calibre work is published by Canadian government scientists every day. However, this work goes largely unpromoted by the very departments that employ them, it is frequently left without comment by the scientists who conducted the studies, and all too often, it remains unnoticed by Canadians.

The Canadian public values credible and trustworthy information, and it doesn’t currently believe that our governments are in a position to provide it. A critical means of restoring the public’s trust in government is to provide more transparency into how decisions are made and how various pieces of information are weighed in the decision-making process. Some departments have mechanisms to do exactly this (e.g., the Canadian Science Advice Secretariat within Fisheries and Oceans Canada). But transparency and accessibility in the eyes of the public are just as important in helping to restore that trust. Denying government scientists the ability to comment on their own work only makes it look like there’s something to hide, and it suggests that there is neither trust in the scientists who conducted the study to speak objectively, nor in the public to hear what the study has to say from the person most qualified to discuss it.

Having a well-informed public is a critical component to a functioning democracy, as a society of decision makers. To consider that the public does not trust its own government as a credible source of information should be of great concern to everyone. Any relationship counsellor will tell you that trust is a two-way street. Maybe if the Canadian government showed some trust in its scientists, that might help restore the public’s trust in the government.

Michael Rennie (@not_klaatu) is an assistant professor at Lakehead University. He was a research scientist with Fisheries and Oceans Canada in the Central and Arctic Region from 2010 to 2014.

This piece originally appeared in CJFE's 2014-15 Review of Free Expression in Canada.