Are war crimes going unreported? Journalists threatened from all sides in Yemen 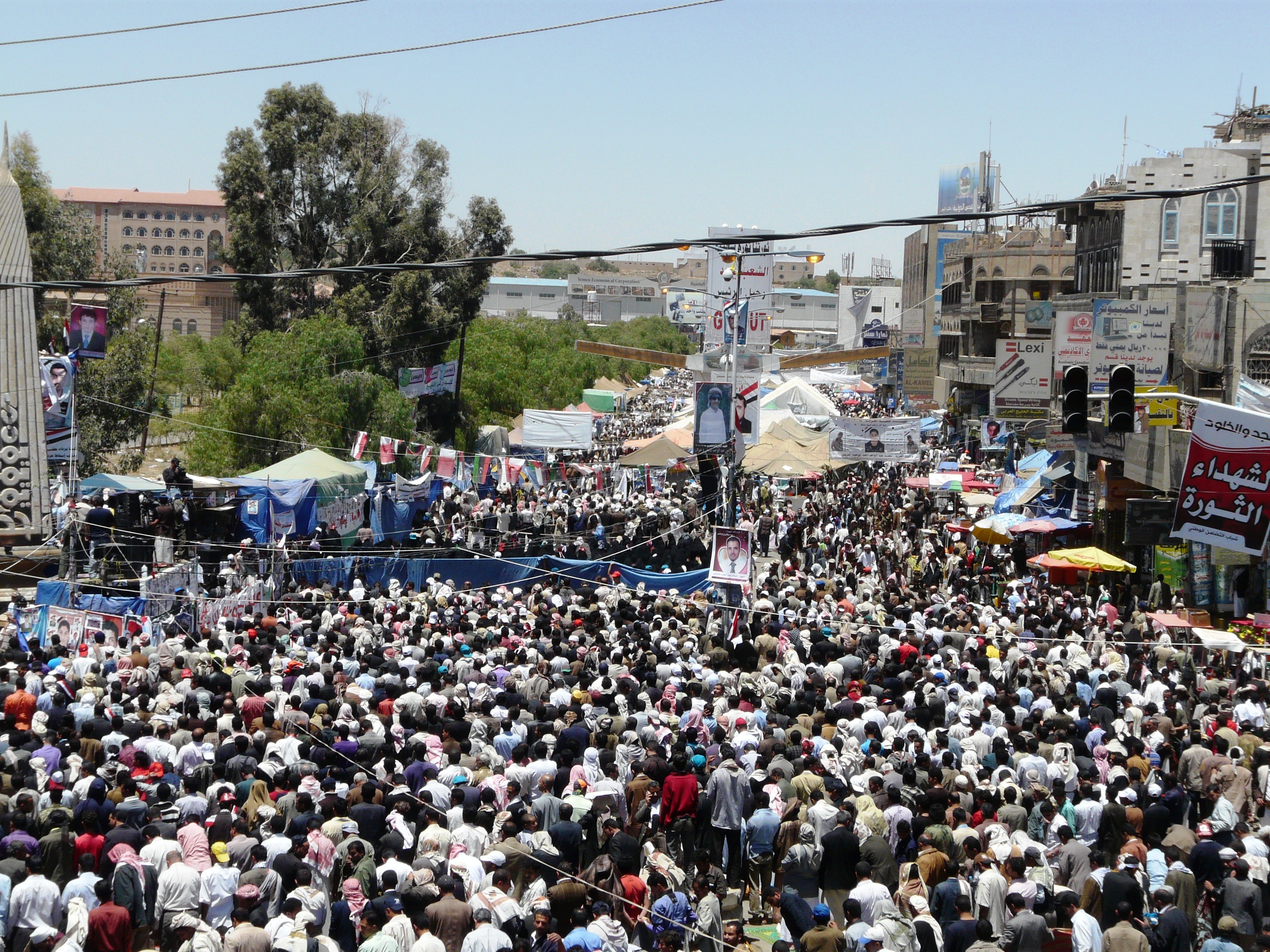 Protesters in Sana'a on April 4, 2011, during the early stages of the Yemeni Revolution. PHOTO: Email4mobile. CC BY-SA 3.0

While international media outlets are focused on Syria’s devastating civil war, another humanitarian catastrophe is underway as Yemen’s year-and-a-half long war continues. Amidst the chaos, war crimes are likely being committed as airstrikes hit schools, wedding parties, mosques and hospitals, claiming the lives of thousands of civilians and receiving nothing like appropriate levels of media coverage.

Statistics from earlier this year show that more than 5,600 people have reportedly been killed in the war to date, with over 26,000 injured and over 150,000 forced to flee the country.

Most local journalists have fled Yemen’s capital city of Sana’a as dangers mount for those unwilling to parrot the propaganda of Houthi forces, who now control the city. With foreign journalists banned from entering the country, international media workers are forced to report on the conflict from the Saudi Arabian border. According to Al Jazeera Arabic journalist Asem Al Ghamdi, reporting from the Saudi border severely narrows what can be covered. Meanwhile, media workers remaining in Yemen struggle to report on the conflict while dealing with continuous harassment from the Iran-backed Houthi militants. And like all civilians in the country, they face the constant threat of airstrikes from the Saudi-led coalition.

At least a dozen journalists have been targeted and killed since the war began in March 2015, and over 55 media workers have been arrested, kidnapped or prosecuted. Most recently, Yemeni journalist and Mareb Press correspondent Abdullah Azizan was killed while working in the Bayhan area. According to the Yemeni Journalists’ Syndicate, Azizan is the fourth media worker to die in the country this year. Also killed this year are Almigdad Mojalli, Yemeni journalist for The Telegraph, who died when his car was hit by an airstrike travelling from Jarif; Yemen TV journalists Muneer Alhakami and his partner Suaad Hujaira, who also died in airstrikes; and Al-Masirah TV cameraman, Hashim Al-Hamran, who died after suffering serious injuries following an airstrike in the town of Dahyan.

“Journalism in Yemen these days usually rhymes with danger,” said Jason Stern, MENA senior research associate at the Committee to Protect Journalists (CPJ). “If you’re dead, your story is dead, too.”

The deliberate attacks on media workers are eradicating freedom of information rights, which are even more vital to protect during Yemen’s political upheaval. The corresponding lack of press freedom and access to information is further undermining Yemen’s stability, as both local and international communities are unable to remain up to date about events on the ground and the country’s political crisis. The absence of these voices is detrimental to all, but for individuals in the country, this information could be crucial to their daily safety during the war.

The Saudi coalition was established to target Houthi militants after they seized control of Yemen’s main government buildings in January 2015 and forced President Abd-Rabbu Mansour Hadi into exile. Yemen’s coast is home to one of the world’s busiest oil shipping lanes, which is geopolitically important to Saudi Arabia as the largest exporter of petroleum liquids in the world. The coalition’s members are Saudi Arabia, Bahrain, Egypt, Iraq, Jordan, Kuwait, Lebanon, Oman and Qatar, with the United States and United Kingdom providing weapons, intelligence and the construction of a centre to coordinate with Saudi operations.

According to Human Rights Watch, many of the coalition attacks “appeared to be in violation of international humanitarian law, or the laws of war.”

In addition to the coalition destruction, a number of other groups are also contributing to the country’s disorder, including Al-Qaeda in the Arabian Peninsula, the Houthis, ISIS, and forces loyal to former Yemeni President Ali Abdullah Saleh.

With so many parties vying for power, and journalists being targeted from every side of the conflict, press freedom is virtually non-existent for local media workers in Yemen—and there is no end to the danger in sight. Without accurate reporting on the crisis, it is impossible in the short-term for the international community to understand the situation developing on the ground, and in the long-term to hold anyone responsible for war crimes committed in the country.

Violet Rusu is a volunteer for CJFE and a freelance human rights journalist based in Toronto. Follow her on Twitter @RusuViolet.