At least 100 journalists and media workers killed in 2014 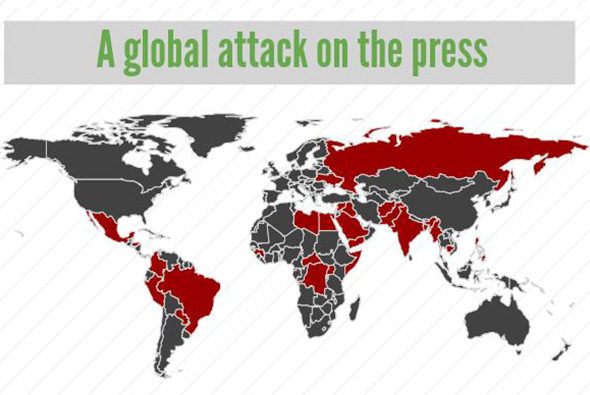 By Alexandra Zakreski and Laura Tribe

While a new year often symbolizes a fresh start, this year has begun by shining a dramatic spotlight on the horrifying repercussions that many journalists face for their work. 2015 has begun with tragedy, as nine journalists from the satirical weekly Charlie Hebdo were brutally murdered in Paris on January 7. Of particular concern is that this tragic attack is but one of many cases where media workers have been targeted for their work. Threats and attacks on the press are becoming an increasingly common way to silence dissenting voices, and intimidate others from speaking out. Last year was one of the most dangerous years for journalists that CJFE has seen, as at least 100 journalists and media workers lost their lives in the course of their work. While journalists have long fallen victim to violence in conflict zones and faced violent threats for reporting on sensitive issues such as crime, corruption and politics, 2014 saw an uptake in a disturbing practice: the explicit targeting of journalists as a means to gain power, incite fear, and build publicity.

A global attack on press freedom

Among others, the murders of James Foley and Steven Sotloff showcased the ultimate sacrifice that many journalists pay for their work. In addition to the tragic loss of life, this kind of gruesome and high profile violence creates a culture of fear, increasing the potential for self-censorship and contributing to information vacuums in regions where accurate reporting is scarce. CJFE has reported on these issues throughout the year, as we examined the insecurity that results in the use of journalists as hostages, and attacks on the press in countries including Syria, Afghanistan, and Ukraine. As we prepare ourselves for the year ahead, please join us in honouring and remembering the lives of those we lost in 2014.

Journalists killed in 2014 from canadaCJFE

A deadly year for press freedom

The infographic below highlights some of the relevant facts and statistics about attacks on the press in 2014. Alexandra Zakreski is CJFE’s International Programs Coordinator. Laura Tribe is CJFE’s National and Digital Programs Lead.
Afghanistan Iraq Mexico Pakistan Palestine Syria Ukraine Threats and Attacks Free Expression: International type-feature type-blog_entry
Do you like this page?
Tweet