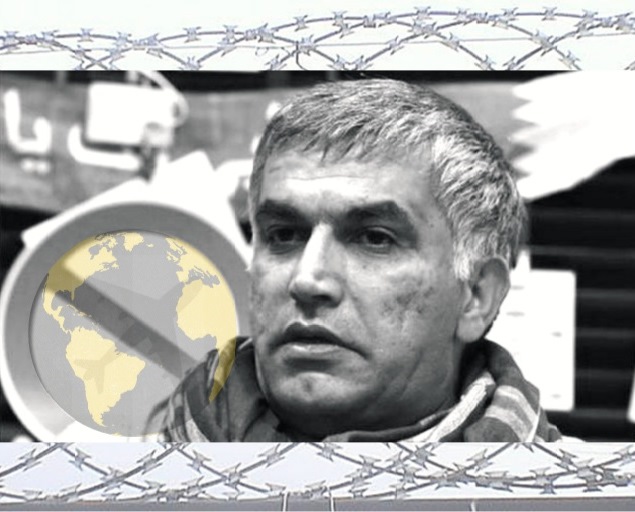 We, the undersigned NGOs, call on the Bahraini authorities to lift the arbitrary travel ban on human rights defender Nabeel Rajab in order that he be able to travel abroad with his family for the purpose of securing medical assistance for his wife, Sumaya Rajab.

A public prosecutor imposed the travel ban on Nabeel Rajab without any judicial determination on July 13 2015, the day that Your Majesty pardoned him and ordered his release following his conviction for “publicly insulting official institutions” by criticizing the government on social media. The travel ban is related to two other speech-related charges that led to his arrest on April 2 2015, charges which prosecutors have not dropped.

The first outstanding charge is for allegedly “insulting a statutory body”, under article 216 of Bahrain’s Penal Code, based on his social media comments about the alleged torture of detainees in Jaw Prison in March 2015. The second accuses him of “disseminating false rumours in times of war,” under article 133 of the Penal Code, based on social media posts criticizing Saudi Arabia-led coalition air strikes in Yemen. Violations of articles 133 and 216 carry maximum sentences of 10 and three years in prison, respectively. Neither of the alleged acts upon which these charges are based were in any way recognisable criminal offences under international human rights law, and both involved the peaceful exercise of internationally protected rights to freedom of expression and to promote and protect human rights.

In November 2015, Sumaya Rajab was diagnosed with medical conditions requiring urgent and highly specialized treatment according to the medical expert team monitoring her condition. She was told that this treatment is not available in Bahrain.

In December 2015, Nabeel Rajab’s lawyers submitted their fourth appeal against the travel ban – they have submitted two requests to the attorney general, one request to the investigating prosecutor and one request to the Public Prosecution Office - requesting that it be lifted so he could accompany his wife. The Bahraini authorities have not responded to these appeals and the travel ban remains in place.

In November 2015, 81 Members of the European Parliament called on Your Majesty to lift Nabeel Rajab’s travel ban. The European Parliament passed a resolution in July 2015, shortly prior to Nabeel Rajab’s pardon, calling for his immediate and unconditional release alongside other prisoners of conscience. The same month, 44 members of the UK Parliament called on the government of Bahrain to drop Nabeel Rajab’s current charges and to release all political prisoners and those imprisoned for exercising their right to freedom of expression. After his release, three UN human rights experts – Michael Forst, David Kaye, and Maina Kiai – called for Nabeel Rajab’s charges to be dropped. This followed the UN High Commissioner for Human Rights, Prince Zeid Ra’ad Zeid Al-Hussein, call for the release of all those detained in relation to their peaceful activities in Bahrain in June.

We, the undersigned, therefore call on the Bahraini authorities to:

Americans for Democracy and Human Rights in Bahrain (ADHRB)

FIDH, within the framework of the Observatory for the Protection of Human Rights Defenders

No Peace Without Justice

Salam for Democracy and Human Rights

World Organisation Against Torture (OMCT), within the framework of the Observatory for the Protection of Human Rights Defenders