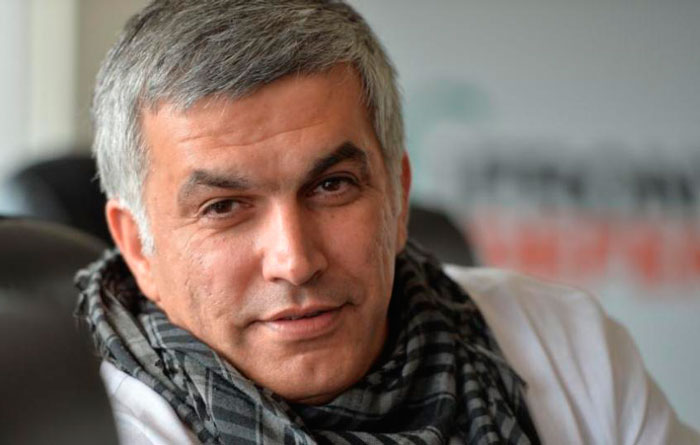 Tomorrow, July 12, 2016, the latest trial of prominent human rights defender Nabeel Rajab begins. Facing charges related to comments made on Twitter, Rajab may be sentenced to more than ten years in prison. We, the undersigned NGOs, hold the government of Bahrain responsible for the deterioration of Rajab’s health due to poor detention conditions. We call on the Bahraini authorities to immediately and unconditionally release Rajab, and to drop all charges against him.

In the early hours of the morning on June 13, 2016, Rajab was arrested withno declared reason. He was not informed of his charges until the following day, when he was brought before the public prosecution and officially charged with "spreading false news and rumors about the internal situation in a bid to discredit Bahrain." He was then remanded to seven days in custody pending investigation. This charge was in response to statements he gave during past television interviews in early 2015 and 2016.

On June 28, 2016, Rajab was transferred to the Bahrain Defense Hospital’s Coronary Care Unit for an irregular heartbeat. His family was informed that he is also suffering from high blood pressure, a condition for which he was treated two years ago. Despite his weak condition, he was hastily transported from the Coronary Unit back to jail the following day.

Since the arrest, Rajab has been detained in extremely poor conditions in solitary confinement. His cell is filthy, the toilet and shower are unclean and unhygienic, and there is little to no clean water in the bathroom. These conditions have been detrimental to Rajab’s health; he has lost eight kilograms in just two weeks. Blood tests have shown that he has acquired both a urinary tract infection and low mononucleosis, and he is awaiting the results of additional screenings. Rajab also needs surgery to treat gallstones and an enlarged gallbladder. In addition, he is suffering from an enlarged prostate and needs to be seen by a hematologist. These surgeries will not be scheduled before August.

On June 26, 2016, the authorities notified Rajab that his first court hearing for another case would be held on July 12, 2016. This separate case is related to other tweets and retweets about Jau Prison and the war in Yemen, which were posted in 2015. He may face up to 13 years in prison if found guilty and the authorities have ordered that Rajab remain in detention until his hearing.

We remind the Bahraini government of its obligation to preserve the right to free expression under Article 19 of the International Covenant on Civil and Political Rights, to which Bahrain acceded in 2006. We call for action to be taken to guarantee and protect the health of human rights defender Nabeel Rajab from further deterioration. We reiterate repeated calls by United Nations officials and others in the international community to immediately release Rajab.

Read more about Nabeel Rajab.
Stay updated about the case.