Behind the veneer: The struggle for free expression in Turkey 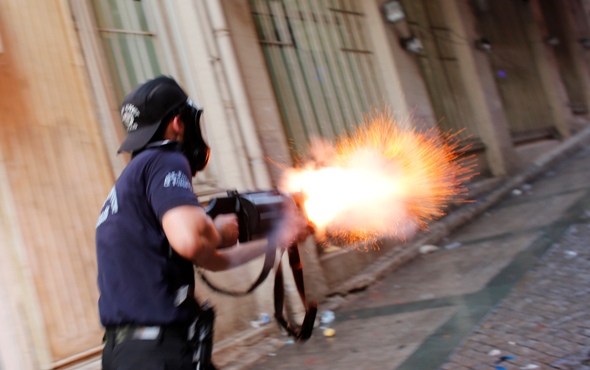 Freedom of expression in Turkey is shaped and challenged by struggles on multiple fronts. Journalists and media workers often face retribution for their stories from the Turkish government. Such penalties can manifest themselves in the form of terrorism charges, long term prison sentences, and draconian laws defining absurd media offences. The recent protests earlier this year, centered on the government’s plans to demolish Istanbul’s Taksim Gezi Park, brought international attention to the deep and messy layers of repression imposed upon freedom of speech, thought and media in Turkish society.

The protests to defend Gezi Park went beyond anger at the proposed removal of one of the last green spaces in Istanbul. The subject of the protests quickly expanded to include the rights to freedom of assembly and expression when police attempted to brutally suppress demonstrations. Indeed, the denial of collective input and public involvement in shaping the future is at stake in Turkey.

Rather than the anger, frustration and hope of thousands of demonstrators, television channels aired programming such as soap operas, cooking shows and penguins. The media silence surrounding the protests perhaps reveals a very close and toxic relationship between certain mainstream media outlets and the Turkish state, one that has made some professional journalists wary to speak out for fear of serious state-administered reprisal.

As in many countries around the world, the attack on press freedoms in Turkey is both ideological and physical in nature. The lack of open and honest reporting on the Gezi Park in state-run media emphasized the government’s desire to control public messaging, while the unabashed use of force against journalists and citizens trying to cover the protests was a grave reminder of the normalization of police violence. Statements by organizations such as CJFE and Reporters Without Borders (RSF) have called for the punishment of police forces who should be protecting reporters on the job, rather than harming and obstructing them.

One does not have to attend public demonstrations to face prosecution in Turkey. The notorious Ergenekon trials highlight the ways in which Turkish journalists face serious and long-term challenges to their professional and personal freedoms. The ruling Justice and Development Party (AKP) and its associates have used the trials as a legal witch hunt, administering astonishingly heavy sentences to journalists accused of terrorism and conspiracy against the state, especially if their work involved covering the proceedings.

The ease with which authoritarian measures are used against journalists is alarming, making Turkey one of the least free countries for the press in Europe. At the moment, more journalists are incarcerated in Turkey than in China – a country with a reputation for extreme media censorship and heavy penalties for those journalists, writers and citizen bloggers that even remotely challenge the state. This year Turkey dropped six positions to rank 154 out of 179 countries on RSF’s 2013 World Press Freedom Index. The report has labelled Turkey as the ‘world’s biggest prison for journalists.’ According to PEN International, Turkey holds one-tenth of all jailed journalists in the world.

The international community’s condemnation and a plethora of statistics and negative index ratings have done little to improve the rights of Turkish media workers. The judicial reforms that took place earlier this year in Turkey did not include any meaningful changes for press freedoms, and left journalists as vulnerable as ever to prosecution on arbitrary grounds. The AKP government had pledged to undertake reforms with the aim of bringing the law in line with international standards. However, the changes remain superficial and limited.Amnesty International has called for the abolition of vague, easily abused, and therefore dangerous penal codes that allow journalists and ordinary citizens to be charged for ‘insulting religious values’, engaging in the ‘denigration of the Turkish nation,’ and so on.

Despite, and in fact because of this climate of repression, alternative and oppositional voices have been creative in conveying their struggles and learning about one another’s demands and experiences through unmediated electronic platforms. Hundreds of thousands of activists within Turkey took to social media to protest the planned demolition of Gezi Park, plan meetings, publicize demonstrations, freely spread information and discuss alternatives. In short, social media were used to organize and build a movement of local resistance.

In addition, smaller-scale initiatives to reclaim public space and use social media to spread the call to action, as in the case of the ‘rainbow’ steps, point towards the continued growth of free and open discourse in an environment where formal and mainstream press is less and less accessible to the Turkish public. Social media has provided a space for organization and discussion around points of contention that have become publicly taboo and legally punishable in Turkey – namely Kurdish nationhood and reclamation of a peaceful and thriving existence for Turkey’s long-persecuted Kurdish community. The use of Facebook and Twitter bya young activist to publicize a widespread Kurdish hunger strike across Turkish prisons ended up generating a huge following and launching an online space to talk about the path to freedom for Kurds, as well as for other marginalized identities whose voices are formally excluded from the mainstream Turkish media.

The presence of an active and diverse community of social media users, be they journalists, citizen activists, or bloggers, signifies a real threat to the ruling order and indicates the repression of the independent press in Turkey. Indeed, the use of oppositional social media has prompted the AKP government to create a 6,000 member strong social media team composed mainly of young recruits to disseminate ‘positive’ and pro-government messages. This surely points to the success of the hard work of journalists and activists who have used social media to bypass state mechanisms of press censorship.

The challenges to press freedom in Turkey are undoubtedly manifold and complex. However, alternative journalism and social media have proven their resilience in a climate of serious political and legal coercion. The reality is that there is a diverse and colourful media scene, which has all the talent, creativity and critical abilities to engage across the social spectrum and challenge the hegemony of the state. The hope is that journalists, media workers and progressive Turkish groups and individuals continue to build dialogue, challenge the criminalization of their colleagues and work to restore journalism to its rightful place as an ardent representative of civil society.

Sara Jaffri is a writer and researcher based in Toronto.