Bill C-51, Freedom of Assembly and Canadians’ Ability to Protest 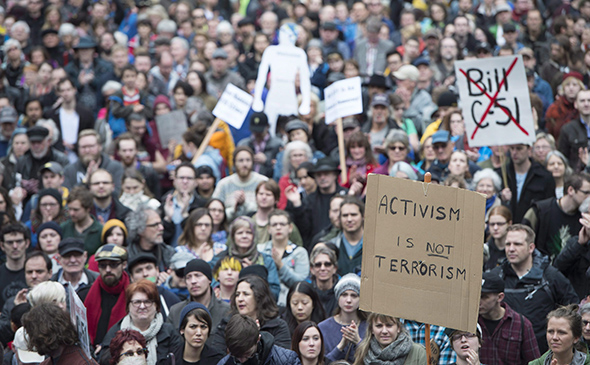 Demonstrators attend a protest on a national day of action against Bill C-51 outside the Vancouver Art Gallery in downtown Vancouver, Saturday, March 14, 2015. PHOTO: CP/Jonathan Hayward

In addition to myriad concerns, the new law will violate Canadians’ ability to protest, which is an essential part of any democracy. Protests increase public awareness of an issue and place pressure on governments and lawmakers to enact policies and laws that are in the best interest of all citizens.

As we pass the fifth anniversary of June 2010’s G20 summit and protests in Toronto, Canadians’ freedom of assembly rights are under threat from new legislation like Bill C-51.

Bill C-51 is a piece of anti-terror legislation introduced by the Conservative government that has recently passed into law. Critics of the new law argue that it violates the rights and freedoms of Canadians as protected in the Canadian Charter of Rights and Freedoms. It expands police power to act against suspected terrorist actions, including the ability to arrest without a warrant anyone they suspect may engage in or promote terrorist offences, and increased sharing of your personal information among government offices. The bill will also have implications on our rights to protest and freedom of assembly.

Which rights are currently protected?

The Canadian Charter of Rights and Freedoms guarantees to all Canadians freedom of peaceful assembly and freedom of expression.

How will Bill C-51 affect these rights?

Exactly how Bill C-51 will affect the freedoms of peaceful assembly and expression is not made explicitly clear within the bill itself. While the government has protected lawful advocacy, there is other language within the bill that suggests activist groups and protesters could be targeted for their actions.

Within Bill C-51, the definition of what constitutes a threat to national security is broad and non-specific, making it difficult to understand how protesting in particular is affected. Any activities that undermine the security of Canada, including interfering with the economic or financial stability of Canada, are offences under Bill C-51.

This definition allows for a broad interpretation of what constitutes a threat to national security: a protest calling for action on missing and murdered Indigenous women that blocks a highway, or an environmental protest that fails to secure the proper permits, could warrant widespread arrests. A

Additionally, up until now, police have required evidence that a person will carry out a terrorist act for an arrest to take place. Under Bill C-51, police now have the power to arrest a person without a warrant based on suspicion that they might carry out an act of terrorism. This increased power lowers the threshold for what actions could have you arrested.

Police in Canada also have a history of arbitrarily arresting citizens participating in peaceful protests. During the G20 summit in Toronto in June 2010, the largest mass arrest in Canadian history took place, with 1,100 people arrested over the course of the protests. The protests were largely peaceful with the exception of a small number of protesters who broke away to vandalize buildings and set fire to police cruisers.

The police arrested and detained protesters, members of the media, human rights observers and bystanders who had not been involved in the violent protests. With Bill C-51 now law, the police have the legal right to detain protesters that they believe are likely to inspire acts of terrorism or threaten national security under broad definitions of the terms.

How could this affect you?

Rights to freedom of expression and freedom of assembly, along with the ability of citizens to protest their government, are essential to any functioning democracy. The Canadian government has the ability to decide which individuals or groups will be targeted for further scrutiny, with increased powers under Bill C-51 to silence them. This has led to some concern over whether the government will target organizations whose views do not match up with the Conservatives.

Some organizations such as Greenpeace—which has previously been under government surveillance—are concerned that the new law will take aim at Aboriginal and environmental activists groups in particular. The RCMP has already said they believe the anti-petroleum movement is a growing threat to national security. These groups are justifiably concerned that Bill C-51 will be used as an excuse to spy on protesters and others who vocally express views that counter government stances.

With the newly expanded mandate of CSIS and the increased sharing powers between government departments with information about persons deemed threats to national security, Canadian citizens who take part in protests that are deemed “unlawful”—a term that could include not securing the appropriate noise by-law exemption for loud megaphone use after 7pm—are at risk of being placed under surveillance or arrested by their government under an anti-terrorism law.

PROTECT YOUR RIGHTS: WHAT YOU CAN DO

Alexandra Theodorakidis is a former CJFE intern and current freelance journalist based in Toronto. Follow her on Twitter @AlexandraTheo.

Free Expression: Canada Freedom of Assembly Bill C-51 type-feature type-blog_entry Free Expression and the Law
Do you like this page?
Tweet