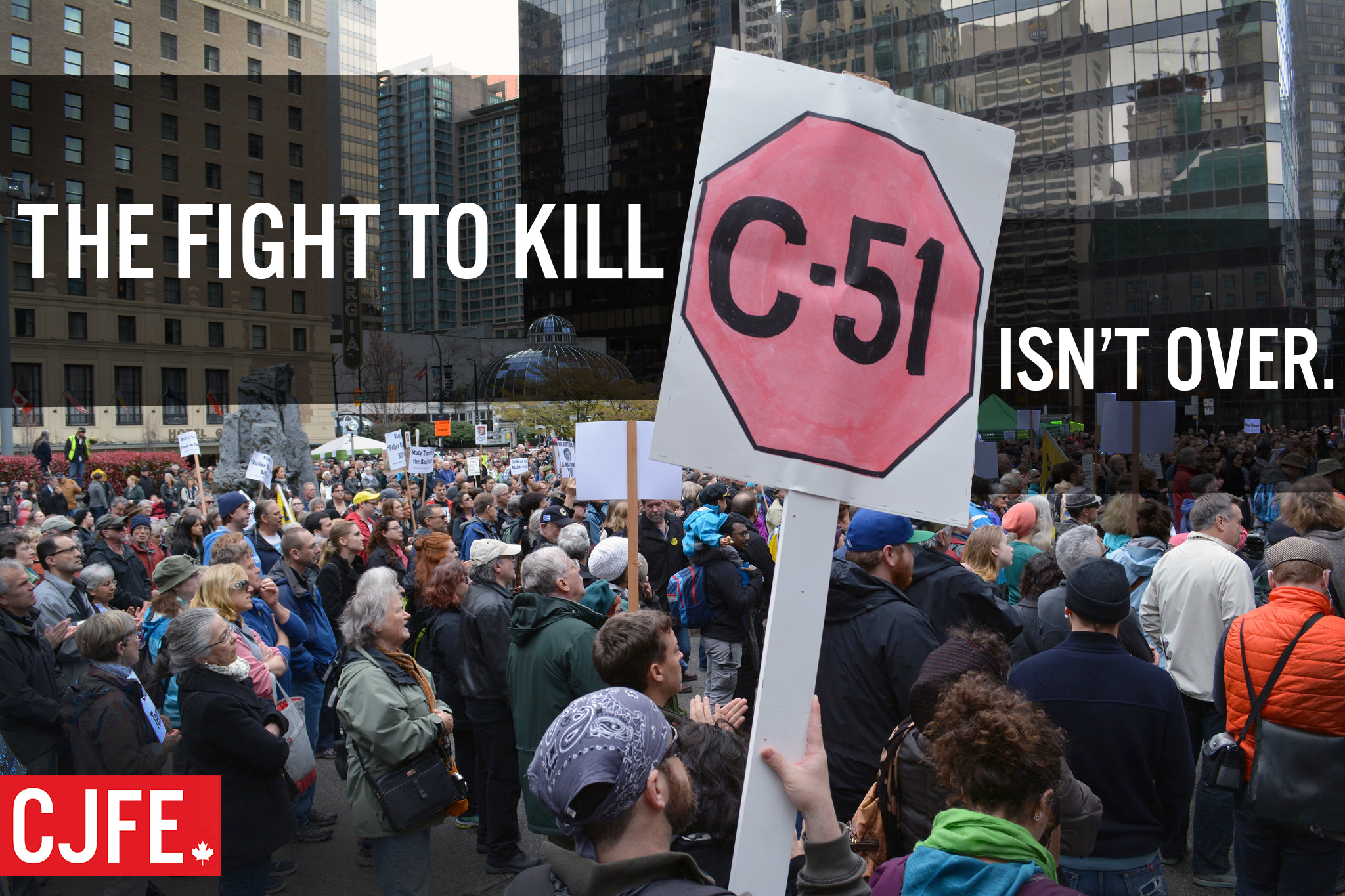 One year ago, you helped us put #C51ontrial to defend free expression, privacy, due process and our constitutional rights. The battle to kill Bill C-51 isn’t over.

July 21st marks the one-year anniversary of the Charter challenge filed by CJFE and the Canadian Civil Liberties Association (CCLA) on the grounds that five sections of Bill C-51, the Anti-terrorism Act, 2015, violate the Canadian Charter of Rights and Freedoms. The lawsuit is currently in court pending a response from the government. But this dangerous legislation is doing damage every second we have to wait for action, and we are tired of waiting. Bill C-51 jeopardizes our most basic rights and liberties.

Nothing has changed since over 300,000 Canadians called for a full repeal, marched in the streets and made their voices heard to speak out against this legislation. Stephen Harper may be gone but Bill C-51 is still the law of the land.

Prime Minister Justin Trudeau has promised to amend the bill to remove the “problematic elements”, but nothing has been done yet. CJFE is meeting with Ministers and MPs to actively engage for real reform that will protect our constitutional rights, but voices within the security services are relentlessly working behind the scenes to water down any changes. They’re betting that Canadians have forgotten about this issue.

We know they’re wrong. That’s why it is critical that Canadians let the Prime Minister know that they will not tolerate more delays and half-measures.

So, what can you do?

There have been C-51 petitions before. You’ve probably signed some already. This one is different. Unlike the others, this is an official Parliamentary e-petition, a new system that allows citizens to digitally participate in the federal policy process. It is eligible to be presented in the House of Commons, and the government will be required to respond.

Petition e-308, sponsored by MP Arif Virani, calls upon the government to fully commit to a review of Bill C-51 and remove the aspects that violate Canadian Charter rights.  The petition needs 500 signatures to be presented in the House Of Commons.

We think we can blow that number out of the water, don’t you?

Tell your friends to join you on Twitter and Facebook, and let @JustinTrudeau know that you still care about your rights.

Support this campaign, CJFE’s direct work with the government on Bill C-51 and the rest of CJFE’s important work.

You haven’t stood by silently, and neither have we.

Since the day Bill C-51 was announced, CJFE and civil society groups across Canada have relentlessly fought this dangerous, irresponsible piece of legislation. Read about how we’ve advocated, educated and litigated to kill this unjust legislation on our Bill C-51 campaign page.

Bill C-51 has been Canadian law forCount Up

Canadians' rights are being violated every second that Bill C-51 remains in place.