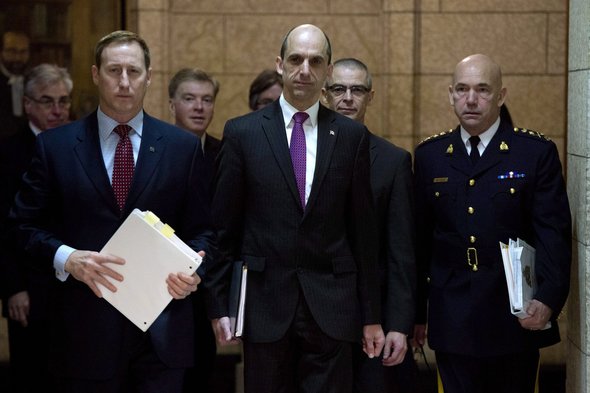 By Peter Jacobsen and Andrew MacDonald

On April 17, 1982, the rights and freedoms essential to a "free and democratic society" were entrenched into Canada's Constitution by the proclamation of the Charter of Rights and Freedoms by Queen Elizabeth II, at a ceremony on Parliament Hill. Much of the time, most of us are able to take these guarantees for granted -- we are fortunate to be able to do so.

But Bill C-51, dubbed the Anti-Terrorism Act, 2015, should cause Canadians deep concern. Its provisions, if passed into law, would jeopardize many of our most basic rights and liberties and would only serve to undermine the health of our democracy. On the 33rd anniversary of the signing of the Charter, we should demand that Parliament scrap Bill C-51 altogether.

The guarantees of the Charter are not absolute. The Charter itself is clear on this point. However, any limits imposed by Parliament on our basic rights and fundamental freedoms must be "reasonable"; they must not be overly broad; and they must be "demonstrably justified in a free and democratic society."

As many commentators have pointed out, Bill C-51 fails on all of these counts. Below, we highlight some of the most troubling aspects of the proposed legislation.

The proposed new Criminal Code offence of "promoting terrorism" is vastly overbroad and would capture innocent speech made for innocent purposes, including private conversations. In prohibiting the perceived promotion of "terrorism offences in general," its scope goes well beyond that of the already-existing, terrorism-related offences -- including the prohibition on counselling someone to commit a terrorist attack -- and would unduly and unnecessarily limit Canadians' freedom of expression and ability to engage in proper democratic debate.

Similarly, in proposing to amend existing provisions that allow for preventive arrest and detention, Bill C-51 is unreasonable and dangerous. The new law would not only allow police to detain people for seven days as opposed to the current three days, it would do so based only on the peace officer's suspicion that a terrorist activity may be carried out and that the arrest is likely to prevent it. The current Criminal Code standard requires the police officer to show a judge that there are reasonable grounds to believe that a terrorist activity will be carried out and that the arrest is necessary to prevent it. The proposed amendments grant far too much latitude and discretion to law enforcement and are contrary to Charter values and the rule of law.

As has been pointed out by privacy commissioners and advocates across the country, Bill C-51 would also allow and direct a large number of government departments and agencies to share individuals' private information without any of the oversight necessary to ensure that this power is not abused. Granting bureaucrats this unfettered power to share confidential information without any oversight will almost inevitably result in an overuse and abuse of this power.

Finally, Bill C-51 would increase the powers of CSIS in ways that are ill-defined and contrary to a basic understanding of what constitutes a "free and democratic society." Instead of being confined to its role in gathering intelligence -- the mandate for which it was created in 1984 -- under the new law, CSIS would be authorized to "take measures" to reduce a perceived "threat to the security of Canada." We take no comfort in the fact that Bill C-51 would constrain CSIS from intentionally causing death or violating sexual integrity. This proposed expansion of powers is especially concerning because the legislation would do nothing to bolster oversight mechanisms that are already clearly insufficient.

Further, if CSIS believed that it needed to "take measures" that would contravene any Charter guarantee, Bill C-51 would allow a judge to authorize, in advance, that infringement in a hearing held in secret. This fundamentally misunderstands the role of judges in our democratic system and the nature of constitutionally-entrenched rights. A judge's role is to prevent Charter infringements and to adjudicate alleged breaches by another branch of government in open court, not to authorize them behind closed doors.

Proponents of Bill C-51 claim that terrorists want to attack Canada and Canadians because they hate our society and its values. The solution Bill C-51 offers is not more effective protections against terrorists, but an unnecessary and dangerous dilution of the rights and freedoms essential to a free and democratic society -- the very values terrorists are said to hate.

Canadian society and its values require that security laws respect the individual liberty, dignity and privacy the Charter is aimed at protecting. Bill C-51 does not meet this test.