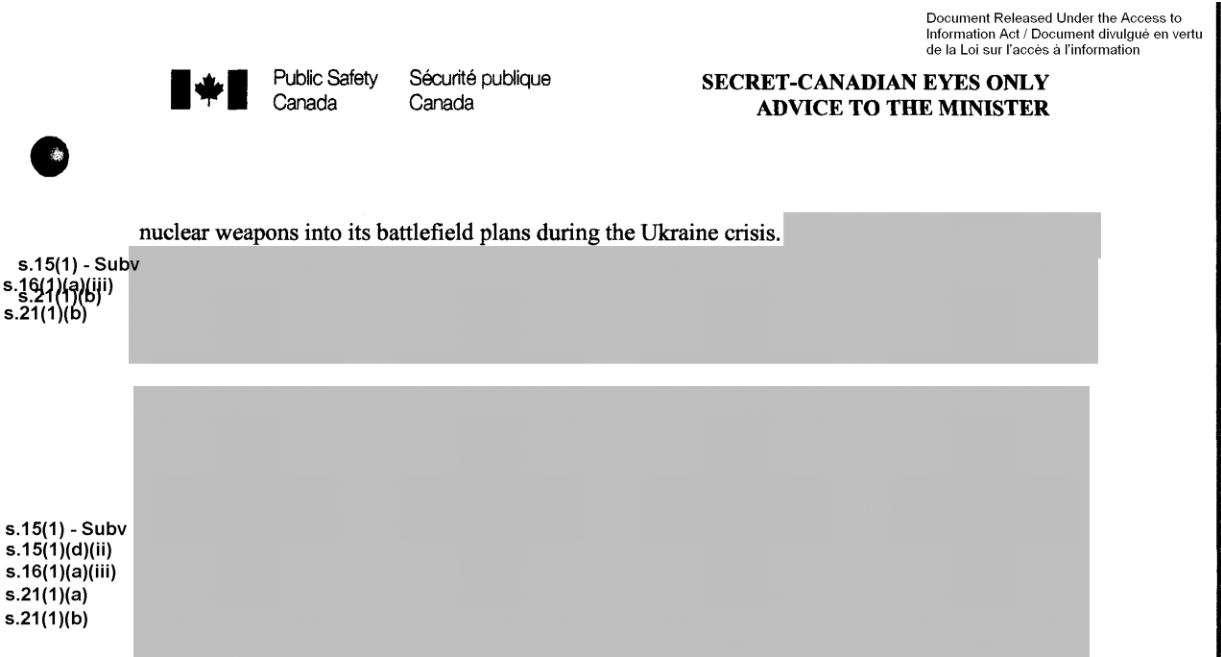 A heavily redacted document from Public Safety Canada, retrieved through the Access to Information request system.

The federal government’s proposed changes to the Access to Information Act are being criticized by most of the people who use the system to ferret out information from Ottawa’s bureaucracy.

Criticism of the changes centres on:

Day-to-day users of the ATI system should see little change and very little new information coming their way. The changes are cosmetic, for the most part, but they could get more help from the Information Commissioner if they have a dispute over unreleased information.

Help us fight for your right to government information: donate to CJFE today

The legislation appears to be directed at people that the government believes use ATI without focus or in bad faith, people who send bureaucrats on long fishing expeditions in search of information—amateur sleuths whose requests are vague and would require vast amount of time.

The word “vexatious” is the most contentious term in the bill. In law, vexatious litigants are persistent, annoying and engaged in spiteful causes. How will bureaucrats determine the frame of mind of ATI users, and do public servants have the right to be free of annoyance?

In 2014, when Prime Minster Trudeau was leader of what was then the third party in the House of Commons, he introduced a bill that would have flipped the onus of disclosure. Federal departments and agencies would have had to go to court to show why they would not release information. There is an echo of this promise in the new bill. If a person objects to a refusal for information, the government must prove to the Information Commissioner that the material should remain secret. The old system forces the Information Commissioner to make an application to the Federal Court. (The same 2014 bill would have opened up the secretive and powerful Board of Internal Economy, which effectively sets spending policy for the House of Commons, including expenses for MPs. This, too, has been abandoned.)

Journalists and others using the system can still expect to get pages of redacted documents. There were no changes to the vague rules that create exemptions allowing bureaucrats to withhold documents or cut them to the bone. They will, however, need to give written reasons for withholding information, although it’s not clear whether they need much detail.

In his 2015 election platform, Trudeau said,

"Government data and information should be open by default, in formats that are modern and easy to use. We will update the Access to Information Act to meet this standard. We will make it easier for Canadians to access information by eliminating all fees, except for the initial $5 filing fee. We will expand the role of the Information Commissioner, giving them the power to issue binding orders for disclosure. We will ensure that Access to Information applies to the Prime Minister’s and Ministers’ Offices, as well as administrative institutions that support Parliament and the courts."

The new bill does include a system of "proactive disclosures" for the PMO, MPs, Senators and ministers' offices and administrative institutions that support Parliament. They will have to post travel and hospitality expenses, which are often targets of ATI requests made by journalists. Ministers will also post sole-source contracts. These are usually for discretionary short-term hiring, consulting and purchasing, and are also frequent ATI targets, not just by media and interested political observers, but also by contractors who want to keep an eye on their competition.

Ministerial briefing notes, which are also targeted by media, will also be proactively disclosed. The bill, however, shields political decision-making from ATI requests, creating a sort of political privilege. Liberal insiders say that keeps the political aspects of government, just as discussions in opposition parties, not covered by ATI.

The system was hardly perfect before the bill was introduced. It’s slow, full of loopholes and exceptions, and allows bureaucrats to stall, often for years. The Information Commissioner, Suzanne Legault – who is supposed to be a sort of public ombud -- has been ineffective, although she has, from time to time, criticized the system.

The bill does not seem to grapple with the fact that some agencies, like the Health Canada, the Department of National Defence, the RCMP, Canada Revenue Agency, Correctional Services and Global Affairs Canada (formerly Foreign Affairs and International Trade) have appalling records of delays, stonewalling and withholding of information.

Recently, House of Commons committees have asked for an even more open system that would include Cabinet documents that are less than 20 years old. The new bill does not address this issue, nor does it begin to offer the sort of improvements that would salvage an increasing dysfunctional ATI system.