Campus Free Speech Needs to Include the Freedom to Report 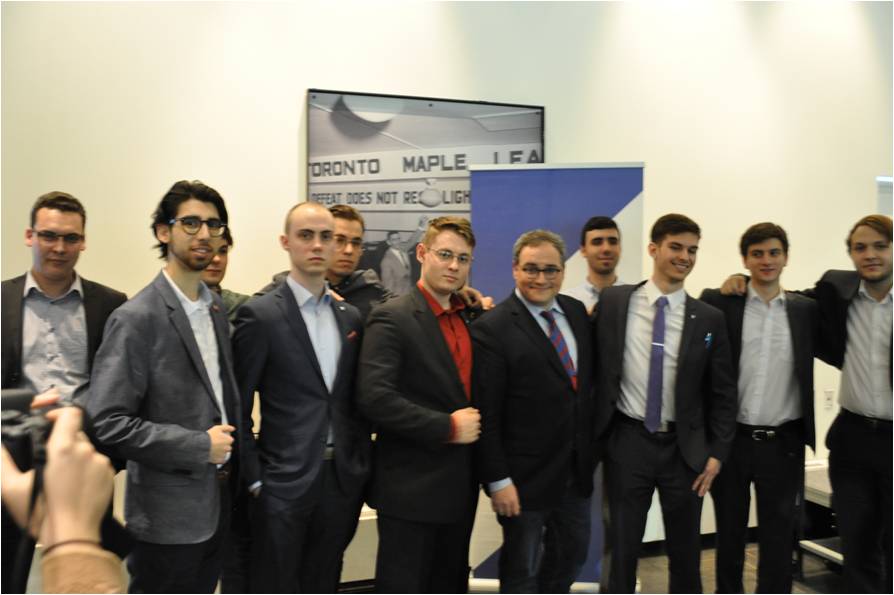 Ezra Levant poses with members of the Ryerson Campus Conservatives on March 22, 2017.

CJFE is concerned by reports that a Ryerson University campus group, the Ryerson Campus Conservatives (RCC), made the decision to bar a  journalist from a March 22, 2017, on-campus event they were hosting. Journalist and editor Alanna Rizza was reporting for Ryerson’s independent campus news outlet The Eyeopener when she and an editor for the Eyeopener were prevented from entering the event space. The event in question was a discussion of campus culture and the Middle East featuring journalist and pundit Ezra Levant.

Prior to the event, organizers expressed some concern about the security of the event and sent a public notice to all confirmed attendees that, for security reasons, attendance would be limited to Ryerson students. CJFE placed an inquiry on the event’s Facebook page about whether the prohibition on non-student attendance would extend to members of the press. 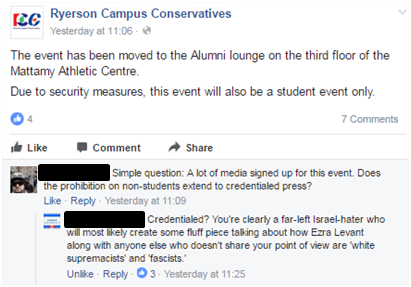 Subsequently, reporters for Torontoist, Canadaland and Sun Media reached out to the RCC both on Facebook and by email to confirm whether media attendance was being prohibited. An hour before the event’s scheduled start time, organizers confirmed by email and by social media posting that media would be admitted to the event, provided they could prove that they were with media.

According to Rizza, a reporter and editor for The Eyeopener arrived at the event about 15 minutes after it started. The Eyeopener is developing a story about free expression on campus and had been invited to attend by one of the student organizers. When the reporters attempted to enter the event, a person who identified themselves as private security for Ezra Levant challenged them and refused them entry. The reporters were identifiable as students and in possession of Ryerson student cards.

According to some guy who refuses to be named, Levant's head of security is not letting anymore people in. Including @theeyeopener pic.twitter.com/RMxjPWs0nO

When they persisted, Marshall John Darbyshire, Vice-President of Communications of the RCC, refused them entry for a second time, stating, “because I don’t like you.” It is unclear whether this statement was directed to the outlet or to the individual reporter. It has been brought to our attention that there is an organizational history between the RCC and The Eyeopener and personally between the involved parties, which stems from Rizza’s past commentary on campus issues.

Marshal John Darbyshire is refusing to let @theeyeopener in @AlannaRizza "Because I don't like you." She was personally invited to the event pic.twitter.com/oM7QmosDb8

CJFE representatives were in attendance at this event, and observed and filmed dozens of non-students in attendance. Reporters from campus news outlet The Ryersonian and a variety of off-campus outlets were able to access the event space.

There is no clear reason for selectively barring press access to this event and no clear risk to the event posed by two reporters from a campus paper. In a Ryersonian article about the event, Darbyshire is quoted saying, “Ezra Levant is a symbol for free speech.”  This is ironic as the behavior of Levant’s security and the RCC spokesperson calls the accuracy of this statement into question.

Darbyshire has since indicated to Rizza he is apologetic about his actions, a fact which he communicated to CJFE while also representing in that same communication he felt himself entitled to an apology from both the reporter and The Eyeopener.

The decision to prohibit a campus publication from attending a noteworthy political event hosted by a registered campus affiliate group violates the very first principle of Ryerson’s code of non-academic conduct, which states, “Every student enjoys within the University all rights and freedoms recognized by law.”  These rights include constitutionally protected rights to free expression and a free press. It is our conclusion that this decision by an event organizer negatively impacted The Eyeopener reporters’ ability to do their job. We urge the RCC to reconsider empowering individuals or granting space to groups in future whose practices or behavior infringe on fundamental civil liberties and on freedom of the press.