Can you take a picture? A look at your right to photograph in Canada 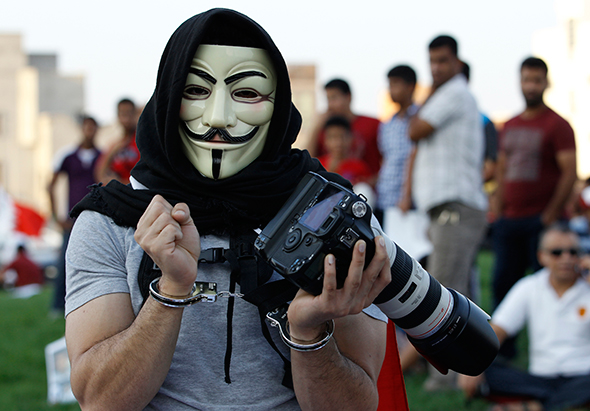 Scott Olson, a photographer for Getty Images, was arrested while covering protests in Ferguson, Missouri, in mid-August. Police shoved him into the back of a police van; he was later released. Olson’s crime, apparently, was that he was taking photos across the street from a designated “media area” police had told reporters and photographers to stay within.

Olson’s arrest was by no means the only harassment of journalists during the Ferguson protests. According to a Vox Media report, a police officer threatened to shoot one reporter live-streaming video. Another Vox report said police roughed up and arrested reporters from the Washington Post and Huffington Post and tear-gassed an Al Jazeera America camera crew.

One person commenting on a report about some of the Ferguson incidents said it made him glad to be a Canadian and not an American. Well, not so fast. Cases of journalists – and others – being arrested or harassed for taking photos or video may possibly be more numerous in the U.S., but they happen here too.

Last June Alex Consiglio, a photographer for the Toronto Star, was briefly arrested outside Toronto Union Station. Consiglio had taken photos of an altercation on a station platform, and left when security staff asked him to do so. Then, on the street outside, he took a photo of a station security staffer being brought out of the station on a stretcher. He was handcuffed and put in the back of a police cruiser, and his camera and phone were confiscated. Police then released him but gave him a $65 ticket for trespassing. The trespassing charge was later dropped.

Station authorities initially said their policy required pre-clearance for all “commercial photography” within the station and that they considered news photography commercial. They later backed down on the second part of that argument. They conceded that a reporter or photographer covering breaking news should not have to wait for permission to do his or her job and updated their media policy.

But the incident highlighted what some certainly see as a trend toward trying to outlaw the use of cameras even in public and semi-public places, an attempt with little or no basis in law.

It dates back to the September 11, 2001, terrorist attacks on New York and Washington, says John Lehmann, president of the News Photographers Association of Canada. “I think that police and security forces have been using 9/11 as an excuse to crack down on things that they don’t like,” Lehmann says. One of those things is anyone taking photos of police and security personnel while they’re doing their jobs.

In that case, Vancouver’s chief of police said publicly afterward that the officers were wrong and Payne had a right to take photos at the scene. The force reminded officers they can’t seize equipment from people who are not lawfully arrested.

Among the many questionable incidents during the G20 summit in Toronto in June 2010 was one in which Brett Gundlock and Colin O’Connor, photographers for the National Post, were arrested and spent the night in a detention centre. They were photographing clashes between police and demonstrators and were accused of obstructing peace officers and unlawful assembly.

The issue isn’t limited to official journalists. In fact, one reason for an increased number of such incidents in recent years is probably the fact that so many people now walk around with cameras – generally in the form of smartphones – in their pockets.

In July 2012 a Washington, D.C. police officer took Earl Staley Jr.’s cellphone when Staley tried to take photos of officers at the scene of an arrest. The phone was returned later, but with its memory card missing. The American Civil Liberties Union took the police force to court. The District of Columbia ACLU did not respond to inquiries about the outcome, and the lack of further records on the case suggests it was settled out of court.

CBC reported recently that Lesslie Askin, a 71-year-old British Columbia woman, had a visit from the National Security Division of the Royal Canadian Mounted Police after being spotted taking pictures of oil storage tanks in Burnaby. She said she was researching a presentation for a National Energy Board hearing. The company and police apparently considered her a terror suspect, though the interview with her seems to have satisfied them.

A U.S. website called Photography is Not a Crime chronicles incidents in which police have stopped or tried to stop photographers and videographers from taking pictures. The site contains numerous videos documenting some of the cases.

The American Legislative Exchange Council – a business-backed lobby group that proposes model legislation and tries to get it passed by U.S. state legislatures – has proposed a law that would make it illegal secretly to videotape animal cruelty on farms or to apply for a job without declaring oneself to be a journalist or member of an animal rights group.

The model bill would label anyone secretly taking photographs to expose animal cruelty as a terrorist, the New York Times reported. While no state has passed a law with that provision, at least three – Iowa, Utah and Missouri – have passed laws that make undercover exposés difficult. Critics label such legislation “ag-gag” laws.

In both Canada and the U.S., there is little or no basis for preventing anyone – journalist or ordinary citizen – from taking photos in a public place. Authorities might be justified in asking a photographer who was obstructing emergency workers or security personnel to get out of the way, says Peter Jacobsen, partner at Bersenas Jacobsen Chouest Thomson Blackburn LLP in Toronto and member of the board of Canadian Journalists for Free Expression (CJFE), and if that photographer refused to move he or she might be arrested. The publication of certain images might prejudice an investigation or trial, and an officer at the scene might warn a photographer of that, but the issue would be publication, not the taking of the photo.

“Generally speaking,” Jacobsen says, “when you’re on public property you can take any pictures you want.”

Private property is a different matter, even if the public are normally allowed there. A news photographer would be justified in taking photos in a shopping mall, Lehmann says, but if asked to stop, he or she would have to do so.

"Clearly, if the photography is in the pursuit of a legitimate breaking news story the taking of photos will be more justified. Nevertheless if asked to leave private property the law says the journalist must leave," says Jacobsen.

As for deleting pictures already taken, Jacobsen says, a court might have the right to order it or prevent dissemination but nobody else does. “Once you’ve taken the picture it is yours.”

William Kowalski, a member of the national affairs committee of PEN Canada, wrote in the Toronto Star soon after the Consiglio incident that “the situation in Canada has reached the point where it needs to be said loudly and clearly: there is no law against public photography in Canada; no one here can ever be arrested for the simple act of making a picture or film, unless other laws are being broken in the process; and police officers who are in uniform and executing their duties in public have no reasonable expectation of privacy.”

The right to take photos in public places belongs to everyone, whether journalist or ordinary citizen. However, Jacobsen argues that Section 2B of the Charter of Rights and Freedoms affords journalists added latitude to take photos for legitimate news purposes, so there is an argument that they have the right to do so where someone else might not.

According to a 1998 Supreme Court of Canada ruling, publishing a photo of a private individual may violate his or her privacy if the individual is not personally in the news and was not photographed as part of a crowd at a public event like a demonstration or sporting event. In that case the court awarded $2,000 in damages to a young woman who was photographed sitting on a doorstep and the photo used as an illustration of a story that had nothing to do with her personally. “You can’t just go and take a photo of someone and use it for art purposes,” says Jacobsen.

Whatever the law says, Lehmann says his advice to a photographer facing confiscation of equipment would be not to refuse but to hand it over and then call the office and ideally get a lawyer involved.

For some it seems obvious that the news media should be able to report the news without obstruction and that private citizens have the right to use their cameras when in a public place if they don’t obstruct, for instance, emergency personnel doing their jobs. But if you aren’t convinced, consider the video that Paul Pritchard took of Robert Dziekanski.

Dziekanski was of course the man RCMP officers killed with a Taser at Vancouver International Airport in 2007. Police said Dziekanski had been “combative” and that the Taser has been used twice. A video taken by Pritchard, a photographer who happened to be at the scene, showed Dziekanski merely holding a stapler and turning away from police, and showed the stun gun was fired five times. Pritchard initially turned the video over to police at their request to aid in their investigation, then went to court when they refused to return it. Aninquiry ruled the officers were unjustified in their use of the Taser and deliberately misrepresented their actions to investigators.

There are reasonable limits on photography, and Section 162 of the Canadian Criminal Code does prohibit secretly watching, photographing or making a video recording of anyone – including celebrities – at a time or in a place where the person is entitled to expect privacy. The worst behaviour of paparazzi would fall under this provision and could lead to a jail term.

It is hard to argue that paparazzi photos serve the public interest. But photos that can help to make public figures, police and security services accountable, or simply to inform the public about legitimate news, are a different matter. “We have to remain very vigilant about this,” Jacobsen says.