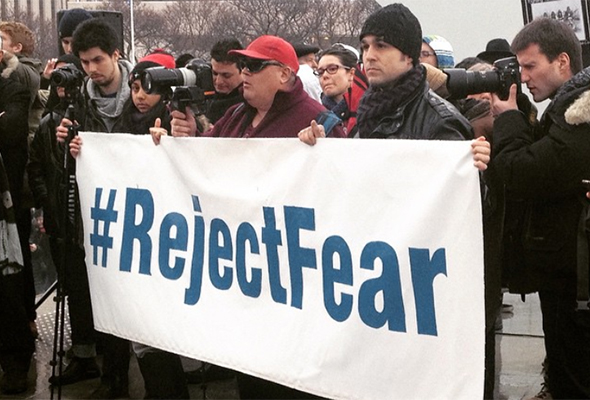 By Laura Tribe This past Saturday, Canadians across the country rallied against Bill C-51. Events were held in over 70 communities, with a number of groups gathering outside of their MPs' offices to show that they are extremely distressed by the proposed Anti-Terrorism Act.

Why are we concerned about the bill? Bill C-51 has received widespread criticism for a number of reasons. Of particular concern to CJFE is the lack of oversight regulating the increased powers introduced in the bill, and potential threats to free expression posed by extremely broad language used to criminalize "advocating or promoting terrorism." Under this provision, speech that is interpreted to be in support of terrorism, without demonstrating any intent to commit a terrorist act, could be seen as a criminal offense. As the government’s understanding of terrorism itself remains undefined, there is substantial anxiety that this legislation could be used against activists, protesters, and others speaking out, who have no intention of committing terrorist acts.

• BCCLA highlights 8 things you need to know about Bill C-51.
• Edward Snowden compared Bill C-51 to the U.S. Patriot Act
• Former prime ministers have joined forces to speak out against the Bill

Over 90,000 individuals have signed OpenMedia’s petition against Bill C-51. Add your name to the list of supporters: stopc51.ca

Check out some of the highlights Canada's Day of Action below.

More coverage of the protests:

Why should you be worried?