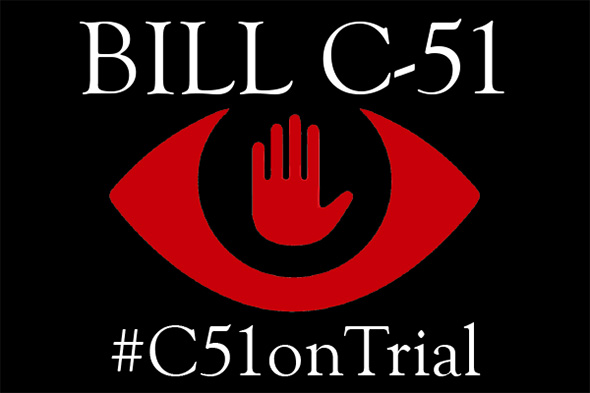 TORONTO (July 21, 2015) — The Canadian Civil Liberties Association (CCLA) and Canadian Journalists for Free Expression (CJFE) are initiating a Charter challenge today against key sections of Bill C-51, theAnti-terrorism Act, 2015. The legislation presents disturbing implications for free speech, privacy, the powers of government, including CSIS, and the protection of civil liberties in Canada.

The challenge will be filed with the Ontario Superior Court on the grounds that specific sections of Bill C-51 violate the Canadian Charter of Rights and Freedoms in a manner that is not justified in a free and democratic society. As such, these sections must be struck down as unconstitutional and of no force and effect.

“Bill C-51 is a grave threat to our rights in Canada. It will lead to censorship and a massive chill on free expression, and enables a potentially widespread abuse of power,” said Tom Henheffer, Executive Director of CJFE. “It unjustifiably infringes on the rights of all Canadians without making our country any more secure, and must be struck down.”

“We are challenging several provisions of Bill C-51 that in our view are unconstitutional,” said Sukanya Pillay, Executive Director and General Counsel of the Canadian Civil Liberties Association. “It creates broad and dangerous new powers, without commensurate accountability, and this can result in serious mistakes.” She continued, “Some of the powers granted by Bill C-51 are secretive in nature, so the public may never know if and when Canadians' rights are being violated, though individuals will be faced with the fallout.”

The challenge will address five key components of Bill C-51, which violate the Charter unjustifiably and must be struck down. These components feature amendments to (1) the CSIS Act, (2) the Immigration and Refugee Protection Act, and (3) the Criminal Code with respect to “advocating or promoting terrorism”. The challenge will also address (4) the new Secure Air Travel Act as well as (5) the newSecurity of Canada Information Sharing Act.

Individuals and groups interested in supporting the challenge are encouraged to donate to a crowdfunding campaign at gofundme.com/C51onTrial; they can also share the campaign on social media using #C51onTrial.

Bill C-51 poses a fundamental threat to Canadians’ rights and civil liberties, which are critical to a healthy, functioning democracy. Join us in our efforts to dismantle Bill C-51 and protect the rights and freedoms valued by Canadians.

Canadian Journalists for Free Expression (CJFE) monitors, defends and reports on free expression and access to information in Canada and abroad. Rooted in the field of journalism, we promote a free media as essential to a fair and open society. CJFE boldly champions the free expression rights of all people, and encourages and supports individuals and groups in the protection of their own and others' free expression rights. cjfe.org

The Canadian Civil Liberties Association is an independent, non-partisan, national organization, which promotes and defends fundamental human rights and civil liberties in Canada. Started in 1964, the Association conducts research, public education, and advocacy aimed at ensuring the protection and full exercise of those rights and liberties. The Corporation of the Canadian Civil Liberties Association (CCLA) was constituted in 1985 and shares the objectives of the Association. ccla.org