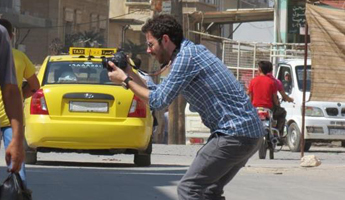 Rami Jarrah is one of CJFE's two 2012 International press Freedom Award recipients. He will be honoured at the CJFE Gala: A Night to Honour Courageous Reporting, on December 5, 2012.

By Brendan McGeagh and Amy Johnson

At a time when the international press was barred from covering the uprising in Syria, the dogged work of one young citizen journalist and his fledgling media group has given voice to a stifled community. Born in Cyprus to Syrian activist parents and raised in the U.K., where he studied journalism, Rami Jarrah went to Syria in 2004 and worked as a consultant for an appliance and electronics distribution company. It wasn’t until the early- 2011 Arab Spring protests in Tunisia and Egypt inspired similar demonstrations in Syria that he put his journalism skills to work.

Jarrah filmed the protests he participated in from the first, but it was after his second protest that he recognized the urgent need to show the world the disintegrating situation in Syria. Arrested at the Damascus protest on March 25, 2011, Jarrah was subjected to intimidation, starvation and torture over three days at the hands of Syrian intelligence officers. After his release, he began providing protest footage and speaking to international media under the pseudonym Alexander Page. Tension with his employer over Jarrah’s refusal to participate in an event supporting Syrian President Bashar al-Assad proved to be the last straw, and Jarrah left his job and committed his time to exposing Syria’s dire political situation.

Jarrah’s reports circulated widely in spite of Syria’s attempts to restrict the flow of information to the outside world. The Alexander Page moniker was an attempt to protect Jarrah’s ability to report honestly and safely, but his identity was eventually leaked to Air Force Intelligence, a notoriously repressive arm of the State, and he was forced to flee to Cairo with his family.

Egypt was stabilizing in the wake of its own uprising, and he felt it was the best place in the region to continue reporting on events in Syria while remaining in relative safety. Jarrah and his family continue to reside in Cairo, where he has co-founded the independent citizen press group ANA New Media Association. Under Jarrah’s guidance, ANA supports a network of journalists in Syria, and is aiming to provide training and equipment. In direct opposition to the biased coverage of state-sanctioned Arabic media, ANA provides honest accounts of citizens on the front lines of Syria’s civil war. Major international news outlets have turned to ANA for the striking raw footage gathered by its brave members. ANA is moving towards greater self-sufficiency, and is launching a radio station, ANA Radio, from Cairo.

Jarrah’s mission is to ensure that the voices of Syrians are heard around the world. His story embodies the spirit of CJFE’s International Press Freedom Award; working against tremendous odds to produce news in the public interest, Jarrah has risked life and liberty to tell stories that the international community would not have otherwise heard.