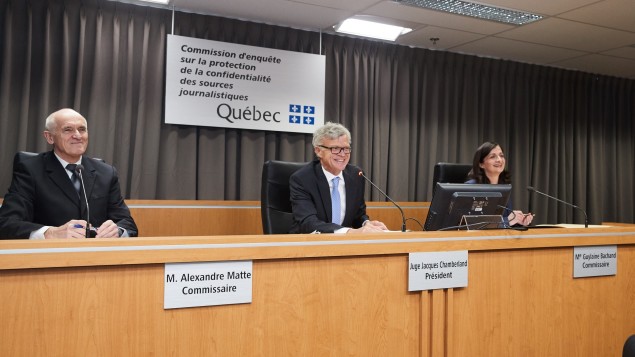 Canadian Journalists for Free Expression (CJFE) and Reporters Without Borders (RSF) welcome the recommendations of the Chamberland Commission on Protection of Confidentiality of Journalistic Sources, and its clear statements in support of the important role of press freedom and source protection in democratic society.

The Chamberland Commission issued a report on December 14 in response to revelations in 2016 that at least 13 Quebec journalists were targeted by a judicial authorization application in order to ascertain the identity of their anonymous sources. CJFE and RSF submitted a written memorandum to the Chamberland Commission that offered recommendations to better protect source confidentiality.

The Quebec spying scandal was cited as one of the factors behind Canada’s decline in this year’s RSF World Press Freedom Index. In 2016, Canada fell from 18th to 22nd place. Only two years ago, Canada was ranked in the top 10.

We suggest the definition of ‘journalist’ in any new legislation be widened beyond the federal legislation to reflect the emergence of newer practitioners of journalism such as citizen journalists, and to include the many who would not list the craft as their “main occupation.”

CJFE and RSF also welcome the Commission’s supplementary recommendations covering police investigation practices, judicial authorizations and contacts between police and the media, and call on the government of Quebec to adopt them in full.

We applaud Justice Minister Stéphanie Vallée and Public Security Minister Martin Coiteux for their promise to carry out the Commission’s recommendations. The government of Quebec must now act swiftly to enact the the Chamberland Commission’s recommendations, and ensure that journalists in Quebec have the legal protections they need to perform their crucial public-interest role.

A copy of this letter was sent to Quebec Justice Minister Stéphanie Vallée and Public Security Minister Martin Coiteux.