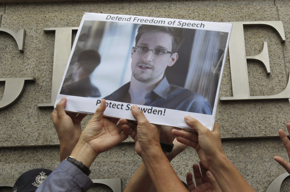 by Stefan Rinas CJFE is closely monitoring the results of the recent whistleblowing actions taken by Edward Snowden, former employee of Booz Allen Hamilton, who has shed light on extensive information gathering activities of the United States National Security Agency (NSA) under the auspices of its PRISM program, and through a court order requiring telecom provider Verizon to disclose data relating to the phone calls of many of its customers. On Sunday, June 9, English newspaper The Guardian published an interview with Snowden citing him as its source for articles describing the extent of some of the NSA’s most invasive programs (that we know of). The Guardian claims that PRISM grants the NSA direct access to personal communication histories on the servers of companies such as Facebook, Google, and Apple. Such activities can hamper freedom of expression by chilling public and private discussion. Snowden’s revelations have led Google, Microsoft, Twitter, and Facebook to demand the right to greater transparency in their discussion of requests they receive for data on their customers. In late May, Snowden fled to Hong Kong, where he remains. If the United States submits an application for his return, Snowden can appeal the request in the Hong Kong court system. If he fails, he may be subject to prosecution under what is commonly known as the Espionage Act of 1917, which makes it an offence to transfer information to unauthorized recipients that the authorized party reasonably believes “could be used to the injury of the United States or to the advantage of any foreign nation.” Snowden could face imprisonment for up to ten years. The Guardian reports that he would not receive any benefit from the Whistleblower Protection Act of 1989 due its excluding those working for the armed services or intelligence community. The activities revealed by Snowden have a Canadian parallel. Information on the use and location of mobile devices—or metadata—which had been the subject of the NSA court order of Verizon, is also the subject of a surveillance program by Communications Security Establishment Canada (CSEC). It is then worrisome that the Canadian Government appears eager to expand the legal grounds for such activities with the “Investigative Powers for the 21st Century Act” (Bill C-46), and the “Technical Assistance for Law Enforcement in the 21st Century Act” (Bill C-47). It is therefore extremely pressing to have a more transparent dialogue about the uses to which Canadians’ personal information is being put, and it is unfortunate that such transparency often depends on actions taken by whistleblowers at great personal risk. To this end, the reported intention of Privacy Commissioner Jennifer Stoddart to discuss the prospect of a more transparent CSEC with that agency's commissioner is encouraging. CJFE applauds the efforts of whistleblowers like Edward Snowden, whose actions, particularly in a context that raises awareness of invasions into personal privacy, both embody and further the values of freedom of expression. The relationship between privacy and free expression is the subject of an article by Laura Tribe in CJFE’s 2012/2013 Review of Free Expression in Canada. The Review can be downloaded here.