CSIS must keep promise to report on surveillance of journalists 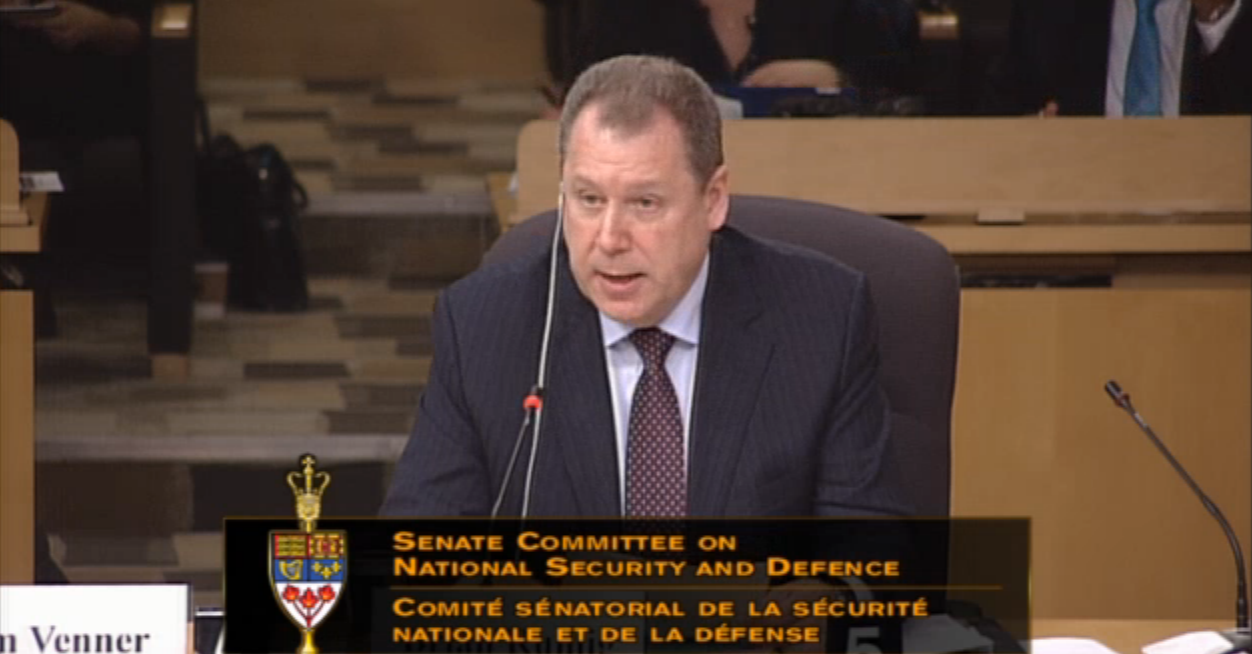 Brian Rumig, Assistant Director of Operations at CSIS, speaking before the a November 28, 2016 meeting of the Standing Senate Committee on National Security and Defence. PHOTO: Senate ParlVU.

Correction: A former version of this post implied, incorrectly, that the definition of ‘threat to the security of Canada’ that guides CSIS operations was changed in Bill C-51. The definition found in the CSIS Act has remained static since 1984. Bill C-51 expanded whole-of-government information sharing provisions in the Security of Canada Information Sharing Act, which includes a definition of "activities that undermine the security of Canada," which goes far beyond the language found in the CSIS Act. For the possible implications of this change on the activities of CSIS see this submission from the Office of the Privacy Commissioner.

CJFE is concerned that the Canadian Security Intelligence Service (CSIS) has backtracked on its promise to reveal to a Senate committee the agency’s history of spying on Canadian journalists and media workers. We call on CSIS to be fully transparent with Canadians about surveillance activities that relate to sensitive public interest sectors like journalism.

During the November 28, 2016 meeting of the Standing Senate Committee on National Security and Defence, Senator Claude Carignan, the Leader of the Opposition in the Senate of Canada, asked CSIS officials to ”confirm that no journalists were put under surveillance in the past.” The following dialogue ensued:

Brian Rumig, Assistant Director of Operations at CSIS: I'm going to guess, because I don't have that information privy to me at the moment, that in the past, in the course of 30 years of this service being in existence, yes, there might have been journalists who because of their activity in support of threats to the security of Canada might have been investigated by us. Currently, I don't know those numbers, and I don't know the context.

Senator Carignan: Would you be able to commit to providing us with that information?

Now it is reported that CSIS will break this unequivocal promise to provide basic information about its activities, saying “we regret that we cannot confirm whether journalists have been the subject of any CSIS investigation.”

This is a blow to basic democratic accountability, and a demonstration by CSIS of sublime indifference towards one of the few organs of the government mandated to examine and report on Canada’s opaque national security system. Especially in the wake of a scathing ruling from a Federal Court that CSIS breached its duty of candour in failing to reveal the existence of a secret metadata program, it further undermines public trust and confidence in the Service.

CJFE calls on the Ministry for Public Safety and CSIS to immediately and truthfully address the calls for transparency on the scope of its surveillance activities of Canadian journalists and confirm whether any journalists have been, or are currently, the subject of investigations. We believe this information to be in the public interest while posing no operational threats to CSIS.

The public interest value of this information is highlighted by the recent case of VICE News journalist Ben Makuch, who is engaged in court actions against the Royal Canadian Mounted Police (RCMP) to set a precedent on the confidentiality of journalistic sources. Agencies such as CSIS using Canadian journalists as arms of their investigations greatly undermines press freedom and acts as a hindrance for sources to come forward in important matters of public interest.