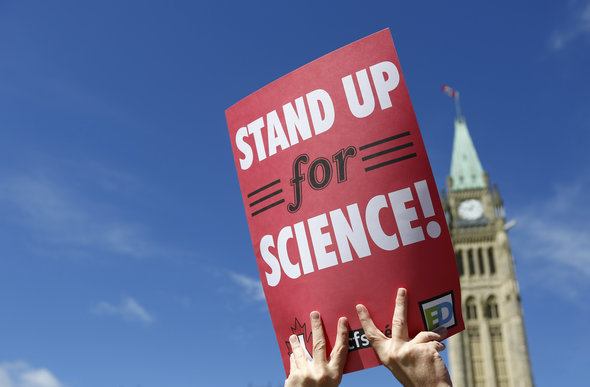 A protester holds a sign during a 'Stand Up for Science' demonstration calling on the federal government to support and fund scientific research on Parliament Hill in Ottawa, September 16, 2013. PHOTO: REUTERS/Chris Wattie

CCJFE is extremely concerned by the Canadian government’s continued muzzling of Canada’s federal scientists and failure to support and disclose important research in the public interest. Numerous actions and government policies are actively hindering the ability of scientists to conduct and widely share their research findings with the public, which not only poses a serious threat to the ability of scientists to perform their work, but also impedes the Canadian public’s right to know.

CJFE is a member of the coalition of organizations supporting the Write2Know campaign, a call to unmuzzle Canada’s federal scientists and support research in the public interest.

The past few years in Canada have seen hundreds of research programs cancelled, thousands of scientistsfired, libraries and archives closed, and scientists prevented from speaking to the media and public about their work due to government communications policies.

Crucial scientific questions are going unanswered as a direct result of these funding cuts and restrictions on access to federal research. Research on a wide number of issues is being impacted, but the Write2Know campaign is focusing specifically on the following:

The muzzling of Canadian scientists has been recognized outside our national borders, and has already hurt the country’s position on the international stage. A report released in February from the Council of Canadian Academies found that Canada is falling behind the rest of the world when it comes to the digital preservation of archives and public data. In October 2014, hundreds of scientists around the world signed an open letterasking you to end the “burdensome restrictions on scientific communication and collaboration faced by Canadian government scientists.”

CJFE has been tracking the disturbing number of events that have contributed to the muzzling of scientistssince 2012 and the timeline by Scientists for the Right to Know extends back to 2007. The breadth and significance of the problem is undeniable.

When long-term data is lost, it simply cannot be recovered. The research being conducted by federal scientists with Canadian tax dollars forms a bedrock of data, information, and knowledge about the health and safety of humans and our environment. A chronological break in Canada’s collective memory of scientific, social, and cultural knowledge poses a threat to current policies and practices, as well as future research. Information is critical to ensure that citizens can engage fully in the democratic process and make informed decisions about their own and their families’ lives. Without it our fundamental right to free expression, guaranteed under Canada’s Charter of Rights and Freedoms, cannot be fulfilled.

CJFE calls on the Canadian government to critically examine all of its policy decisions that affect federal science programs and institutions, and commit to holistic changes that will stop the muzzling of its federal scientists and support the research and dissemination of critical issues in the public interest.

This letter of concern was sent to The Right Honourable Stephen Harper, Prime Minister of Canada.

The Honourable Leona Aglukkaq, Minster of the Environment

The Honourable Kirsty Duncan, Liberal Critic for Status of Women

The Honourable Ted Hsu, Liberal Critic for Science and Technology

The Honourable Megan Leslie, Official Opposition Critic for the Environment

The Honourable Lawrence MacAulay, Liberal Critic for Fisheries and Oceans

The Honourable Elizabeth May, Leader, Green Party of Canada

The Honourable John McKay, Liberal Critic for the Environment

The Honourable Gail Shea, Minister of Fisheries and Oceans