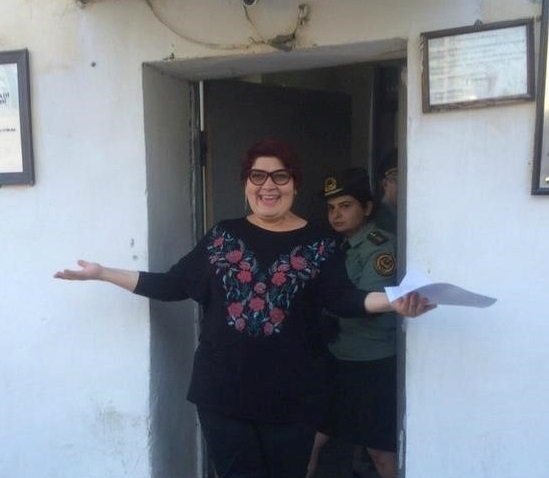 Canadian Journalists for Free Expression (CJFE) is relieved by today's decision by the Supreme Court of Azerbaijan to release investigative reporter Khadija Ismayilova on probation. Khadija was sentenced to seven-and-a-half years in prison on trumped-up charges in September 2015, and had been detained since December 2014. The court amended the judgement to three-and-a-half years of suspended sentence, subject to a travel ban and other restrictions. The Baku Court of Grave Crimes had convicted her on charges of illegal entrepreneurship, tax evasion, abuse of office and embezzlement; the court today reversed the latter two charges.

Ismayilova is the recipient of numerous awards for her investigative work and her courage in facing official persecution, including the 2016 UNESCO/Guillermo Cano World Press Freedom Prize . Her journalism exposed corruption and nepotism among the ruling elite of Azerbaijan, up to and including President Ilham Aliyev and his family. The Panama Papers subsequently corroborated much of her work.

For all of this, Ismayilova has been subject to harsh persecution and abuse. In March 2012 an anonymous party secretly planted a camera in her bedroom, then threatened publish the images it took if she did not “behave.” Ismayilova defied this attempt at blackmail.

Since her arrest in 2014, she spent a total of 537 days in detention on absurd, unjust charges for offenses she did not commit. She investigated, without fear or favour, the people of power, wealth and influence who preferred that their own corruption stayed hidden. She should never have spent a day in prison.

Azerbaijan remains one of the worst countries in the world for press freedom. The 2005 murder of journalist Elmar Huseynov remains uninvestigated, one of countless crimes against journalists in Azerbaijan that has been met with complete impunity. Dozens of prisoners of conscience remain in Azerbaijani jails on trumped-up charges. Independent voices are being silenced, and journalists and human rights defenders are being harassed by authorities.

In the face of this dire situation, Ismayilova’s release is something to celebrate and to savour before we get back to the task at hand. As she said in her speech at the Press Freedom Award ceremony, read by her mother in her absence, “As you gather here tonight, I ask you not to laud my work or my courage, but to dedicate yourself to the work each one of you can do on behalf of press freedom and justice…for all of us.… There is much work that remains to be done.”

Please join CJFE in Toronto on Friday, May 27, Khadija’s 40th birthday, as people in cities around the world gather to celebrate her release, call for her full acquittal of all charges, and call for the release of the remaining political prisoners in Azerbaijan.