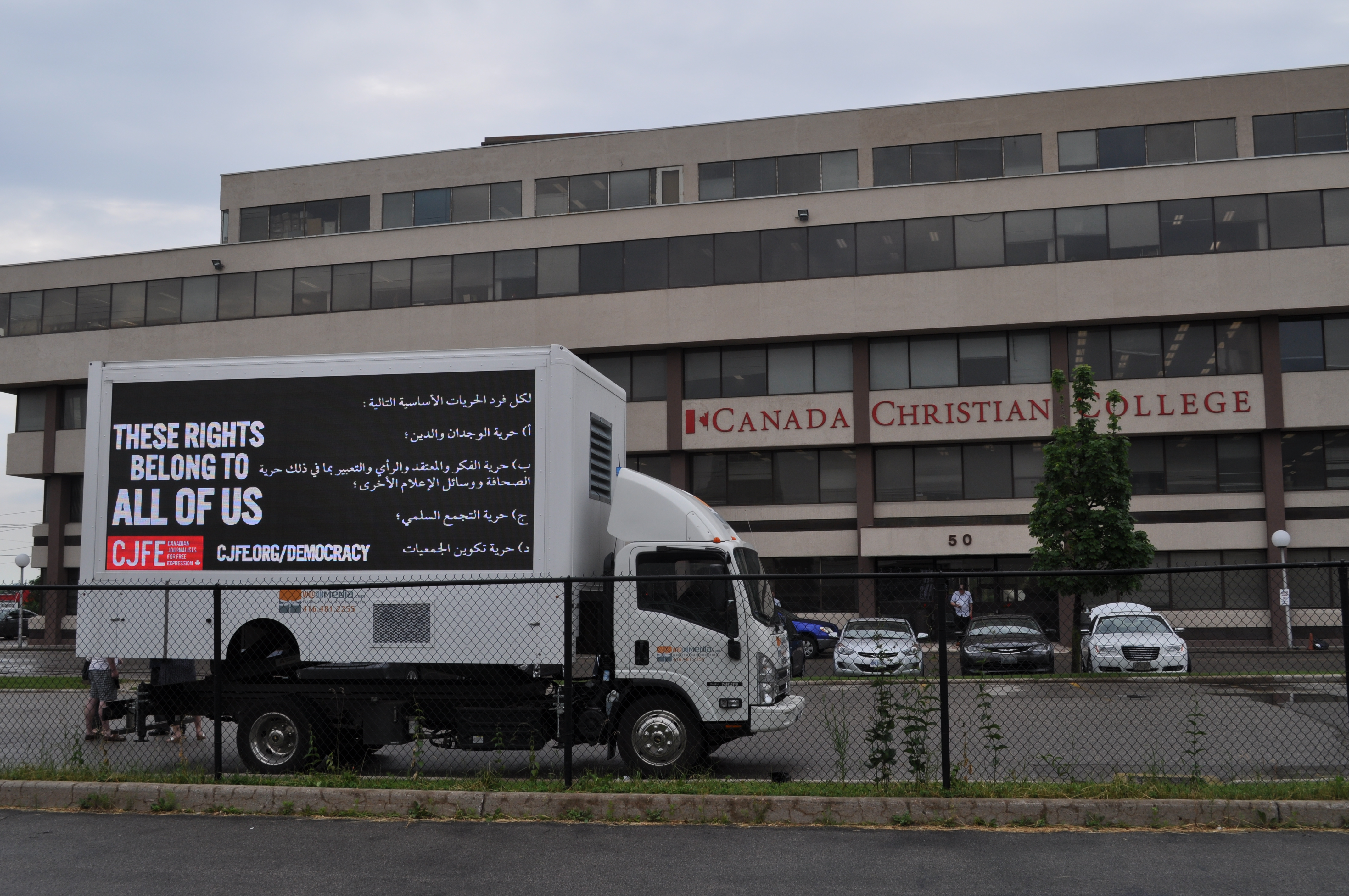 The activity was designed to defend democracy and challenge the rise of hate in Canada. Photo: Kevin Metcalf

Toronto, ON (June 19, 2017)—On June 17, 2017, Canadian Journalists for Free Expression (CJFE) attended a conference held by far-right media group The Rebel, and contracted a video billboard truck to display a video advertisement in support of CJFE’s latest public awareness campaign. The campaign seeks to defend democracy and challenge public assumptions about human rights in Canada, based at cjfe.org/democracy.

The advertisements feature section 2 of the Canadian Charter of Rights and Freedoms in Arabic accompanied by the English-language message, "These Rights Belong to All of Us." Section 2 enshrines the rights to freedom of expression, press, religion and association.  The concept for the advertisement is borrowed from a high-profile billboard campaign by the American Civil Liberties Union designed by New York-based agency Emergence Creative.

CJFE is striving to raise awareness about the rise in prominence of anti-democratic hate groups in Canada and the increased use of ‘free expression’ as a shield for overtly Islamophobic sentiment. They are also working to highlight the need for civil society to take a stand and challenge extreme rhetoric.  The Rebel Media has played a prominent role in the resurgence of far-right movements in Canada and around the world.

The 'Rebel Live' event featured several notable speakers from the political right, including University of Toronto professor Jordan Peterson, who has argued that the recently passed Bill C-16 represents a threat to free expression. This interpretation of the bill has been readily rejected by CJFE, the Canadian Civil Liberties Association, the Canadian Bar Assocation, and other free expression and civil liberties organizations. Also featured was Rebel Media employee and founder of the far-right "fight club" the 'Proud Boys' Gavin McInnes, who responded to suggestions for increased dialogue with the political left by calling on The Rebel supporters to "stop talking to satanic retards."

According to media watchdog site Canadaland, two journalists were prevented from attending the event by organizers. Organizers attributed this decision to past critical tweets that had fact-checked statements by The Rebel.

"Obviously barring media outlets because of critical coverage appears to be arbitrary and hypocritical," said CJFE Campaigns and Advocacy Coordinator Duncan Pike. "Our activity is about improving civil discourse, challenging hateful narratives and standing up for universal values. While The Rebel certainly has the right to use provocative or inflammatory language, we also have a responsibility to challenge bad ideas that dehumanize marginalized groups. Our democratic rights belong to everyone."

CJFE previously published letters of support for The Rebel after the Alberta Legislature moved to bar their accreditation and after the UNFCCC barred the outlet access to the Conference of Parties climate summit in Marrakesh.

In addition to the video projection at The Rebel event, CJFE's ad campaign is running on billboards in Toronto’s transit system for the next five weeks. CJFE hopes to use funds raised to expand the advertising campaign to other locations and transit systems, including the Peel Region. Far-right groups have announced plans to conduct weekly protests outside of public high-schools in Peel, starting in September. These groups are opposed to accommodations the Peel School Board has made for Muslim prayers in public schools.