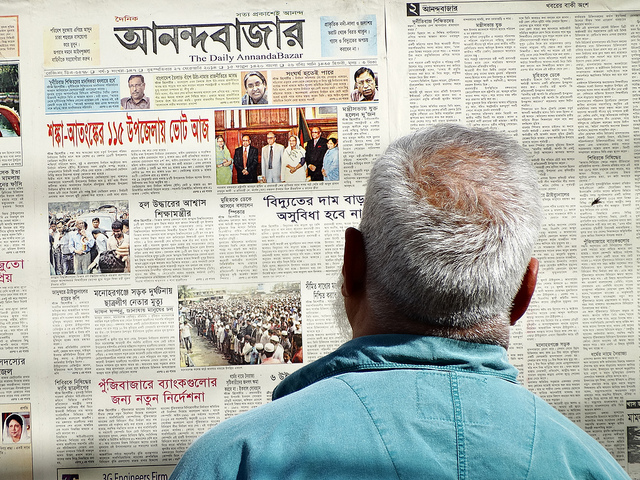 CJFE strongly condemns the arrest of opposition journalist and senior editor Shafik Rehman on April 16, 2016. Rehman was arrested on suspicion of sedition and allegedly conspiring in a plot to kill Sajeeb Wazed, the son of Prime Minister Sheikh Hasina Wazed. Rehman, 81, edits the popular magazine Mouchake Dhil, and is a leading figure in the opposition Bangladesh Nationalist Party (BNP). He is a close advisor to Begum Khaleda Zia, chairperson of the BNP and chief political rival to Prime Minister Hasina.

Rehman’s arrest occurs amid a worrying deterioration of press freedom in Bangladesh, specifically targeting opposition media. He is the third pro-opposition editor to be detained since 2013, as independent media organizations face concerted attacks from the government and intelligence agencies. Mahfuz Anam, editor of the English-language Daily Star newspaper, faces 79 legal claims and a possible 175 years in jail for defamation and sedition. Bangladesh’s largest mobile phone operator, Grameenphone, was ordered by the Bangladeshi military intelligence agency to cease advertising for the Daily Star and its sister publication, Prothom Alo, in what amount to a clear attack on the material existence of an independent media outlet. The editor of Prothom Alo, Matuir Rahman, likewise faces sedition charges and allegations of involvement in the plot to kill Sajeeb Wazed. These incidents are compounded by attacks on workers in alternative media, such as the six secular bloggers killed in the last year.

CJFE demands Rehman’s immediate release and an end to efforts by the Bangladeshi government to undermine opposition and dissident journalists. The government of Prime Minister Hasina has a responsibility to respect and uphold freedom of expression and press freedom, which are guaranteed in the Constitution of Bangladesh and are critical to maintaining a healthy democratic society.

His Excellency Kamrul Ahsan, High Commissioner for Bangladesh in Canada