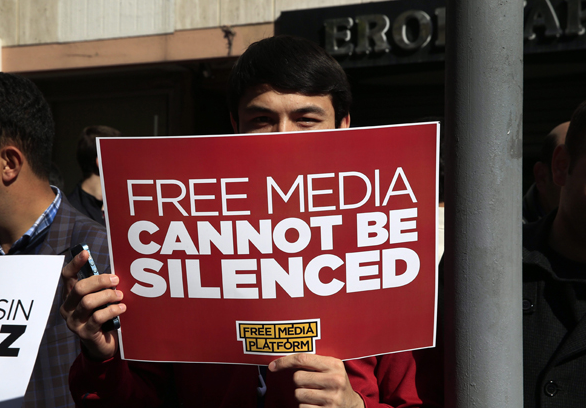 A protester holding a placard demonstrates across the street from the headquarters of a media company in Istanbul, Wednesday, Oct. 28, 2015. PHOTO: AP/Lefteris Pitarakis
Tuesday, November 10, 2015

CJFE is concerned by the crackdown on Turkish media that is seen as critical of the government in the lead up to Turkey’s November 1st election. On October 28, Turkish police raided and seized the headquarters of Koza-Ipek, a media group owned by an ally of Fethullah Gulen, the U.S.-based leader of the Hizmet movement and a rival of President Recep Tayyip Erdoğan. The police disconnected the signals for TV channels owned by the media group, and shot tear gas and water cannons to disperse hundreds of protesters gathered outside. This followed previous raids in August and September, and an arrest warrant issued for its board chairman.

In related incidents, 44 people were arrested on November 3 on suspicion for connections with Gulen, and two Nokta magazine editors were arrested and charged with plotting a coup due to a magazine cover which criticized the recent election outcome. The magazine was ordered to withdraw the publication by an Istanbul court. These follow a chain of increased attacks on opposition media by the Turkish government, including Koza-Ipek’s three TV stations and two dailies, as well as 16 other companies.

Broadly worded anti-terror and penal code statutes have permitted Turkish officials to conflate the investigation of sensitive topics and groups with outright terrorism. In one case, Mohammed Ismael Rasool, a fixer for VICE News, has remained imprisoned in Turkey on charges of “aiding a terrorist organization” for over nine weeks. Turkey ranks 149th out of 180 countries in the 2015 Reporters Without Borders Press Freedom Index, and a recent emergency field mission found that pressure on journalists operating in Turkey has severely escalated, and is likely to have a negative impact on Turkey’s democracy.

This letter of concern follows many exchanges with your delegation about press freedom violations in Turkey, and repeated calls for the release of illegitimately detained media workers We thank Your Excellency for responding and engaging in this dialogue. CJFE continues to urge the Turkish government to permit media groups and personnel to operate freely in the country without fear of unfounded persecution. In addition, CJFE calls for an end to the abuse of broadly worded anti-terror laws used to chill reporting on matters of public interest or criticism of public figures.

This letter of concern was sent to His Excellency Selçuk Ünal, Ambassador of the Republic of Turkey to Canada.
Cc: Mr. John Holmes, Ambassador of Canada to Turkey, Georgia, Azerbaijan and Turkmenistan
The Honourable Stéphane Dion, Canadian Minister of Foreign Affairs