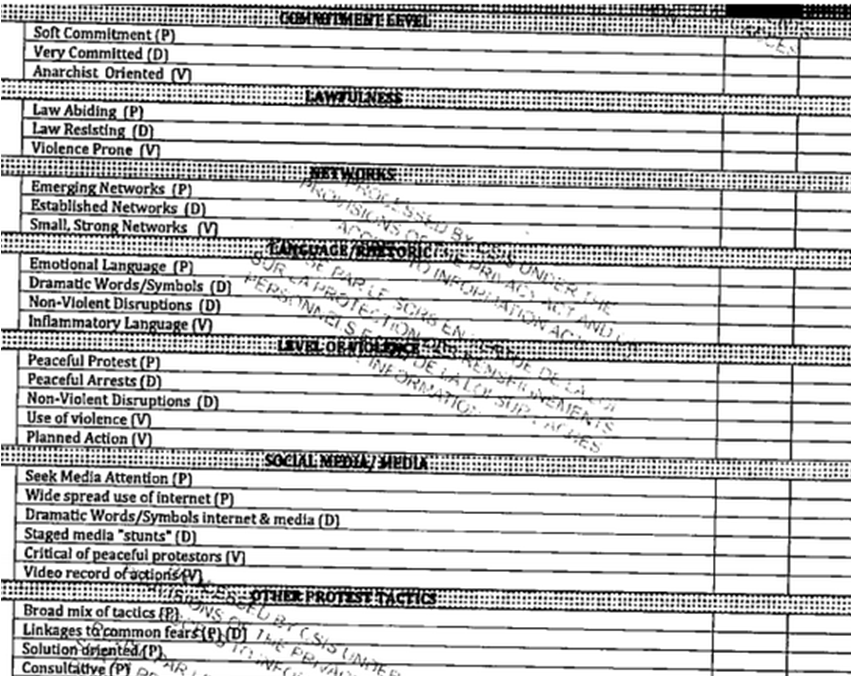 CJFE is gravely concerned about an RCMP intelligence gathering operation between April and September 2014 that targeted Indigenous participants in land defence protests. During this time, the Royal Canadian Mounted Police (RCMP) developed profiles of 89 Indigenous organizers across the country. This operation, called Project SITKA, came to light through RCMP documents obtained through Access to Information requests, and was subsequently reported on by Aboriginal People’s Television Network (APTN).

Activists connected with civil society groups including the Unist’ot’en Camp, the Indigenous Environmental Network, No One Is Illegal and the Council of Canadians were tracked and their personal information collected in a database, including very personal details that are not a matter of public record. The information collected also included a general analysis of threat behaviors, such as the content or tone of each individual's speech or advocacy. 'Emotional language', 'dramatic words/symbols', 'seeking media attention' and 'wide spread (sic) use of internet' are listed on the RCMP’s internal taxonomy of threat attributes, directly counter to the free speech protections in the Canadian Charter of Rights and Freedoms.

The background document for SITKA describes the project as an attempt to identify the 3-5% of protesters who might cause property damage or economic loss. Innocent advocates were investigated and catalogued based on little more than a perceived potential threat that their expression might pose to the state. Despite law enforcement surveillance requiring a reasonable suspicion for criminal activity, the RCMP unreasonably targeted citizens affiliated with groups, political movements, ideologies and forms of expression that are protected. This reckless program was undertaken without reasonable grounds and in violation of the Charter-protected rights to free expression and privacy.

The revelation of Project SITKA marks only one instance in a troubling trend of erosion of Canadians’ freedoms of expression and assembly. The Anti-terrorism Act, 2015, (Bill C-51) has introduced an expansion of powers to Canada’s security agencies like the RCMP, in direct violation of our constitutional rights, and many experts explicitly warn that the provisions regarding the “promotion of terrorism” and “critical infrastructure” could be specifically used to target advocacy rooted in Indigenous communities. It is our fear that such provisions will allow for more and greater instances of unreasonable surveillance of innocent citizens. In recent months, we have already been apprised of police surveillance of journalists in Quebec and illegal metadata retention by CSIS, as well as the ongoing RCMP prosecution of VICE News journalist Ben Makuch for protecting the independence of journalists and their sources.

It is critically important in a democracy that the public and oversight bodies are able to hold our security services to account for their actions, especially those that stand in violation of our protected rights and freedoms. CJFE calls for reckless surveillance programs like Project SITKA to be ceased, and for Canadians to be reassured that free expression and advocacy will not be criminalized. CJFE further calls on the government to move forward with a policy of transparency regarding past and ongoing activities of our publicly funded security services with respect to the monitoring and policing of free speech, advocacy and dissent.

This letter was sent to Prime Minister Justin Trudeau.