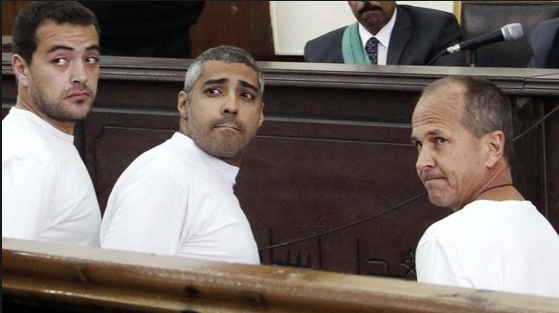 Toronto, ON (August 29, 2015)—Canadian Journalists for Free Expression (CJFE) condemns theconviction of Canadian journalist Mohamed Fahmy, his Egyptian colleague Baher Mohamed and his Australian colleague Peter Greste. Fahmy’s conviction follows a year and a half of campaigning from media and press freedom organizations around the world, which began when Fahmy, Mohamed and Peter Greste were first arrested on fabricated terrorism charges on December 29, 2013.

The Al-Jazeera journalists were convicted of operating without a license and spreading false news that endangers national security, and sentenced to three years in prison. Fahmy and Baher were taken into custody immediately following the trial. Greste had been deported to Australia earlier this year and was convicted in absentia.

Today’s verdict marks the final judgment in the Al Jazeera reporters’ retrial, which began February 12; the journalists were originally convicted on June 23, 2014 of assisting the banned Muslim Brotherhood, producing false news to endanger national security and operating without a license. Since Greste’s retrial took place in absentia he was unjustly convicted of all the charges against him, something that holds ominous implications for his future freedom of movement and work as a foreign correspondent. Canadian Mohamed Fahmy and Egyptian Baher Mohamed were led away from court following the verdict.

“The conviction of Mohamed Fahmy on completely spurious charges demonstrates that there is neither press freedom in Egypt nor fairness in the Egyptian judicial system,” said Tom Henheffer, Executive Director at Canadian Journalists for Free Expression. “The Egyptian government must ensure his swift deportation to Canada; this will require rapid action from the Canadian government, and we call on Prime Minister Stephen Harper to use all available resources to bring Mohamed back home.”

CJFE urges the Egyptian authorities to deport Mohamed Fahmy immediately and also calls on the Canadian government to take action to secure Fahmy’s extradition. It is unclear how long it will be before Fahmy returns to Canada as he is currently on a no-fly list. After 19 months in excruciating legal limbo, he must be allowed to return home and resume his life as soon as possible. Further, CJFE urges the Egyptian government to pardon both Baher Mohamed and Peter Greste as soon as possible.

There are up to 60 other journalists currently languishing in Egyptian jails. Journalism is not a crime and the Egyptian government must free all prisoners of conscience immediately and unconditionally.

For more information about the persecution of Mohamed Fahmy, Peter Greste and Baher Mohamed, and the #FreeAJstaff campaign, visit cjfe.org/FreeAJstaff.

For more information or to request interviews please contact: