CJFE marks the 34th Day of the Imprisoned Writer 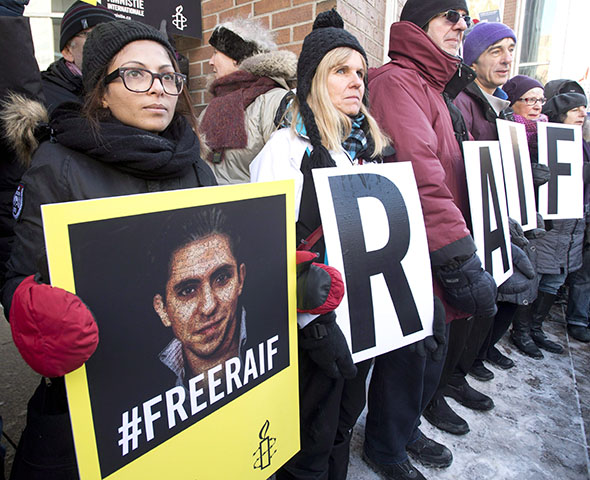 November 15 marks the Day of the Imprisoned Writer, bringing international attention to the unjust imprisonment and persecution of writers around the world.

In the past year, CJFE has celebrated the release of unjustly imprisoned writers and free speech advocates including Canadian journalist Mohamed Fahmy after nearly 2 years of trials and two convictions in Egypt, and Syrian advocate Mazen Darwish after three and a half years of arbitrary detention. However, the press freedom and free expression situation around the world continues to deteriorate each year, and an increasing number of writers are imprisoned or facing greater threats and attacks for their work. In their 2014 annual census, the Committee to Protect Journalists named 221 journalists jailed worldwide, with dozens in countries like China, Iran and Eritrea; many remain imprisoned today, while others are newly arrested and convicted.

We join PEN International centres in highlighting writers around the world who are currently imprisoned for their work and advocating for their freedom.

Raif Badawi is a Saudi Arabian editor and blogger who has been imprisoned since 2012 for “insulting Islam” and “founding a liberal website.” He was sentenced this year to ten years in prison, 1,000 lashes and a fine of one million Saudi riyals (over $260,000 USD), suffering the first 50 lashes in January 2015. The remaining rounds of lashes have been postponed on medical grounds after the brutal first round was completed. Badawi has also been banned from travelling and participating in any form of media for an additional ten years after his prison sentence ends. His wife, Ensaf Haidar, and their children were granted refugee status in Sherbrooke, Québec, in October 2013. Join the campaign to free Raif Badawi. #FreeRaif

Khadija Ismayilova is an internationally renowned, award-winning investigative journalist from Azerbaijan who has been imprisoned since 2014 on spurious charges. She had exposed multiple cases of severe, high-level corruption in the Azerbaijani government. Since her detention on trumped-up charges of “incitement to suicide,” she has been further charged with misappropriation, tax evasion and abuse of power. Ismayilova has repeatedly been denied bail and her trial and appeal dates have been continually delayed. #FreeKhadija

Eskinder Nega is an Ethiopian editor and journalist who was arrested in September 2011 on spurious terrorism-related charges. He was convicted in June 2012 and sentenced to 18 years in jail, a verdictupheld by Ethiopia’s Supreme Court in his appeal. Nega had challenged the government’s misuse of broadly-worded antiterrorism legislation used to arrest journalists and disputed the arrest of government critic Debebe Eshetu. #FreeEskinderNega

Liu Xiabo is a Chinese writer, activist and central figure of the 1989 Tiananmen Square protests who has been imprisoned since December 2008. Liu is a highly respected literary critic and has challenged state ideology and human rights violations in his own books. Despite winning the 2010 Nobel Peace Prize, he continues to serve an 11-year sentence for “inciting subversion of state power.” At the time of his arrest, Liu was the lead author of a political manifesto calling for an independent judiciary and freedom of expression and association. His wife, poet and artist Liu Xia, was placed under house arrest in 2010, and continues to be detained without charge or legal due process.

Write a letter today to advocate for an imprisoned writer.