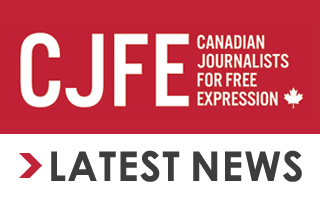 We are excited to announce that on Wednesday, March 4, CJFE will be holding an event featuring a live conversation with Edward Snowden, the launch of an exciting new free expression initiative, and a panel discussion on the future of mass surveillance and privacy in Canada. Snowden will be taking questions from the audience, as well as from Twitter, so let us know what you want him to answer! Send in your questions using the hashtag #AskSnowden and tune in to the livestream to see the results. More event details can be found at cjfe.org/asksnowden.

In other news, to continue improving CJFE and the fight for free expression, we’ve launched a crowdfunding campaign for our annual Review of Free Expression in Canada. If you'd like to support CJFE and the Review, you can donate or, for a limited time only, join CJFE as a member at a discount of 70%!

It’s been a busy month for the #FreeAJStaff campaign, with developments both positive and negative in the journalists' case. Peter Greste was released and returned to Australia, while a retrial was scheduled for Canadian Mohamed Fahmy and Egyptian Baher Mohamed. The two journalists were granted bail pending the retrial, which was then adjourned from February 23 to March 8. Take a look at all of our #FreeAJstaff updates below.

What we've been up to:

What’s coming up in March:

Thanks for reading our newsletter and we hope you have a wonderful month.