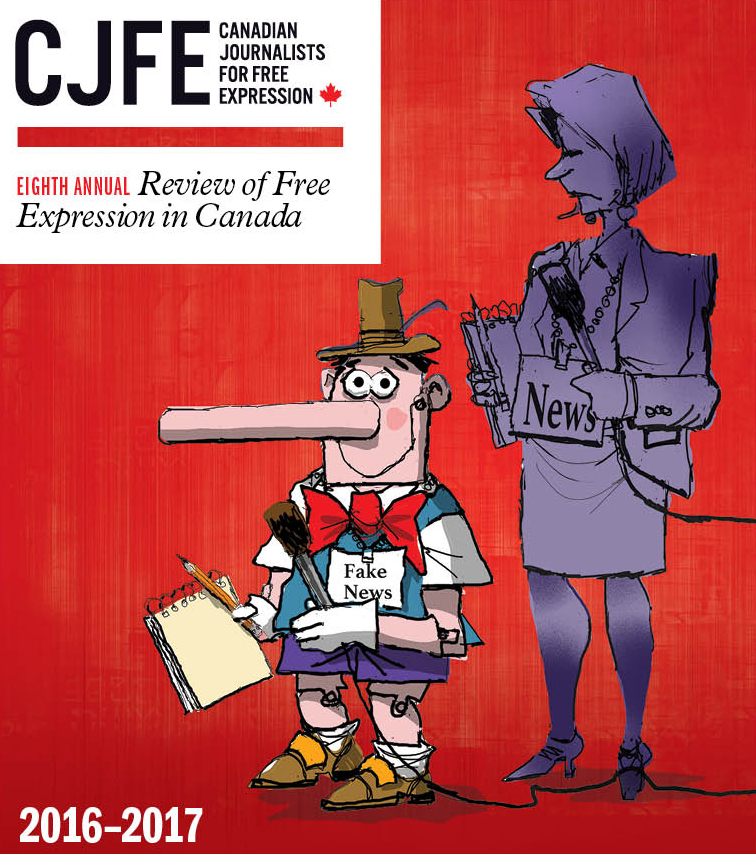 TORONTO (May 3, 2017) – The rise of “fake news” and increased surveillance of journalists pose new threats to democracy and free expression in Canada, according to Canadian Journalists for Free Expression (CJFE)’s 2016-17 Review of Free Expression in Canada, released today. The eighth annual report shines a spotlight on the effects of these growing phenomena on the public’s ability to engage with reliable information.

A poll question on the balance between national security and protecting the privacy rights of Canadians yielded mixed results, with 43 per cent saying the federal government is striking the right balance and 31 per cent saying there should be more emphasis on national security. Only 12 per cent believe the balance has swung too far away from human rights in the name of national security. However, while Canadians do want a strong national security apparatus, a majority of survey respondents draw a line in the sand when it comes to the government coming after journalistic sources. Seventy per cent of respondents agreed that journalists should not be compelled to turn over confidential information or identify sources to law enforcement agencies.

“Trump-style politics are moving north, and Canadians are increasingly divided and confused about finding reliable information,” says CJFE Executive Director Tom Henheffer. “With fake news rising, journalistic sources drying up and traditional newsrooms shrinking, Canada is facing unprecedented threats to democracy and free expression, but Canadians are seeing these threats approaching and are fighting back.”

In addition to in-depth analyses of these issues, the Review also includes a signature Report Card, grading Canadian institutions and their handling of free expression issues. While last year’s report card included some improvements and many promises from the government to bring considerable change, 2017 has seen little action on fixing the ongoing issues while new threats to free expression and press freedom are cropping up.

The Review is launched each year to coincide with World Press Freedom Day, celebrated annually on May 3. The only publication of its kind, the Review looks at the most pressing issues of free expression over the course of the year, and examines trends, breakthroughs and obstacles to freedom of expression in Canada.

For a copy of the Review, please visit CJFE.org/2017review.

Canadian Journalists for Free Expression (CJFE) monitors, defends and reports on free expression and access to information in Canada and abroad. Rooted in the field of journalism, we promote a free media as essential to a fair and open society. CJFE boldly champions the free expression rights of all people, and encourages and supports individuals and groups in the protection of their own and others' free expression rights. cjfe.org

Nanos conducted a hybrid telephone and online random survey of 1,000 Canadians between April 1 and 4, 2017, as part of an omnibus survey. Participants were randomly recruited by telephone (including both land- and cell-lines across Canada) using live agents and administered a survey online. The results were statistically checked and weighted by age and gender using the latest Census information, and the sample is geographically stratified to be representative of Canada. The margin of error for a random survey of 1,000 Canadians is ±3.1 percentage points, 19 times out of 20. Charts may not add up to 100 due to rounding.

For more information and to request interviews, please contact: