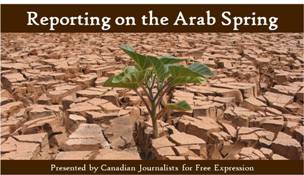 On Wednesday June 22, CJFE is holding our Annual General Meeting at 6pm in the Upper Library at Massey College. Following the meeting, we invite both members and non-members to join us for a discussion with Canadian journalists who have faced the challenges of covering the Middle East and North Africa uprisings, reporting from countries including Egypt, Libya and Yemen. Light refreshments and a cash bar will be available. When: Wednesday, June 22, 2011 Doors open at 7:30pm Event starts at 8:00pm Online: Live blog at live.cjfe.org Add comments via Twitter with #cjfelive Where: Common Room, Massey College 4 Devonshire Place, Toronto Massey College is located on the University of Toronto campus.
View Larger Map .

. Panellists: Heba Aly, producer for CBC Radio One's The Current Heba Aly is a producer for CBC Radio One’s The Current and a former recipient of the Pulitzer Center on Crisis Reporting for journalists covering under-reported areas. She has reported from Kenya, Sudan, Senegal and Chad, filing for a variety of outlets including CBC News, Bloomberg News, the Globe and Mail, the Christian Science Monitor, Public Radio International and IRIN. Recently, Heba reported on the revolution in Egypt and created the documentaries ‘The Price to Pay’ and ‘Now That It’s Mine,’ which both aired on The Current. Lynn Burgess, producer for CBC News’ The National Lynn Burgess is an award-winning producer at CBC News’ The National. She produced ‘Getting Away with Murder’, the CBC News investigation into the assassination of Lebanon’s Rafik Hariri. Lynn has reported extensively throughout the Middle East, including the West Bank, Gaza and Israel. She was in Pakistan in October 2001 and in both Pakistan and Afghanistan in early 2003. Recently, Lynn has reported on the revolutions in Egypt and Libya. Michelle Shephard, journalist for the Toronto Star Michelle Shephard is the Toronto Star’s National Security Reporter. She speaks frequently about terrorism and civil rights, and has appeared on various stations including CNN, NBC, Al Jazeera, BBC and CBC. During her sixteen years in journalism Michelle has won Canada’s top two newspaper awards: the National Newspaper Award; and the Governor General’s Michener Award for public service journalism. Her first book, ‘Guantanamo's Child: The Untold Story of Omar Khadr,’ was published in March 2008. Michelle’s second book, ‘Decade of Fear: Reporting from Terrorism's Grey Zone’ will be released in September 2011. Sonia Verma, reporter for the Globe and Mail Sonia Verma is a reporter for the Globe and Mail writing for the foreign desk. She joined The Globe in the spring of 2009 and has reported from more than a dozen countries for Canadian, American and British newspapers including The Times of London and New York Newsday. She was previously based in the Middle East where she reported on the Palestinian-Israeli conflict, the war in southern Lebanon and the rise of Hamas. Most recently, Sonia has reported on elections in Afghanistan and Haiti, and the revolution in Egypt. Moderator: Anna Maria Tremonti, host of CBC Radio One's The Current Anna Maria Tremonti has been the host of The Current on CBC Radio One since its creation in 2002. Prior to that, she spent almost two decades as a television correspondent, primarily for The National and the Fifth Estate. She was a foreign correspondent based in Berlin, London, Jerusalem and Washington in the 1990s. She has reported on several wars and conflicts, and from approximately 30 countries. She also covered politics on Parliament Hill for over four years. Anna Maria is a member of CJFE's Board of Directors. 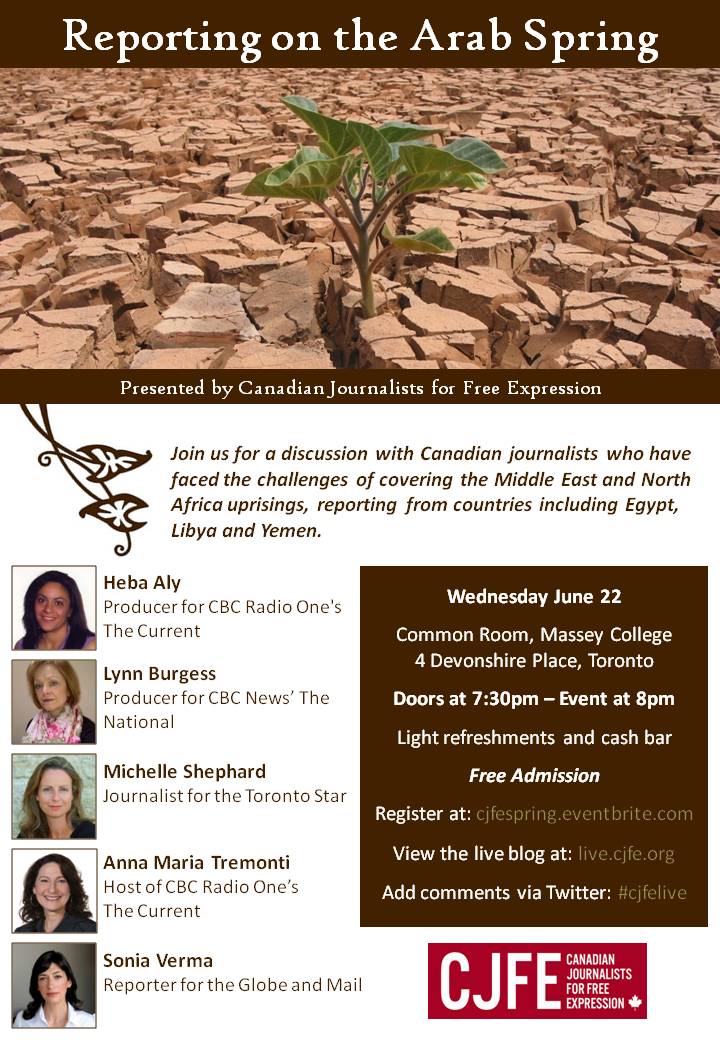