CJFE: Statement on the assault of an employee by right wing extremists

0 reactions
UPDATE: A formal report with specific details of the incident was filed with Toronto Police Services on May 9, 2017.

On May 6, 2017, an employee of Canadian Journalists for Free Expression (CJFE) was assaulted by cultural supremacists at a “free speech” rally against Motion 103 (M-103) at Nathan Phillips Square in Toronto. Kevin Metcalf is the Promotions and Communications Coordinator for CJFE, and was filming and reporting on the demonstration activities. Metcalf wrote an article in March that explicitly outlined CJFE’s position on M-103 and debunked its status as a ‘free expression’ issue. CJFE is horrified by this gross breach of free expression rights and the clear impunity from justice which the perpetrators enjoyed in their aggressive assault on a member of the media.

At the rally, Metcalf witnessed the arrival of around two dozen individuals dressed in body armor, face masks, helmets and paramilitary-style fatigues, carrying metal flagpoles draped with the Canadian flag.  Metcalf was greeted by name as the group entered the square; he was known by the cultural supremacists in attendance and had been subject to threats of violence online in the past as a result of both his professional and personal writings and advocacy.

Early in the rally, a senior member of the Jewish Defence League (JDL) is caught on video pointing out Metcalf to another JDL member. Both individuals participated in the later assault. The JDL is a banned extremist organization in the US but remains active in Canada. Canadian group members recently brutally beat an elderly demonstrator at a rally in Washington, DC.

Members of the Jewish Defence League point out a reporter moments before participating in a group assault.

A scuffle ensued between the arriving group and counterdemonstrators who were already assembled. This was broken up quickly by police but lead to the hospitalization of an anti-racist demonstrator with a serious head injury. The injured demonstrator had previously been threatened by the JDL at a rally on April 1, who screamed ‘smash her face.’

As Metcalf continued to peacefully film the interactions between protesting groups, two individuals initiated an aggressive confrontation. One of the two individuals was the subject of a previous CJFE alert. 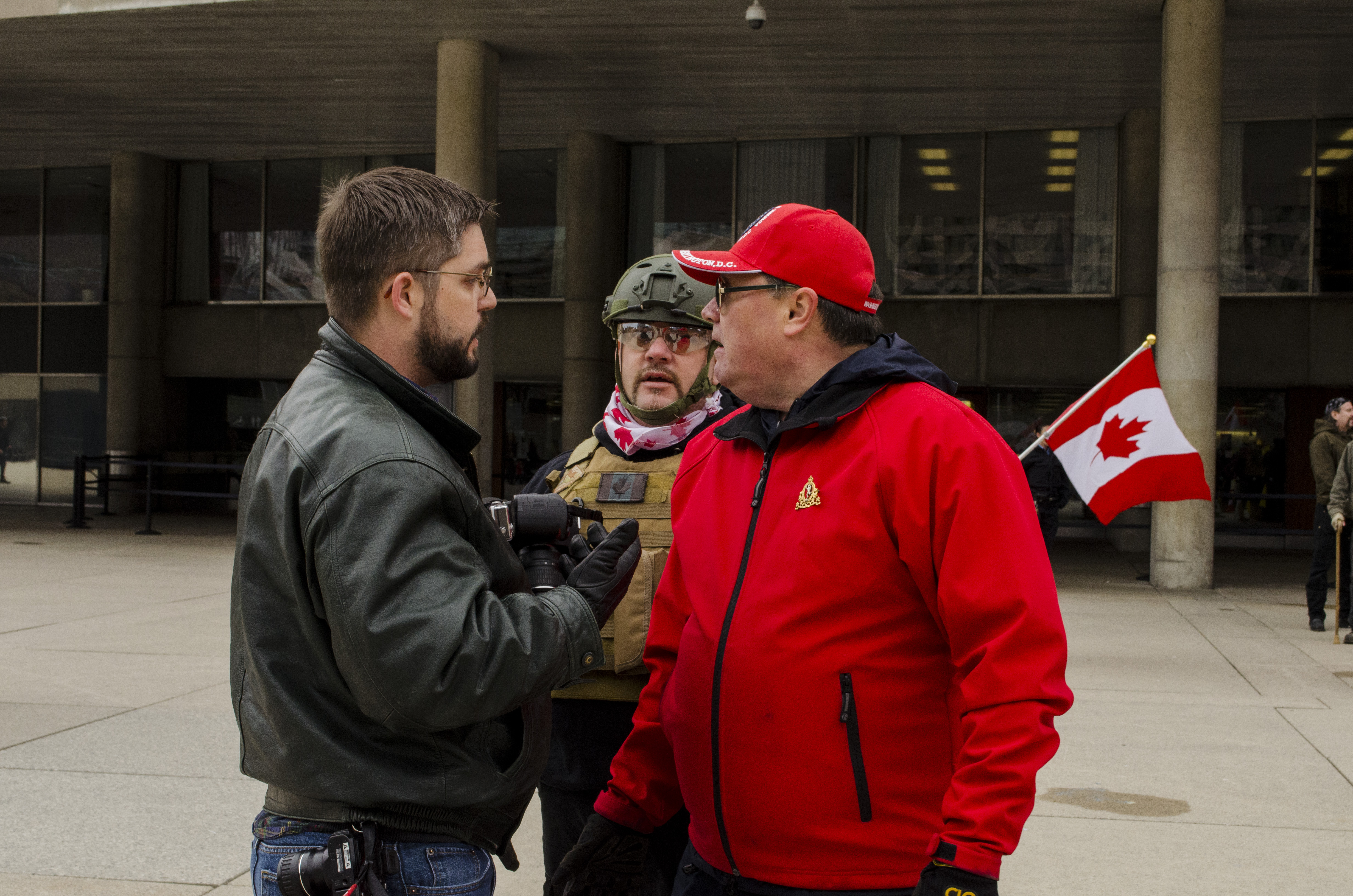 The individual in red (right) was previously the subject of a CJFE alert.

The harassers pushed his handheld DSLR camera and used overt physical contact to try to prevent him filming while taunting him with profanity. One offered to “visit [you] at home.” When this proved unsuccessful as a deterrent they demanded that police ask Metcalf to leave. Police refused as there is no prohibition on filming an event in public, and advised the cultural supremacists to ‘walk away.’ CJFE continues to advocate for the rights of reporters to cover public events safely and freely.

Moments later, a demonstrator walked purposely and directly into Metcalf, shoved him backwards and managed to disable his camera. 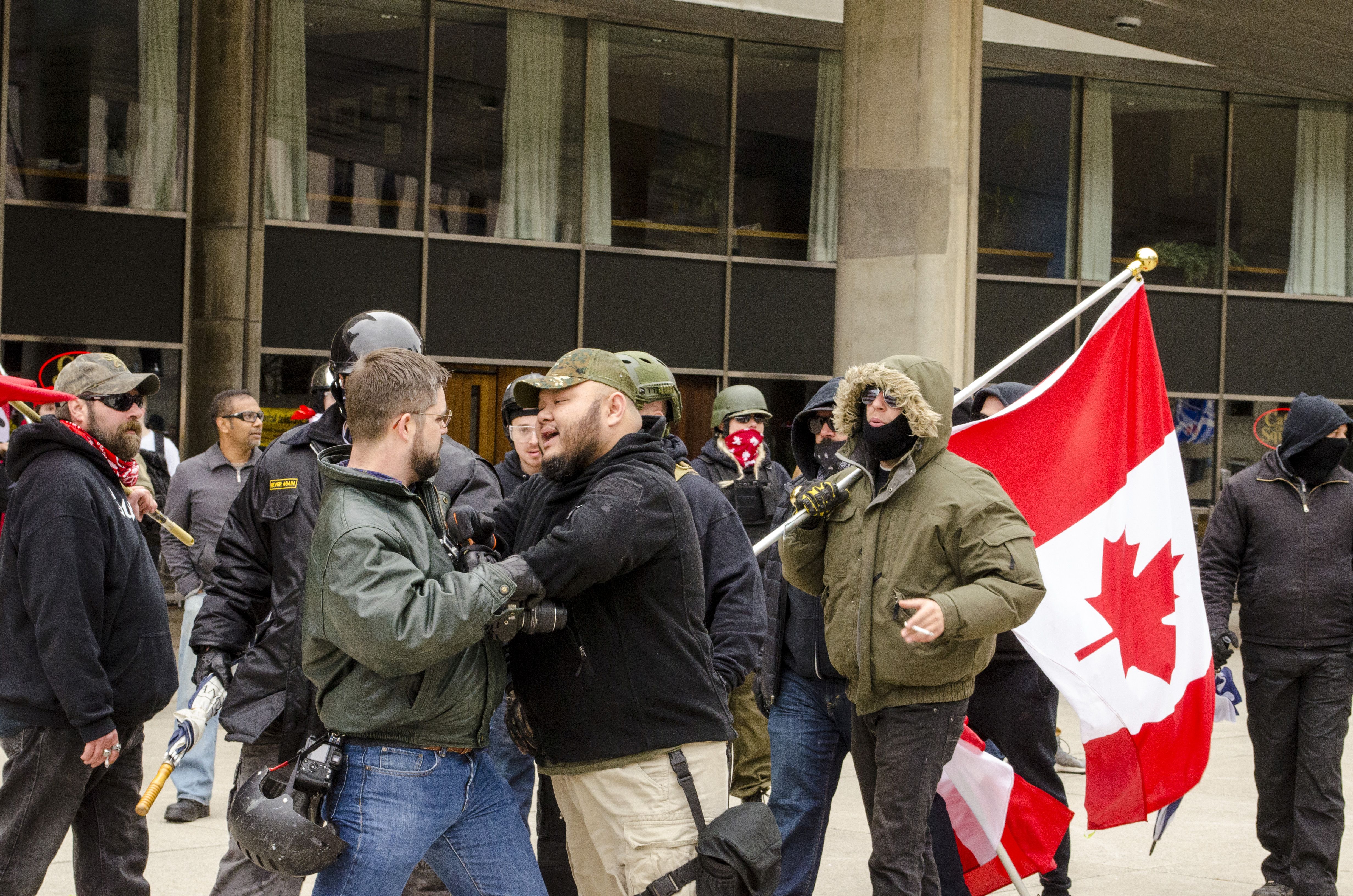 The first assailant disabled a body camera worn by Metcalf.

As this happened, the police officer commanding the police line that separated the two groups of demonstrators called nearby officers away.  An individual with black safety glasses then sprinted across the square and body-checked Metcalf, following this up with a deliberate headbutt. 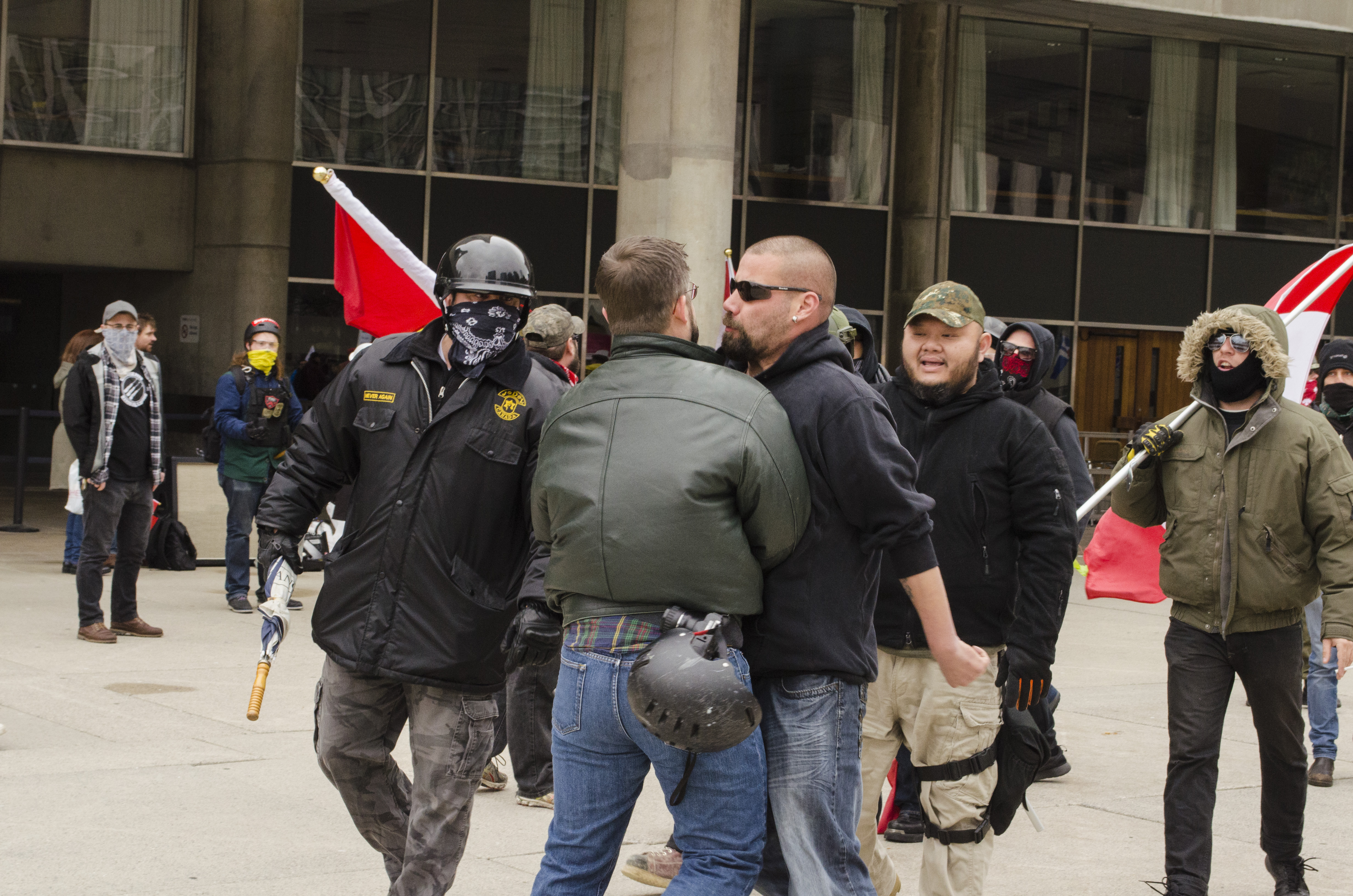 A freelance photographer captured the most serious moment of the assault.

Metcalf stumbled backwards and was pushed again, jabbed with a flagpole and threatened explicitly and repeatedly with death. The situation continued to escalate until rally organizer Sandra Solomon approached with a megaphone and instructed the assailants to “let him go.” Following the event, an edited image of Metcalf, bloodied and bruised, was circulated on social media.

CJFE is horrified by the organized and seemingly premeditated efforts to assault someone reporting on a demonstration. In a deliberate attack on free expression, the assailants identified a reporter who disagreed with them and then took steps to harm him and inhibit his right to record the activities. The victim’s body-mounted camera was damaged by both an assailant and a police officer, and police officers were ordered away as the assault unfolded, raising concerns about the relationship between police and the demonstrating group.

Death threats, physical assault and online hate campaigns directed against persons exercising their right to film in public and publish their opinions must be condemned in the strongest of terms. Further, there is a responsibility for police to identify and prosecute not just the individuals but the criminal apparatuses that facilitated this act of violence in a public square. The City of Toronto bears responsibility for playing host to a violent group that claims “freedom of speech” as a shield for their activities while assaulting and threatening their peaceful critics for their published opinions. 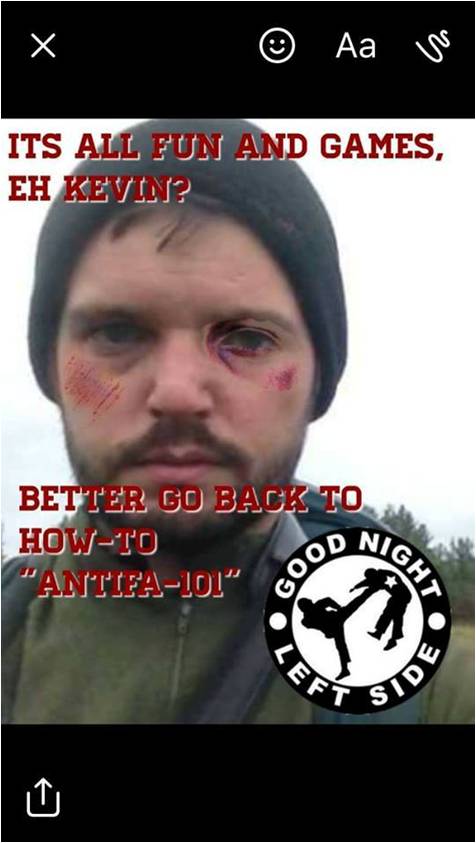 Metcalf says he is shocked by the assault but undeterred. “It is really shocking. I spend my days reading about this sort of thing happening in other countries. To have it happen here? The only words I can think of are shock and disbelief.” He continued, “I’m taking more precautions in public now, but my experiences shouldn’t scare others off. [Cultural supremacists] seem to be afraid of having their actions filmed and published. There are groups using this tactic to fight extremists like ISIS at great personal cost. Do you want to fight back against hate and extremism? Point it out, film it, report on it, call it out for what it is. Encourage people to get involved in opposing it. Don’t let fear get in the way of the truth.”

Around the world, reporters, journalists and correspondents face reprisals, threats and death for their work. CJFE has reported on similar instances in countries around the world, including Bangladesh, Honduras and Pakistan. When governments and law enforcers fail to protect the fundamental rights to free expression and press freedom, they reinforce a culture of impunity. If the city of Toronto and the Toronto Police Service fail to act according to the law in instances like this, they are unwilling or unable to defend the Charter rights and freedoms of Canadians. We sincerely hope this is not the case.

Kevin Metcalf is CJFE’s Promotions and Communications Coordinator. In his spare time, he volunteers as Operations Coordinator for Stop C-51: Toronto (STOPC51TO), curator of the Facebook page “Tracking Hate and Racist Extremism around Toronto” (THREAT) and as a researcher and community organizer helping to monitor the rise of far-right and extremist groups in Canada.