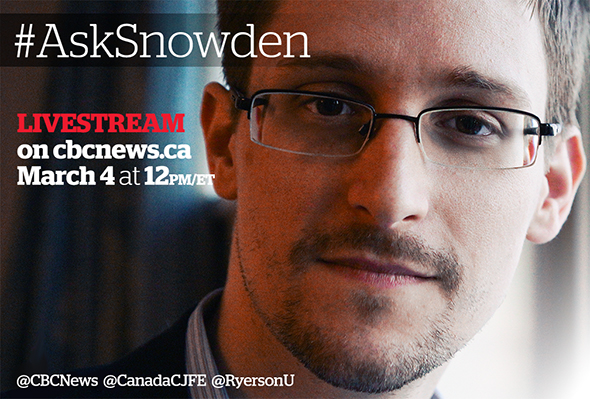 “Canada and the Security State” will foster conversation on surveillance in Canada TORONTO, ON – Canadian Journalists for Free Expression (CJFE) is hosting an event on the state of digital surveillance in Canada, featuring a live Q&A with Edward Snowden. NSA whistleblower, and subject of the Oscar-winning documentary “Citizenfour,” Edward Snowden has sparked an international conversation on surveillance, privacy, and national security. But in the wake of the Snowden leaks, what have we learned? Where are we headed? And what questions remain? Moderated by Anna Maria Tremonti, Host of CBC Radio One’s The Current and CJFE Board member, Snowden will be answering questions from individuals in attendance, and submitted in advance via Twitter. Canadians can submit their questions for Edward Snowden using #AskSnowden on Twitter. The event will be live streamed at CBCNews.ca. Following the Q&A with Snowden, the event will feature a panel discussion with Canadian experts discussing the implications of these revelations for the country, and the future of digital surveillance in Canada. Panelists:

CJFE will also be announcing the launch of a new tool to help Canadians better understand the scope of mass surveillance programs at the event. “Without oversight, transparency or accountability, mass surveillance has spiraled out of control. It poses a serious threat to our rights and freedoms,” said Tom Henheffer, Executive Director of CJFE. “It’s time for a comprehensive, national debate about what we as Canadians expect from those working to ‘protect’ us.” Event details: Snowden Live: Canada and the Security State When: 12-2 p.m. Wednesday, March 4, 2015 Where: RCC 103, Rogers Communications Centre, Ryerson University, 80 Gould Street, Toronto Tickets and more event details: cjfe.org/asksnowden The event is being produced in partnership with Ryerson University and the CBC. Canadian Journalists for Free Expression (CJFE) CJFE monitors, defends and reports on free expression and access to information in Canada and abroad. Rooted in the field of journalism, we promote a free media as essential to a fair and open society. CJFE boldly champions the free expression rights of all people, and encourages and supports individuals and groups in the protection of their own and others' free expression rights. cjfe.org – 30 – For more information: Laura Tribe National and Digital Programs Lead, Canadian Journalists for Free Expression (CJFE) 416-515-9622, ext. 232 [email protected]