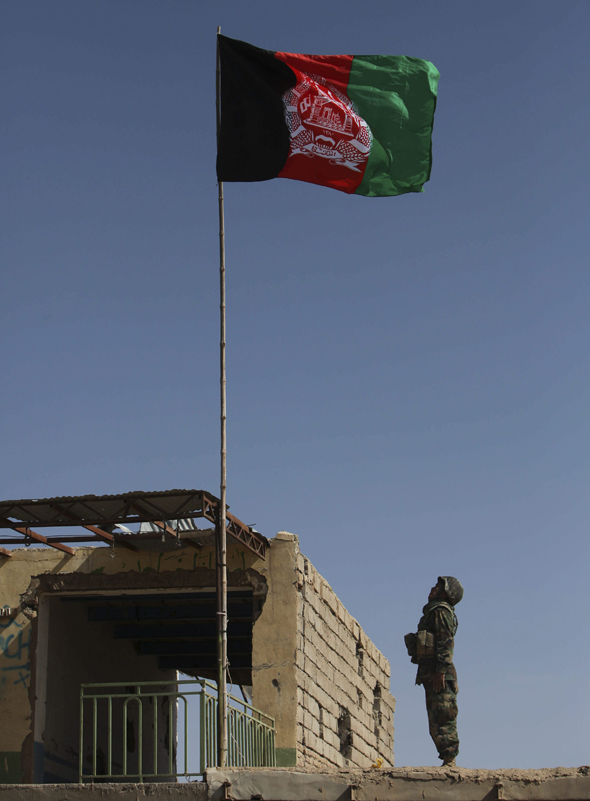 An Afghan Army soldier salutes an Afghan flag after raising it in a market in Marjah, Afghanistan.
PHOTO: AP/Altaf Qadri

CJFE condemns the recent murder of freelance journalist Yama Behroz in Faizabad, the capital of Badakhshan province in Northern Afghanistan. Behroz was murdered when an Improvised Explosive Device (IED) placed on his doorstep exploded on September 18, 2015. Reports suggest Behroz was called after the IED was planted and was asked to come out onto his doorstep. Behroz was a recent journalism graduate who was working as a freelancer with a local media organization.

Although this incident is the first to take place in Badakhshan province, Yama Behroz is the second journalist murdered in Afghanistan this year. On Friday, January 16, Aqil Mohammad Waqar, a 20-year-old journalist working with Speenghar Radio in Nangarhar province, eastern Afghanistan, wasshot dead by unknown gunmen at a wedding party.

Afghanistan continues to be a dangerous place for journalists. Afghanistan currently ranks sixth on theCommittee to Project Journalists’ (CPJ) Global Impunity Index. Reports from the Afghan Journalists Safety Committee and the Social and Cultural Organization indicate over 100 registered cases of threats to and violence against journalists in 2015 so far. The cases include verbal abuse, threats, physical violence, sexual harassment and beatings, with incidents occurring both in and outside the field, as well as at the workplaces of the journalists. On April 4, 2014 two Associated Press journalists were shot by an Afghan police officer, wounding Canadian reporter Kathy Gannon and killing German photographer Anja Niedringhaus. The police officer was convicted and given a final sentence of 20 years in prison for the murder, marking a rare instance of justice in such attacks.

CJFE recognizes the Afghan government’s commitment to supporting freedom of information, and is encouraged by legislation introduced by the government aimed at improving the climate for press freedom. However, this recent killing marks a concerning continuation of the trend of violence against journalists in Afghanistan.

CJFE calls upon the Afghan authorities to demonstrate a continued commitment to ending impunity by identifying and enforcing legal sanctions against those involved in the attacks against Yama Behroz. CJFE further urges the Afghan authorities to ensure the safety and security of local media workers, who remain at risk and often lack the protection of international media organizations.