“Do you like being watched?” CJFE launches #MyPrivacy campaign ahead of Bill C-51 week of action 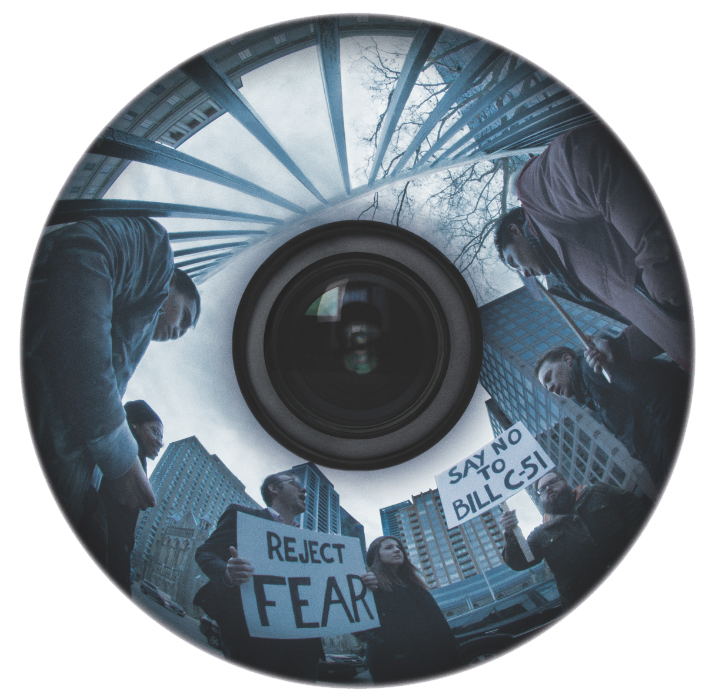 Toronto, ON (January 18, 2016) — Canadian Journalists for Free Expression (CJFE) has launched the #MyPrivacy campaign to raise awareness on Bill C-51’s privacy violations while bringing the public’s concerns about the legislation back into the national spotlight.

The campaign follows a Charter challenge filed by CJFE and the Canadian Civil Liberties Association (CCLA) in July on the grounds that five sections of Bill C-51 unjustifiably violate the Canadian Charter of Rights and Freedoms. Since coming into power, the Liberal government has promised to repeal what they deem the “problematic elements” of the bill, and recently announced an intention to hold a broad consultation process. In light of this commitment to a consultation, CJFE is providing Canadians with an opportunity to make their voices on the issue heard. CJFE aims to set the political agenda before the January legislative session begins.

This campaign centers on an image of a reflective human eye, evocative of a surveillance camera lens, alongside the caption “Do you like being watched?” This visual representation of the increased privacy violations we face provides a startling reminder of the dangerous surveillance infrastructures that can easily go unnoticed. Using an online photobooth, users can generate and share a disturbing image of themselves inside the eye, as if being surveilled, to tell Prime Minister Justin Trudeau and the government that they stand against digital surveillance and welcome a national conversation on Bill C-51.

The campaign launched in advance of a Bill C-51 week of action, running from January 18 to 24, 2016. During the week, a range of civil society organizations will be pressing the government for broad consultations on C-51 legislation and encouraging Canadians to contact the offices of their ministers and local members of parliament directly to talk about C-51.

CJFE’s #MyPrivacy campaign joins the efforts to engage the public in a national dialogue about Bill C-51 and hold the government accountable for their consultation promises and responsibility to protect Canadians’ rights and freedoms.

“No legislation has had more of an impact on free expression and civil liberties in recent history than C-51,” says Tom Henheffer, CJFE’s Executive Director. “It is dangerously overbroad, unjustifiably encroaches on the rights of Canadians, and needs to be scrapped or dramatically amended. To do so properly and transparently, our new government must engage in robust dialogue with Canadians, experts and civil society organizations.”

CJFE invites Canadians to make their concerns about privacy and digital surveillance known by participating in the #MyPrivacy campaign, and help ensure an open consultation process about Bill C-51 is enacted by the government by contacting their representatives in parliament.

For more information about the #MyPrivacy campaign, visit cjfe.org/myprivacy.

Canadian Journalists for Free Expression (CJFE) monitors, defends and reports on free expression and access to information in Canada and abroad. We promote a free media as essential to a fair and open society. CJFE boldly champions the free expression rights of all people, and encourages and supports individuals and groups in the protection of their own and others' free expression rights. cjfe.org