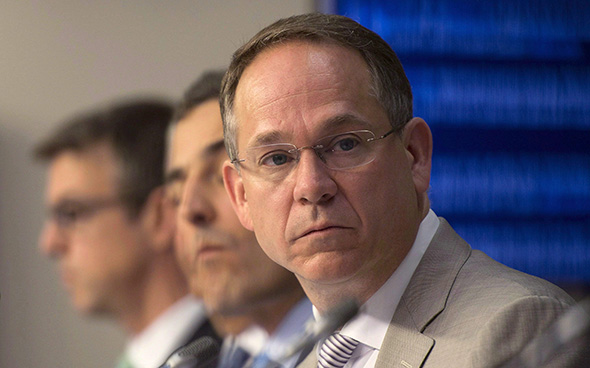 Bell Media President Kevin Crull listens to an associate make a presentation during CRTC hearings on the future of television in September 2014. Canada's broadcasting regulator has a sharply worded reminder for Bell Media that it should not be interfering in the work of journalists at its television network CTV. The warning follows a Globe and Mail report that says Crull intervened in how journalists reported a major regulatory decision last week. PHOTO: CP/Adrian Wyld

The merger of the Postmedia and Sun Media chains, which together own close to half of Canada’s daily newspapers and many community weeklies, surprisingly doesn’t mark a new peak in Canadian media ownership concentration. Pre-merger Postmedia was a fragment of Winnipeg-based Canwest, which also owned many of the papers Postmedia has just acquired from Sun as well as Global Television.

Ottawa, Calgary and Edmonton no longer have two subscription-based newspapers under separate ownership, though they do have Torstar-owned Metro in each. Of the four Toronto dailies, the National Post and the Toronto Sun now both belong to Postmedia. The acquisition vaults Postmedia past Torstar to number one in newspaper market share, but the four largest companies do have slightly less of the newspaper market than in 2004, says Dwayne Winseck, a Carleton University journalism professor and founder of the Canadian Media Concentration Research Project.

Still, Canada’s traditional media are in relatively few hands. Is that bad news?

Ownership can affect coverage. In March, Kevin Crull, president of Bell Media, disliked a Canadian Radio-television and Telecommunications Commission (CRTC) decision affecting his company. He ordered CTV, which Bell Media owns, to keep CRTC Chair Jean-Pierre Blais off television news that day, leading to cancellation of an interview. By the nightly newscast the CTV news team gathered their courage and showed Blais anyway.

The Globe and Mail (of which Bell Media owns 15 per cent) reported the incident. Crull apologized, then stepped down two weeks later.

In the early 2000s, Canwest required papers to run editorials written at head office, spiked columns critical of its policy and fired Russell Mills, publisher of the Ottawa Citizen, for not clearing with head office an editorial and article on scandals surrounding then Prime Minister Jean Chrétien.

The documentary was pulled days before it was to air on Global’s 16x9 program, after a synopsis had been posted on Global’s website. When that synopsis disappeared, a reader alerted Jesse Brown, editor of Canadian media news site Canadaland. He called Livesey and Ron Waksman, the national director of editorial and online news who made the decision. Canadaland reported that Waksman cited concerns about balance and said a revised documentary might air later. Then Global ended its relationship with Livesey. Livesey isn’t sure why, though Global may have believed he leaked the story to Canadaland, which he and Brown both deny. Global said in an e-mail that “this was purely an editorial call and there was no corporate or outside interference in the decision.”

Was there interference? Livesey says he doesn’t know. Brown says interference is rarely as overt and deliberate as many outside the media think. He does believe—as do others interviewed for this story—some stories don’t get covered because of concerns about what higher-ups will think. Influence, Winseck says, doesn’t always require intervention.

Concentration isn’t desirable, but, asks Paul Knox, associate professor at the Ryerson University School of Journalism, “How do you have a remedy that doesn’t constitute an assault on freedom of expression?” Good question. Regulating content would hardly be better. The Davey and Kent commissions, which reviewed the concentration question in 1970 and 1981, recommended ownership restrictions, provoking protest from media owners and some journalists, concerned newspapers would simply fold for lack of buyers.

The restrictions didn’t happen. Still, Jacques Poitras, author of Irving vs. Irving, a book on the family that controls most of New Brunswick’s media along with extensive business interests, notes that following the investigations the Irvings took a hands-off approach to their media holdings, apparently fearing forced sales. Today, James Irving, a great-grandson of patriarch K.C. Irving, is publisher of theTelegraph-Journal.

But does newspaper and broadcast ownership matter as much when online alternatives likeRabble.ca, The Tyee and Canadaland are proliferating? Along with many local news sites and blogs, they offer alternatives to established local media.

“I don’t think we have to worry so much about a narrow range of information,” says Poitras.

Hamilton journalist Joey Coleman started The Public Record, an online project covering city hall, because “somebody needs to figure out how to rebuild media, especially at the local level.” The Public Record relies on crowdfunding—asking people who value its work to donate to keep it going. Right now, Coleman admits he barely scrapes by. Alternative online media aren’t big enough to fill the gap today, Coleman says. “It’s going to be five to 10 years.”

When Linda Solomon Wood came to Vancouver after living in New York and Paris, she thought the city’s two newspapers—both owned by the same company—didn’t compete as aggressively as those other cities’ papers did. She started the online Vancouver Observer in 2007, and recently started theNational Observer.

Also crowdfunded, the National Observer focuses on energy, environment and politics. “It takes enormous resources just to do that and do it well,” Solomon Wood says. While the Observer can’t match the pay a journalist with 20 to 30 years’ experience would get at Postmedia, she says, “If you look across the spectrum of what people are making, we’re in a decent pay range.”

Canadaland is also crowdfunded. It has made its mark, for example, by working with the Toronto Starto break the story of CBC host Jian Ghomeshi’s dismissal. But, says Brown, “Unfortunately, Canadaland is only one of a handful” in this country.

Lacking deep pockets, these outlets are vulnerable to lawsuits. “It’s an existential threat for us to get a big story wrong,” Brown says, though on the other hand he argues some larger companies may “settle even when they’re right because it’s easier.”

Imports from the livelier U.S. online media scene play a role too. The Huffington Post, Buzzfeed andVice have Canadian editions or content, Brown notes, and substantial resources. Though the possibility of U.S.-based outlets dominating Canadian online media concerns him, “they are hiring good journalists and they have already done good work and could continue to.”

Christopher Dornan, associate professor of journalism at Carleton University, says media are becoming less monolithic and more specialized. “The media environment looks a lot more like the magazine industry.” That can be good, he says, because mass-market media have always sought a broad audience, meaning little attention to niche interests and reluctance to offend the majority.

Diversity depends at least partly on new media. It also depends on the efforts of people like Jesse Brown, Joey Coleman and Linda Solomon Wood who launch alternative media, like Bruce Livesey who pursue stories proprietors might not like, like Neil Reynolds who as the new editor of the Irvings’Telegraph-Journal in 1993 abandoned his predecessors’ caution with a front-page story on K.C. Irving’s unusual will, like James Bradshaw, The Globe and Mail reporter who broke the story of editorial interference by Kevin Crull of Bell Media, a minority shareholder in his own newspaper. It is harder when journalism jobs are scarce, but editorial integrity can’t be left to media owners, no matter who they are.