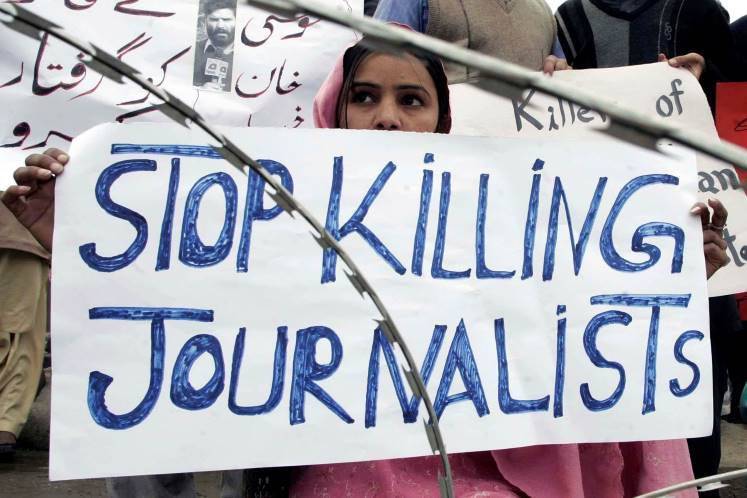 Over the past three decades, the organs of power in Pakistan have gradually and systematically strengthened a tyrannical grip over freedom of expression. A combination of politically-motivated violence and retaliation against journalists, Orwellian cybercrime legislation, repressive cultural conservativism, and blasphemy laws make the country one of the worst in the world for the free expression of ideas, dissent, and criticism.

Pakistan currently ranks among the 10 worst countries for internet freedom and is eighth on the list of 10 worst countries for journalists, according to the Freedom House and Committee to Protect Journalists (CPJ), respectively. The responsibility for this state of affairs rests will all of Pakistan's Major political parties. The ruling Pakistan Muslim League (PML-N), Pakistan People’s Party (PPP), and Pakistan Tehreek Insaf (PTI), have each failed to defend the democratic rights of Pakistan's people, and share responsibility for these abysmal rankings.

All of these parties have armed wings with a history of violence towards members of the press. In April of 2016, Pakistan Tehreek Insaf (PTI) workers physically assaulted a TV cameraman. In October, PTI workers attacked a Geo News DSNG van in Swabi. In 2014, PTI also attacked and ransacked the property of the state owned Pakistan Television PTV. PTI chief Imran Khan’s has even openly trumpeted these attacks as a selling point for his party.

Additionally, in August of 2016, the Muttahida Qumi Movement (MQM) attacked the office of ARY News and SAMAA's DSNG van, leaving one cameraman injured. All the attackers from the PTI and MQM have been granted impunity.

Journalists and media persons killed/ injured in 2015 in Pakistan:

Journalists and whistleblowers in Pakistan face intimidation and physical harm from politicians, religious radicals, law enforcement agencies (LEAs), political parties, and sectarian groups. On many occasions, torture from LEAs, financial penalties, and immense social pressure combine to effectively strip from journalists the ability to meaningfully exercise their legal press freedom rights. Though the Press Council of Pakistan (PCP) guarantees such rights to all the journalists in the country, they have never been honored in practice.

The case of journalist Cyril Almeida offers an illustrative example. Almeida came under fire in October 2016 for his story about a meeting between the elected government and the powerful military. The civilian-led interior ministry immediately put Almeida on the notorious Exit Control List (ECL), barring him from leaving Pakistan, and threatened him with worse consequences.

The PECB makes citizens’ data accessible to LEAs, and includes no clause for data protection. This bill has been widely opposed and criticized by senators, human rights activists, and civil society members for criminalizing much of the research necessary for journalists, whistle-blowers, academics, and intellectuals to do their jobs. In addition to its intentionally vague language, it also contains loopholes for LEAs to use the law against citizens. Its clauses related to cyberterrorism are dangerously ambiguous, giving LEAs the wide latitude to use to their powers to block or delete online material.

One of the most concerning aspects of this instrument of political manipulation is the bill’s lack of specific limitation on the retention of data.

While commenting on the bill, Senator Farhatullah Babar said, “it was meaningless to pass a cybercrime bill without first enacting a data protection act. Around the world, comprehensive laws are put in place before enacting cybercrime legislation.” But the bill itself lacks safeguards for individuals’ data.

PECB arms the government with the sweeping powers of censorship, surveillance, and codified rights violations. David Kaye, the United Nations Special Rapporteur on Freedom of Expression, wrote that section 29 of PECB “facilitates state surveillance that potentially undermines the exercise of the right to freedom of opinion and expression.”

In October, the province of Sindh leveled a brutal assault on privacy with a clause in the National Authority for Counter-Terrorism (Nacta), which legalizes LEAs’ access to citizens’ internet, telephone, social media, WhatsApp, and financial transactions.

Empowering LEAs with such powers in a country where, according to the South Asian Terrorism Portal (SATP), 3682 people were killed in 2015 during 2015 encounters with LEAs and where torture remains the prime tool of coercive confessions, puts not only journalists and whistleblowers, but all segments of society at great risk.

Censorship
In October 2016, the government granted extensive powers to Absar Aslam, chairman of the Pakistan Electronic Media Regulatory Authority (PEMRA), to revoke licences and shut down electronic and print media without prior warning. Such decisions are at the whim of the perceptions and discretion of the politically appointed individuals heading such departments. There are a number of examples of such powers being abused in the recent past.

The Central Board of Film Censors (CBFC) chairman Mobashir Hassan banned the film Maalik in early 2016 without any investigation or inquiry. The ban was later lifted by the Supreme Court of Pakistan, but cinemas remained reluctant to play the film, fearing subsequent backlash.

In May 2015, PEMRA banned the TV series “Udaari.” The series was funded by an NGO and sought to expose the taboo topic of sexual abuse. Sexual abuse is enormously underreported in Pakistan, and is often swept under the rug by the families. In the rural areas especially widespread abuse is committed in Maderssahs (seminaries), and no one dares to utter a word against it. This is a dreadful tragedy that, if revealed, often leads male family members to target the victimised women for so-called ‘honor killings’.

The movie Slackistan, depicting the rising western-inspired youths in Pakistan, was never allowed to air due to its scenes that showed alcohol consumption, and mocked the Taliban.

In May, PEMRA banned all TV advertising for contraceptives, even though Pakistan is the world’s sixth most populous nation where almost half of the children suffer from malnutrition, and 38.8% of the population live in poverty.

In June, PEMRA banned host-actor Hamza Ali Abbasi of Aaj TV and scholars Kokab Noorani and Shabbir Abu Talib of TV One for criticising the constitution, which declares Ahmadis a non-Muslim minority.

Blasphemy
According to a report published by the US government advisory panel in 2014, “Pakistan used blasphemy laws more than any other country in the world; listing 14 people on death row and 19 others serving life sentences for insulting Islam.”

The Constitution of Pakistan, the Pakistan Penal Code, and the Federal Shariat Court regulate blasphemy, which carries the death penalty or life imprisonment and which serves as the motivational factor behind many so-called honor killings. These laws are discriminatory and in overt violation of religious freedom, freedom of expression and other human rights, often providing fodder for mob lynching. At least 62 men and women have been killed on mere suspicion of blasphemy between 1987 and 2015, and an estimated 1,472 people have been accused under the blasphemy laws.

In 2014, a blasphemy case was registered against pop singer-turned-preacher, Junaid Jamshed, who publicly offered his apology and clarified that his remarks were misinterpreted. In March, he was roughed up at the Islamabad Airport.

Last June, one of the most-liked qawwals (religious folk singers), Amjad Sabri, was assassinated in broad daylight on a crowded street in Karachi. Later, the suspects confessed that the murder was related to the blasphemous comments made on a TV channel along with an activist Khurram Zaki. Khurram had also been murdered in May (a month earlier) alongside journalist Rao Khalid. Amjad was blamed by a rival TV host for committing blasphemy, and according to some insiders, this may have sparked hatred against him that ended in his murder.

In April 2015, an assistant professor of the University of Karachi, Dr Syed Wahidur Rahman, was shot dead in Karachi. He was expected to participate in the panel discussion, “Unsilencing Balochistan Take 3,” an issue for which another internationally known activist, director Sabeen Mahmud, was assassinated.

In the year prior, Prof Dr Muhammad Shakeel Auj, dean of the faculty of Islamic Studies at Karachi University, and Prof Syed Sibte Jafar were killed, and Debra Lobo, the vice-principal of the Jinnah Medical and Dental College's student affairs wing, was badly wounded in a gun attack. They were all targeted for exercising their rights to freedom of speech.

Blasphemy laws are clearly a licence to kill in Pakistan. Among hundreds of citizens, Federal Minister for Minorities Affairs Shahbaz Bhatti and a powerful governor of Punjab – Pakistan, Salman Taseer, were assassinated in January 2011, just for saying that such laws would be reconsidered.

Among many brutal murders and mob killings related to the blasphemy laws, the mob lynching of a young Christian couple Shama and Shahzad was one of the grisliest. The two were accused of desecrating a Quran, and local mosques issued a call to gather at the brick kiln where the couple worked as bonded labourers. They were torn from their home by the assembled mob, dragged behind a tractor on a dirt road, thrown into a brick kiln and burned to death.

Disastrously, while the climate grows more dangerous for journalists, whistleblowers, reformers, intellects and academics, the West—including Canada—is fast closing the borders for those who seek refuge, who risk theirs and their family’s lives for a better world by fighting bullets with the pen. These people, branded as Kafir (infidel) and rebels, face death and prison at home or denial of entry in the countries they try to take refuge in. The rise of far-right groups and parties in Europe, widespread xenophobia, and recent spike in hate crimes suffocate those who speak up against injustice, tyranny, and human wrongs.

The moderators and activists are faced with the dilemma of misinterpretation and deliberate misrepresentation. Speaking up for minorities or working for religious harmony had gotten brave people killed, people like Amjad Sabri, Hamza Ali Abbasi, Kokab Noorani, Shabbir Abu Talib, Salmaan Taseer and Pervaiz Bhatti.

The future of freedom of thought and freedom of expression in Pakistan depends upon the courage of people like them, people like Zeenat Shahzadi, who stand in defence of universal values against the forces of reaction, superstition, bigotry, and political expediency. They need, and deserve, our support and solidarity.