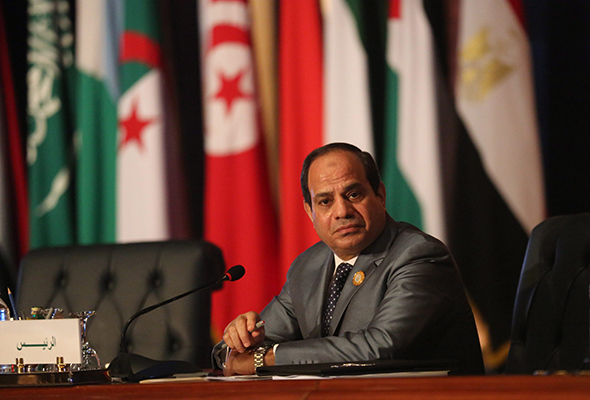 After a series of militant attacks, the government of Egyptian President Abdel Fattah el-Sisi is pushing through a new controversial anti-terrorism draft bill that would set up special terrorism courts, shorten the appeals process, give police greater powers of arrest and imprison journalists who report information on attacks that differs from the official government line PHOTO: AP Photo/Thomas Hartwell

A new anti-terrorism law introduced in the wake of the assassination of Egypt’s public prosecutor, Hisham Barakat, has disturbing implications for the future of press freedom in the country. The draft law criminalizes 25 offences, 12 of which are punishable by death, that relate to deviating from the officially sanctioned government narrative in terrorism cases. It is currently awaiting approval from President Abdel Fattah el-Sisi.

The law constitutes the latest, and arguably most egregious, violation of the right to free expression in Egypt, a country where dozens of journalists are currently unjustly imprisoned, civil society has beenrepeatedly targeted and public demonstrations have been effectively outlawed. Egyptian press freedom groups, including the Arabic Network for Human Rights Information and the Egyptian Journalists Syndicate, have condemned the proposed law, which aims to “[accelerate] court procedures of terrorism-related crimes through shrinking the litigation period [and] enhancing the jurisdiction of police officers and prosecutors involved in terror crimes.”

Some of the crimes outlawed in the draft legislation include “publishing false news or statements about terrorist operations in contradiction to official statements” and “reporting figures that contradict official statements...if ‘intent’ or ‘malice’ can be proven.” This latter charge appears to be a response to the discrepancy between the official military account of a terrorist attack in Sinai last week and reporting by international media outlets; while a military spokesperson stated that 17 Egyptian soldiers were killed, some international media reported numbers closer to 70.

During a press conference to discuss the Sinai attacks, journalists in attendance were given a “style guide” with a list of preferred terms for writing about terrorist groups with self-professed Islamic roots:

It’s unclear whether deviating from the list of terms outlined in the above memo would be enough to face anti-terrorism charges for offending journalists. Considering that journalists in Egypt already struggle to conduct their work without attracting government ire, the new law with its expanded powers would essentially strangle reporting on any matters that could be even tangentially linked to national security. The definition of “terrorism” is so broad and subject to interpretation by government officials that unbiased reporting already falls within it—see the well-documented cases of journalists currently jailed in Egypt. The ominous potential consequences of the draft law only add to this existing landscape.

The law could make it a crime to report critically on the trials of political prisoners and human rights defenders facing anti-state charges, not only threatening access to information about these cases within the country but also for countries around the world. Many other news organizations currently operating in Egypt, international or otherwise, could see their licenses revoked and their employees charged for straying from the government line. If journalists are not able to report freely in the country, coverage of human rights violations and other issues of public interest will be severely compromised.

This latest legislation appears to be part of a broader attempt to homogenize public discourse in Egypt under the guise of guaranteeing national security. It seems this is what President el-Sisi had in mind when he spoke at the funeral of Hisham Barakat, saying “The hands of swift justice [are] chained by law.”

What must be recognized is that “swift justice” threatens to impede substantive justice when it is privileged over due process, government transparency, and an active and engaged civil society. CJFE strongly urges Egyptian President Abdel Fattah el-Sisi to either repeal or substantially amend the draft anti-terror law and undertake serious policy revisions to improve conditions for press freedom in the country.