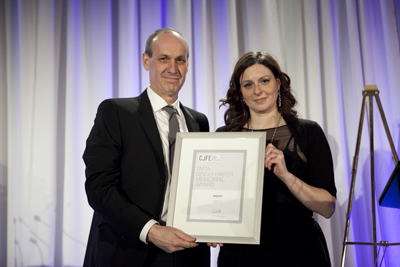 Alain Gravel and Marie-Maude Denis accept the Tara Singh Hayer Award on behalf of Radio-Canada's program Enquête at the 2012 CJFE Gala: A Night to Honour Courageous Reporting. Watch the video or read their speech below.

Alain Gravel: Thank you for this honour. Just a word to say how we are proud of what we did collectively at Enquête. We are a group of journalists, producers, researchers, cameramen and soundmen who are dedicated to our job. But it’s more than a job. We are on a professional mission looking and digging for the thruth whithout bias. Bosses are rarely praised, but in our situation we have received extraordinary guidance from them. Mainly Jean Pelletier (who is here with us today), who had the vision and saw the potential when creating our program some 6 years ago. And we couldn’t do what we do without strong support from our law department. We have a strong team of female lawyers… you know… the kind who don’t forget anything! They live in the details, they question us, sometimes even aggravate us. But they do all of this with the spirit of moving us forward, not to prevent us from getting to air. And mostly, I’d like to thank Radio-Canada which supported us endlessly and strongly in our work. It proves, despite its critics, that an organization like Radio-Canada and CBC are essential in a free society like ours. Faire du journalisme d’enquête, ça demande des reins solides, une tradition d’excellence, du courage et des moyens. Ce genre d’opération n’est pas toujours rentable commercialement. Rares sont les entreprises de presse qui ont la volonté d’aller au fond des choses et qui ont les moyens d’en assumer les conséquences. Radio-Canada in that context, served very well the interests of the population of Quebec, in giving us the means to investigate. And at the end of the process, most people in Quebec are convinced that the operation is paying off. As an example, since the broadcasting of our reports and the ones of other journalists, the cost of big public work contracts in Montreal fell 30%. Who said that Radio-Canada and CBC cost too much?!! I hope that journalists in the other regions of the country will follow our path in investigating public contracts and construction scandals. In doing so, maybe they’ll discover that there’s no Quebec gene of corruption. Maybe, they will see that the phenomenon is more widespread than they imagine. Not only behind the mask of Bonhomme Carnaval! Merci. Marie-Maude Denis: We would like to thank the Canadian Journalists for Free Expression. I would also like to address special thanks to our courageous sources. Many of them are anonymous, ordinary people who will remain in the secret of our investigation. They went through the stress of fearing to be exposed, but they will never get the credit for some of the crucial information they provided to us. They are heroes and the Quebecers should be grateful to them. This award is for them. Thank you.