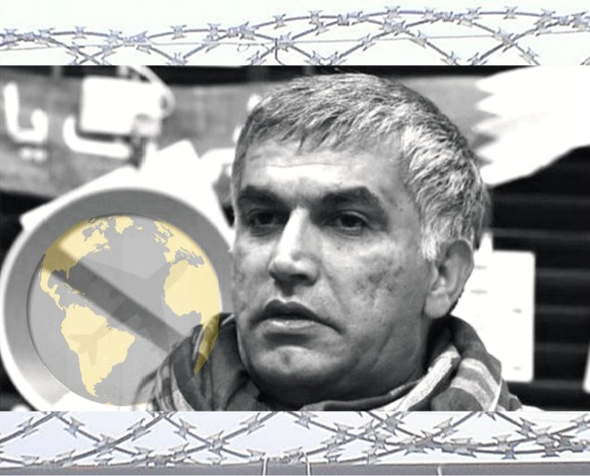 On 19 November 2015, Member of the European Parliament Mr. Pier Antonio Panzeri, together with 80 Members of the European Parliament (MEPs), issued a letter to Bahrain’s King Shaikh Hamad bin Isa Al-Khalifa, calling on the Bahraini government to immediately lift the travel ban and drop all charges against human rights defender Nabeel Rajab. The undersigned 20 international NGOs welcome the letter and echo the call to lift Mr. Rajab’s travel ban and end the judicial harassment against him.

Mr. Rajab, a prominent human rights defender, is currently subject to a travel ban and faces up to 10 years in prison for exercising his right to freedom of expression in Bahrain. Mr. Rajab is President of the Bahrain Center for Human Rights (BCHR), Founding Director of the Gulf Centre for Human Rights (GCHR), Deputy Secretary General of the International Federation for Human Rights (FIDH) and a member of the Advisory Committee of Human Rights Watch’s Middle East Division.

Mr. Rajab previously served a two-year sentence in 2012 for three cases related to his participation in peaceful gatherings in favour of fundamental freedoms and democracy. On 1 October 2014, he was arrested and detained for one month over a tweet he wrote while in Europe, and was sentenced to six months in prison on 20 January 2015 for “publicly insulting official institutions.” He was released early after a pardon was issued by the King on 13 July 2015, following heavy criticism by the international community, and an Urgency Resolution issued by the European Parliament on his case on 9 July 2015. On the day of his release, the Public Prosecution imposed a new travel ban on Mr. Rajab in relation to another criminal case, for which he had been previously arrested on 2 April 2015. He was charged with "insulting a statutory body" and “disseminating false rumours in time of war,” for which he could face up to 10 years in prison, following a series of tweets and opinion pieces he wrote in March 2015 regarding the treatment to which Jaw prisoners were subjected and Bahrain’s involvement in the Saudi-led coalition in Yemen.

In their letter (linked here), the MEPs highlight that the Bahraini government’s treatment of Mr. Rajab was in breach of international human rights law, as his detention violated the Universal Declaration of Human Rights and the International Covenant on Civil and Political Rights. Further, the MEPs recall the European Parliament’s Urgency Resolution of 9 July 2015 which calls for all charges against Mr. Rajab to be dropped, referring to his release as “only a ‘half measure’” as he “remains subject to a travel ban” which “greatly limits his freedoms and is a clear obstacle” to his human rights activities.

Furthermore the MEPs call for the implementation of the recommendations of the Bahrain Independent Commission of Inquiry (BICI)’s 2011 report, the UN Human Rights Council’s 2012 Universal Period Review on Bahrain, and the European Union’s repeated calls about the human rights situation in Bahrain, via the March 2012, January 2013, September 2013 and February 2014 Urgency Resolutions on the Human Rights situation on Bahrain. The signatory members of the European Parliament particularly condemn the “criminalisation of dissent and free speech” in Bahrain, and the ill-treatment and imprisonment of hundreds of human rights defenders, civil and political activists, including minors.

The signatory NGOs support the MEPs’ call to the government of Bahrain to respect its human rights obligations. Accordingly, we call on the Bahraini government to drop all charges against Nabeel Rajab and lift his travel ban, and fully implement the BICI recommendations and abide by its obligations under international human rights law. The European Union should concretely take action to prevent human rights abuses and stop the prosecution of peaceful human rights defenders by the Bahraini authorities.