Fahmy Presents Appeal to the United Nations to Protect Journalists 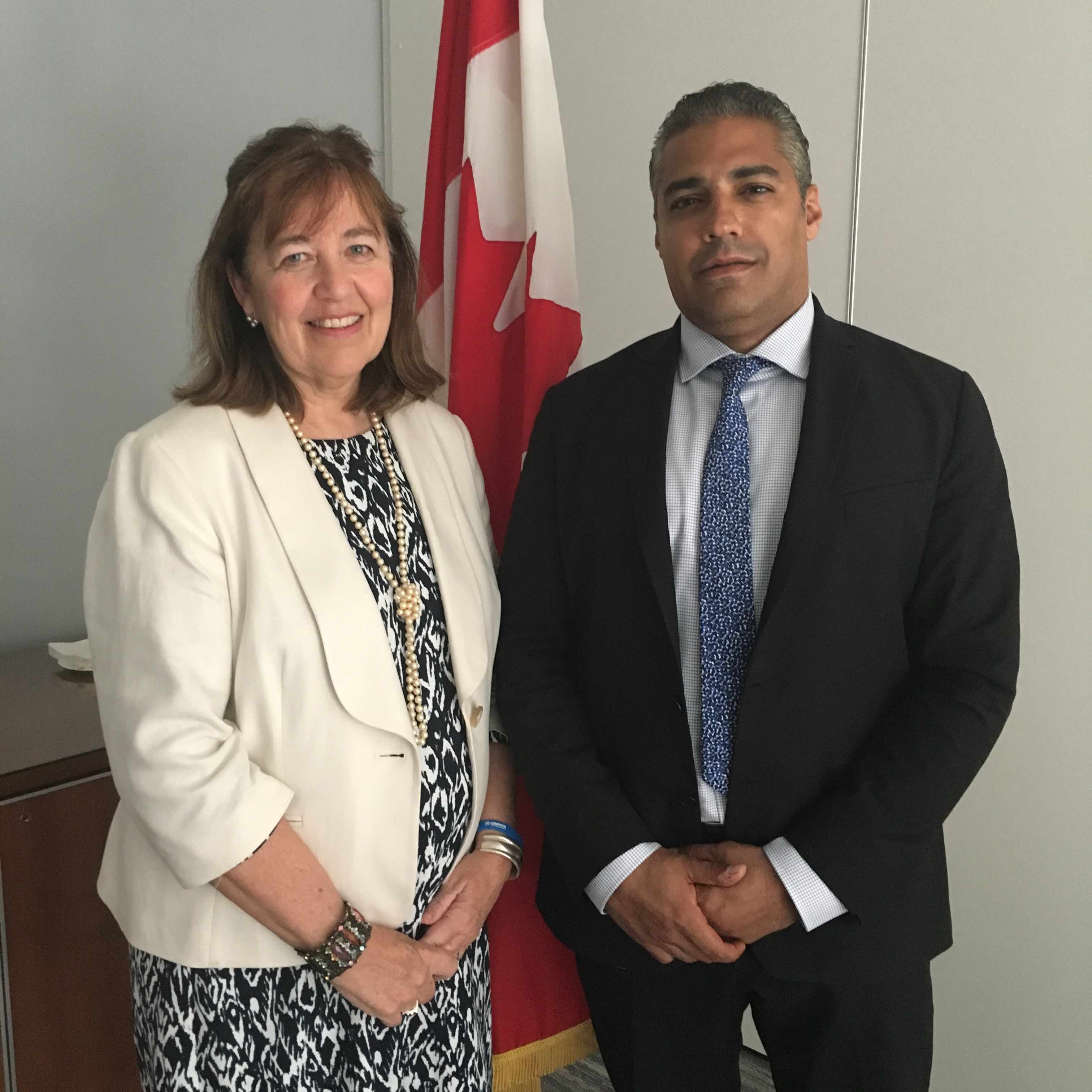 Canadian Journalists for Free Expression Board member Mohamed Fahmy was in Geneva this morning, and on behalf of CJFE President Alice Klein presented a letter to Ambassador Rosemary McCarney, Canada’s representative to the United Nations, formally requesting the appointment of a UN Special Representative for the Safety of Journalists.

The need for a Special Representative is critical as threats to journalists increase around the world. According to Reporters Without Borders, 787 journalists and media professionals were killed on the job in the last 10 years, including 77 in 2015.

Fahmy is president of the Fahmy Foundation, which provides advocacy and financial assistance to journalists and prisoners of conscience who are unjustly imprisoned around the world. The Fahmy Foundation and CJFE have joined a worldwide coalition of NGOs, media outlets, and journalists by supporting the initiative for the creation of a Special Representative to the United Nations Secretary General for the safety of journalists.

According to Reporters Without Borders, this “is an urgent issue for all those who want to end violence against reporters and defend access to information around the world.”

The coalition is urging the United Nations and its Member States to give this position the “political weight, capacity for rapid action and legitimacy” to coordinate UN efforts for the safety of journalists. The goal is to enforce international law and reduce the number of journalists killed every year.

We urge the General Assembly to appoint a Special Representative of the UN Secretary General for the Safety of Journalists as soon as possible. Around the world, journalists are being targeted in unprecedented ways, from kidnappings to cyber-attacks and even public killings. A press vest or a camera that once offered a semblance of protection for reporters often now serve more as a target.

There has never been a more dangerous time for journalists. They are being killed and imprisoned worldwide in record numbers. They face daily threats, attacks and intimidation from private individuals, non-state actors, and government officials who seek to silence them. The overwhelming majority of these crimes are committed with impunity.

According to CJFE’s research, 787 journalists and media personnel were killed while exercising their profession over the last 10 years, including 77 in 2015 alone. With their loss, the right to information for hundreds of millions of citizens is shattered. There have been various resolutions adopted in the past decade, including by the Security Council and the General Assembly, dedicated to this issue. Despite this, United Nations Secretary General Ban Ki-moon, in his August 2015 report on the safety of journalists, acknowledges the world’s “failure to reduce the frequency and scale of targeted violence that journalists face and the near absolute impunity for such crimes.”

These strong resolutions will continue to be little more than empty words without a concrete mechanism to assure the compliance of member states with their obligations. Only a Special Representative, working closely with the UN Secretary General, will have the political weight, the capacity to act quickly, and the legitimacy to coordinate with all UN bodies to implement change.

Progress has been made, but more needs to be done. We call on you to appoint a Special Representative of the UN Secretary General for the safety of journalists as soon as possible.