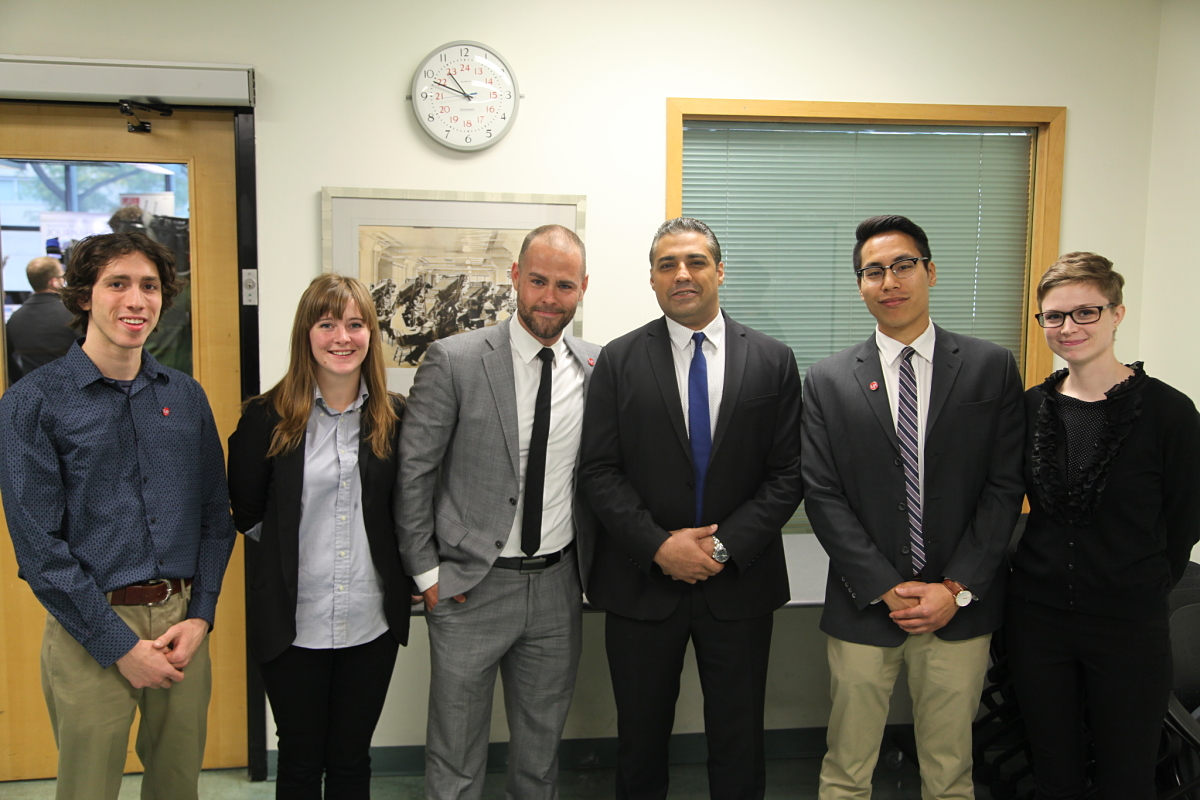 For the past four months, CJFE has had the pleasure of working with an amazing assistant for our annual Gala. Dustin has been an invaluable member of our team; his creativity, logistical skillfulness and dedication to his work and CJFE’s cause helped us throw the biggest and best Gala to date. We’re sad to see him go, but are excited to see all the great things he’ll get up to next. As we say goodbye on his last day, we asked Dustin to reflect on his time at CJFE.

What made you want to work with CJFE?

When starting here, I had no substantial knowledge of free expression issues, or even how non-profit advocacy groups really work. My background is in events–that is the main reason I took on this position. It was a good opportunity to develop my skills as an events professional, and I was enticed by the interesting topics CJFE deals with and the major players that they partner with. The work CJFE does seemed interesting and important, but I had no idea just how critical their work is. I was excited by seeing a list of past Gala sponsors, which included all the major banks, media outlets, etc. It seemed a cool novelty to work with some of the biggest organizations and corporations in Canada. However, I learned very fast that this support is not just cool or important, but crucial.

Another question I want to answer is why do I want to help CJFE in some capacity for as long as they let me? I have seen the effect of their work first-hand, have been shown the effectiveness of advocacy in general, and have been inspired by the drive that everyone involved with CJFE has to help people and make the world a better place. I now know that the commonly held view that one person or a small group cannot make a difference is unquestionably false. It just takes devotion, passion, organization and action, all of which CJFE embodies every single day

What have you learned about free expression from your time here?

Firstly, I have learned that free expression is a fundamental human right that almost everyone who has it takes for granted. Secondly, I have learned that the control of information is perhaps the primary factor that allows for tyranny. When members of a society are afraid to speak out or even have dissenting views in the first place, tyrannical groups (whether governments or militants) get to mould society how they see fit. This may take place in a more Brave New World framework where the government keeps their citizens content and complacent, yet utterly ignorant. Or it may closer resemble 1984 where fear deters dissent and physical force/violence is used to perpetuate that fear. Unfortunately, we live in a world where just about every nation has elements of at least one or the other, and many nations, such as Canada, has elements of both. We live in a world that echoes the greatest and most horrifying dystopian novels of all time, and that is terrifying.

What aspect of the Gala are you most proud of?

I am most proud of the solidarity that the Gala brings about in people from all walks of life. When you have personnel from left-wing newspapers standing alongside personnel from right-wing newspapers, new-school podcast hosts standing alongside old-school print journalists, and young students standing alongside Margaret Atwood, you know you are a part of something really special. We had Scotiabank, BMO, RBC and TD, who are generally all in direct competition with one another, putting aside their usual desire for sponsorship exclusivity to stand together in support of a single cause. That solidarity is what I was most proud of at the Gala, and during my time at CJFE in general.

What are you going to miss the most?

I am going to miss working with such an incredible number of driven, socially-conscious, hard-working individuals. This includes my coworkers first and foremost, but also countless others along the way. Whether it came from lengthy conversations or just subtle observations from afar, I got the opportunity to pick up little bits of inspiration from so many great people. Hany al Moulia, Brendan Bannon, Michelle Shephard, Dennis Edney, Mohamed Fahmy, Ken Rubin, Jameel Jaffer, Safa al Ahmad, Linda Sills, Alice Klein, Madeline Ziniak, Frank Switzer, the CJFE Board of Directors, Gala Chairs and Committee members, the staff of IFEX, Media Profile and Juniper Park, and many, many more.  I could not possibly list them all, despite my time here lasting a mere three months or so, and I am so honoured, humbled and incredibly inspired by that. In a sentence, I will miss being part of such a large network of incredible people.

What are you up to next?

A really great opportunity popped up as a result of my time at CJFE, and let’s just say I cannot see myself stepping too far from the non-profit world. I am far too inspired by what good intentions and organized action can accomplish.

Anything else you want to add?

I want to take a minute to give CJFE the praise they deserve. They are an unbelievably small team that does incredibly big work. Their intentions are so pure, their commitment to their work undying and their desire to grow is limited only by funding. I want to give praise for the work they are currently doing, and also for their drive to constantly push forward and do even more. I compel anyone reading this to become a member, donate, sponsor or just spread the word about this ever-important organization, so that they can make even more of an impact than they already are.

I would also like to thank Tom, Megan, Alix, Rignam and Taryn for giving me the opportunity to be on the team, and for being my mentors, my colleagues and my friends.