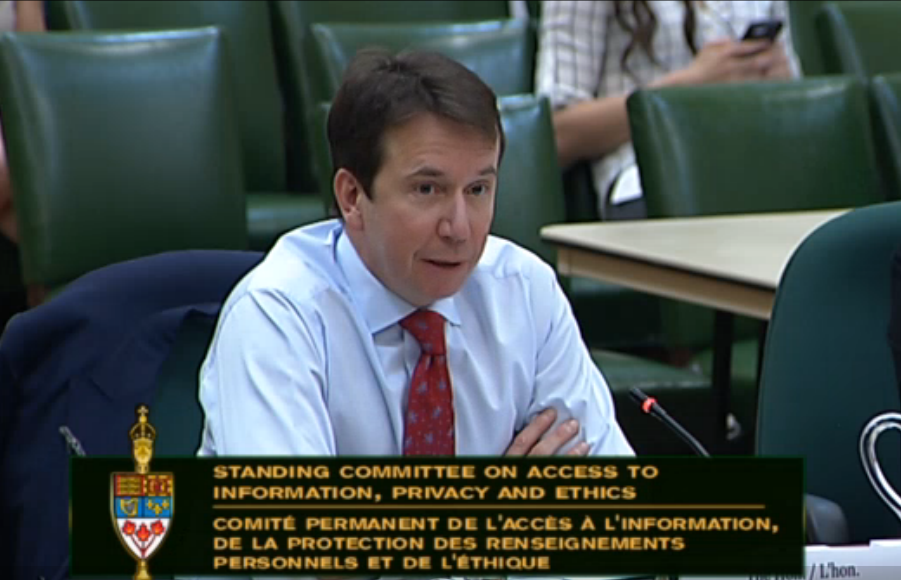 Treasury Board President Scott Brison outlines his plans to improve access to information before the Standing Committee on Access to Information, Privacy and Ethics. PHOTO: ParlVU.

Last October, CJFE launched a campaign calling on the federal government to revise the Canadian Access to Information (ATI) Act. The Liberal Party took note, committing to a variety of improvements to ATI in their 2015 platform.

Yet on May 3, the new Liberal government earned a C- on Access to information in CJFE’s annual Report Card on Free Expression. The report card stated, “Canada’s Access to Information (ATI) system is a mess, and it’s going to stay that way for at least two more years.”

While the ATI system in Canada remains broken, this grade represents an improvement on several years of abysmal failure. The new government has reversed some of the worst policies of the Conservatives—including unmuzzling scientists and reinstating the long form census—and had made some additional promises which were encouraging, if so far unsubstantiated.

Two days after we released our report card, Treasury Board President Scott Brison appeared before the Parliament of Canada’s Standing Committee on Access to Information, Privacy and Ethics, and announced changes that should go some way to improving the government’s ATI grade in next year’s report card. Brison announced the immediate implementation of the Interim Directive on the Administration of the Access to Information Act, which includes several sensible and long overdue reforms, including:

Brison also renewed his commitment to several promises the government made in the past, including:

The government has opened consultations for citizens to comment on their proposals, but will not undertake a full review of the Act until 2018—a long time to wait for a review that’s been overdue for decades.

Canada currently ranks 58th out of 103 countries on the Centre for Law and Democracy's Right to Information Rating, a comparative assessment of right to information laws from around the world. An updated ATI Law is desperately needed, ideally guided by the recommendations in Information Commissioner Suzanne Legault’s recent report to Parliament. There is much still to do to bring Canada’s ATI system into the 21st century, and to ensure Canadians have the access, tools and resources that are due by right to all citizens in a democracy. Still, these early steps are promising, and worthy of praise.